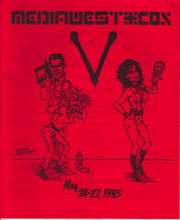 Some Facts About the 1985 Convention 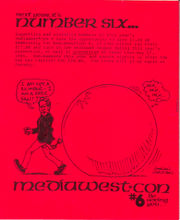 The con plays were "Mister Roger's Neighborhood" and "Cole Porter: The Search for Star Trek III."

According to Real 'con' finds fans talking film, camping it up, acting favorites, the top selling piece of art went for $651.

We are looking for any info on the pre-1998 vid show winners.

Panels included: "Guilty Pleasures," "Filksinging," "British Fandoms," More than Mary-Sue: Alter Egos and What You Can Do with Them," "V -- Pros and Cons," How to Start a Fanzine," Uses and Problems of Personal Computers in Fandom," "Fans and Lucasfilm -- The Sometimes Beneficial, Sometimes Adversarial Relationship," "Serious Cop Show and Why We Like Them," "Where are the Men in Media Fandom, & A Male of View of Women in SF Films & TV," "Fannish Phobias (are they different from mundane phobias?)" and "Syndicated Loves (why do some shows retain a fond spot in our hearts?)"