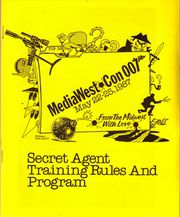 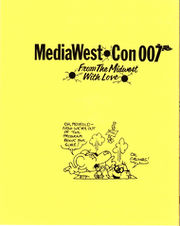 back cover of 1987 program book

Some Facts About the 1987 Convention 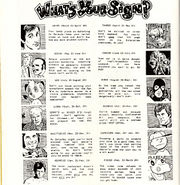 The fan fund winner in attendance was Maggie Nowakowska.

Some of the vids shown that year:

The official MediaWest*Con page says there was a Simon & Simon slash panel called "More than Brothers?" but it does not appear in the program book.

I think it was MW*C 7 -- it must have been -- because Blake's 7 was a really "hot" fandom that year and we all thought it would be the theme of the convention -- but it wasn't. I don't even remember what the theme actually was. But Dani Lane did a cartoon that said "Blake Was Here" and in the middle of the night a bunch of "rebels" plastered the flyer all over the convention. Then "someone" bribed the hotel staff to change the sign out front to say Welcome MediaWest Con B7. Of course, everyone involved denied involvement and I remember Lori Carleton just nodded and laughed. [1]

MediaWest was truly an experience! I thought I had outgrown my ability to get by on 3 hours of sleep, but I did it for that weekend. God, the hours spent discussing S&S! [A] and I didn't get in until late Friday evening, and were slightly tiffed... to find they had held the S&S panel at 3:00 that afternoon; so, we tracked down Lori Carleton and scheduled another Simon panel ("S/S: More than brothers?") for the following afternoon. It went very well, although after my initial ice-breaker of "So, you think they're doin' it?", the panel quickly turned into a S&S discussion. And then there was the on-going "who can out butthead everyone else" contest begun by [M U]. (The term "butthead" came from "American Justice", which Jack so lovingly called JP; so it seemed an appropriate name for anyone who did a real klutzy thing, like walk into a light fixture, etc.) We'd meet and compare points at intervals throughout the con; I thought [A] had amassed enough points to give us the championship, but, alas, [M U]'s team came through with some real butthead stunts, so they got the black-and-blue first place ribbon. (We did, however, all agree at the banquet that we would elevate Gordon Carleton to Grand Imperial Poobah Butthead and eliminate him from the running, as we all knew none of us could compete with him!) I guess that will give you a pretty fair indication of how MediaWest went, huh?.... Did pick up several very good S&S zines, most notably Bookends and Who Rides for Justice? #2, as well as More Than Brothers #7, The Brothers File, and Sweet Justice #3. [2]

Actually, MediaWest is an experience unlike anything else. For four days, I am able to put aside work and motherhood and be a fan.... I am able to step into this alternate universe of fellow fans and submerge myself in STAR WARS for days. It was such a different experience attending this year's con compared to last year's, which was my first. This year I barely got into my room when my phone was ringing and Carolyn was on the other line, glad that I had finally arrived. After meeting her, along with her bruised shoulder (but then what would you expect from. someone who trashes Han the way she does), I began to think about the task of unloading my car. (I am notorious for bringing three times more clothes and stuff than I need.) Anyway, I was fortunate enough to secure the aid of fandom's two most favorite husbands -- Mark Fisher and John Hennig -- to assist me with my baggage. After that I made a quick trip to the Dealers' Rooms and scarfed up my contributor' copy of FAR REALMS. It is like a reunion as you walk through the hallways of the Hilton. There are screeches of joy as friends run into other friends. Needless to say, there are a lot of tears and hugs. One really can't help but feel that there are a lot of kindred spirits greeting each other. I know that I have never felt so comfortable with so many new people so soon. The next three days are filled with trips to the Dealers' Rooms to search out the SW zines (of which there are getting to be a paltry few) and standing patiently behind another fan as she sifts through the boxes of stills that contain all of the wonderful photos so many of us enjoy collecting. Then there are the panel discussions, and those who were not in attendance may like to know that there were a great many who attended the one dealing with SW fandom. We all decided that we are still here and that perhaps we are just going through a bit of changing of the guard. I think that with all of the rumors surrounding the filming of the first trilogy, there will be an increased interest in our fandom. It is we fans who have to decide if we want to keep fandom going. Well, I guess that might be the subject of another article so I'll just leave it at that... We went to the Fan Q Awards presentation. Congratulations are in order for WOOKIEE COMMODE and SOUTHERN ENCLAVE for their awards. Saturday evening also features the costume contest, which I am afraid was a bit small this year, but nonetheless had some rather interesting entries. After that, it is party time. It is not unusual to walk down one of the halls of the hotel and see parties having spilled out into the hallways. Sunday afternoon was much the same as Saturday, with panel discussions and then more trips through the Dealers' Room. It seems as though no matter how many times one goes through those rooms, there are more things to see. Then, of course, there is the Art Room to go through. I spend a lot of time there in awe of some of my fellow fans' work. I had my eye on one Luke that I really wanted and prepared myself for what I knew would be strong bidding on him. Well, that night at the Art Auction, I was not fortunate enough to get the portrait I wanted. As I did last year, I had a good friend with me and instructed her to sit on my hand or gag my mouth if I went over my established limit. Though disappointed in not being able to add the wonderful portrait to my collection, I didn't feel too bad since it went for at least $75.00 more than I had intended to spend. The Art Auction is really a lot of fun. It is quite interesting to see two fans go head-to-head to see who's pocketbook will outlast the others. I often wonder how much strain is put on certain friendships, but basically it is all done in good fun, and the auctioneers are always ready to get some action going on hot items. It is really interesting what MediaWest seems to do to time. When I arrived Friday afternoon, I wondered what in the world I could do to fill up all the time until Monday afternoon when I left. By Monday afternoon, I was feeling really frustrated that I didn't get to spend a fraction of the time I wanted to spend with all of the people I wanted to spend time with. I had threatened a few of fandom's best authors to kidnap them and lock them in my room so I could pick their brains for ideas. But, alas, I guess I will just have to go back to letter writing. MediaWest is a truly wonderful experience. I wish that it could happen more often, but then perhaps some of the magic would be gone from it. Part of the wonder of it is that it is so rare and so special. I just want to say that I loved every moment I spent with all of you that I met, and I would encourage anyone who is half-way thinking about attending next year to start saving their pennies and make the pilgramage to Lansing, Michigan. I can guarantee you that you will not regret it. [4]