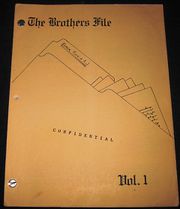 The Brothers File is a gen 382-page Simon and Simon anthology of fiction by Christine Jeffords.

In late 1985, the author wrote in Details at 11 #11 that "I still need 75 postcards to show interest in this collection of my original S&S tales. Come on, people, I'd like to get it out next fall!"

The zine ended up premiering at MediaWest 1987.

"Includes three never-before-published stories and several revised and improved ones."