Erm... I'm probably going to be hated by everyone now, but I've read all of #1 and the LoC's in #2, and have decided most of you have overly romantic views of Rick and A.J.'s relationship. You say that they care about each other, have deep affection towards each other, always seem to know what the other is thinking. They are brothers, you do get siblings who grow up close in this way. In fact, one of the reasons I like S&S is because they remind me of us. (Me and my sister) I also like the way the writers have taken all this sibling feeling and put it into the characters and plots without being overly sentimental.

I also like the way Gerald and Jameson can play the part of brothers also without being overly sentimental. Can you imagine the look of embarrassed horror if anyone sat down and analysed their relationship in front of them. I reckon Rick would say "Hell, we're brothers of course we care.” The only thing that makes them different from most other brother-brother or sister-sister relationships is that they happen to be Private Investigators. (we want to open up a book shop and call it 'Finger Prints')

It includes art by Ruth Kurz, Alan, and Julie Hancock.

This a British publication that is edited by Carol Hillman who is a avid "Simon & Simon" fan. This zine first started out looking like a very modest homemade affair and in just two issues grew in leaps and bounds with the third issue looking quite impressive and professional...

'Into The Darkness' by Laura Enright. Finally here we have a strong-willed A.J. who even though his is temporarily blinded insists on trying to take care of himself. Though I found the end to be kind of unbelievable as a newly-blinded A.J. must tackle and shoot a sighted man in self-defense still it was a very well-written piece. I was ever so glad to see the strong side of A.J.'s character coming out instead of the usual weak and suffering A.J. that I have seen too often in fan fiction. 'Two In The Bush' by Enna. Here A.J. gets a bullet to the head and tries to kill himself when panic and depression sets in over his injury. Rick must talk him out of it while trying to hide his own anxiety at witnessing his own brother attempting suicide. Even though this story has a tone of sadness to it it is very well done. 'Fatal Decision' written by Carol Hillman and Regina Marracino. This a a very well paced action story. Two mysterious FBI agents want only A.J. to help them on a case they are on. This leaves Rick feeling rejected and left out as the two brothers always work together. A.J. realizes the agents are phonies only when its too late and takes a bullet for his mistake. A.J. is found mission when his car is found parked outside of a seedy hotel at the scene of a double murder and its Downtown Brown and Rick to the rescue! 'In Spirit' by Carol Hillman. This one amplifies better than the television series has ever done the closeness of the Simon brother's relationship. Years later after his war days in Vietnam, Rick wakes after a nightmare and reveals to A.J. an odd experience he had back in the jungles of ' Nam. Obviously afraid someone would think he was crazy, he hadn't told a soul about his vision' of talking to A.J. while on night patrol in Vietnam. Afterwards A.J. has a shocking truth to tell Rick as well! 'Tardis on The Hill' was written by yours truly. The story combines the universe of "Hill Street Blues" meeting with Doctor Who's fourth regeneration. The hill is in trouble as a young boy is found dead of a new drug that the coroner cannot identify. The story works in the Movellans from the world of "Doctor Who" what are able to conveniently disguise themselves as modern-day Rastafarians. Though I wrote this awhile back, and despite some rough spots in it, I had fun rereading this story when I received my contributor's copy. Also included in this issue is a complete "Hill Street Blues" episode guide covering titles and air dates from the 1985-86 season. Also poetry includes "2604" written by Teresa Sarick which is a clever file poem after Robert Frost's 'Stopping By A Woods ... ' and 'Trip Wire' which explains Rick's edginess and his necessity for having his gun at his side ever since coming back from 'Nam. There's a complete scale drawing of A.J.'s house and a floor plan including the furniture lay out. There's some nice artwork here and cleverly placed photos where artwork was not available. There's a fine portrait of Capt. Furrilo on pg. 100 by Ruth Kutz. Same goes for her "Simon & Simon" illo on pg. 101 of the two Simon brothers sitting on the pier. A touching picture that shows the brotherly love that is shared between Rick and A.J. on pg. 63 by Ruth. A squad car in action, (p g. 81) no doubt racing the scene of a crime from the Hill Street station by artist Alan. A a nice simple sketch of A.J. by Julie Hancock on page 62. When this zine first started out it was meant to only concentrate on material from "Hill Street Blues" and "Simon & Simon". But recently in order to gather more material for the publication the editor has decided to open up the zine to all cop, detective, spy and adventure series. [2]

Brothers 'N' Blues was great. Monica and I just finished reading it. Loved your choice of Kathy's sketch for the front cover.

Glad to see you extended FATAL DECISION. This version is excellent. Enjoyed it very much. Also, IN SPIRIT was so good. I cried all the way through it. The Brotherhood Commercials were nice touches. Each edition gets more and more professional. [3]

I was blown away when I first took a look at Issue #3. It was beautiful, easy to read and quite handsomely put together. You outdid yourself this time! I was proud to be a part of this lovely issue. I hope you plan on making all future issues full sized.

Now for my critique of the material. "Into the Darkness". My question is, what is a "gapers block"? I can only assume it must be a British express for some traffic situation. It was nice to finally see A.J. depicted as more than just a weak accident victim. But it was a bit unbelievable that being newly blind, that he could have tackeled and shot a sighted man. Oh, well. Besides that small discrepancy, I enjoyed the story anyway.

"Two in a Bush." This was decidedly a very miserable story. It was enough that A.J. was shot in the head but to have two head injuries was too much to believe he could fully recover. Bullet wounds to the head are always serious let alone having to survive two of them. I though it was an overly dramatic plot line. I can't take much more of those "make A.J. suffer" stories. Don't you girls like A.J.?

"Fatal Decision" was one of the best Si&Si stories I've read in a while. It was a good mystery filled with drama and lots of action. Very well written and thought out.

"In Spirit." This was a very enjoyable story and well written from Rick's point of view. Surprisingly it reminds me of a true story Audrey Meadows, actress and wife of Steve Allen, once told on a talk show years ago. She was dreaming that her husband was falling out of a window and she pulled him back in and saved him. At the same time, her husband was also dreaming that he was falling out of a window. I've heard that couples that are close but this really demonstrates how close two people can become.

How did you get the titles of the ‘Hill Street Blues' episodes?? They aren't listed in the TV Guide nor shown on the credits.

I liked what you did with my story, ‘Tardis on the Hill". Especially the title page, the picture of Belker with the title printed on the wall. I thought that was a very clever idea. Those were handsome silhouettes of Joyce and Furillo on page 94. The unexpected yellow coloured paper makes it even more interesting.

The poem ‘Thank God!' by Carol Hillman was quite good. I only wish they'd do more episodes like ‘Double Play' that spotlight the closeness and especially that which Rick and A.J. share between them.

All in all, I don't have many complaints on Issue #3. Except problems that seem to haunt other zines as well, such as sometimes the ink is too light to read. And the paper used for the cover is a little too thin.

From the Desk of Adderly, Sue Anne [4] 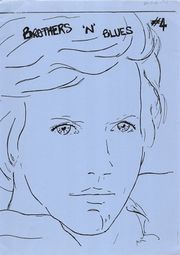 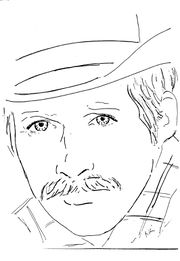 front cover of issue #4, B. Hancock

The illos are telepics by Carol-Anne Hillman, and other art by Trevor Hancock, B. Hancock, and Kathy Lachenauer.

This issue contains A LOT of publicity stills and advertising.