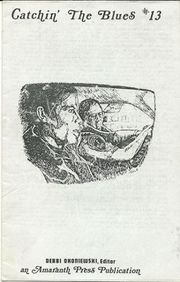 cover of the letterzine, Catchin' the Blues #13

HSB had a small but active fandom. Many fans came to the show through Starsky & Hutch, due in part to the subject matter and because there were at least two actors (Michael Conrad and Veronica Hamel) who were in both shows.

While HSB never had a complete fiction zine of its own, it did share a three-issue anthology with Simon & Simon called Brothers 'n Blues and a one shot with Starsky & Hutch called Blue Warriors, as well as a mini-zine with poetry, art, and puzzles called All Sorts of Heroes. There were a number of stories and poems in multifandom zines during the late '80s and through the '90s.

There was also a HSB letterzine called Catchin' the Blues.

Two proposed zines which never made it off the ground were: "Marv Box Memorial Zine" (fiction and such) and "On the Hill" (letterzine).