Just a Couple of Jokers 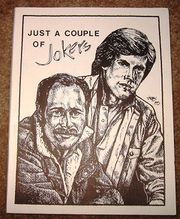 Just a Couple of Jokers is a gen Simon and Simon 166-page anthology of open letters, filks, stories and artwork.

It was the first all-fiction Simon and Simon zine published.

From an ad in Southern Enclave: "The first all Simon & Simon zine (that we know of!) is looking for submissions of fiction, filks, and art, as well as interested parties in such a zine. Aiming for a Christmas '85 printing."

This zine was notorious for having many typos.

Never judge a book by its cover. The cover of this one is nice. Good artwork. Title spelled correctly. Perfect bound. It looks like someone assembled this zine with a lot of care. But no one cared enough to beg, borrow or bribe someone who could type accurately. No one cared enough to proofread the zine. And no one cared enough to be very selective about the material that was accepted. Good things might have been expected from this first all Simon & Simon zine. L.A. Carr is a credible writer with a reputation for quality, in-character Si-Si. Add to that the fact that this is not a 'first' zine from Jumeau Press. Experience should be considered when deciding to pay for higher priced zines in any genre. Yet despite the fact that all indications were favorable for JUST A COUPLE OF JOKERS, this zine is a waste of money and a cheat to any serious reader of Si-Si fan fiction. We all expect typos. Typos are virtually impossible to eliminate. Even when a zine is peppered with them, perhaps some can be overlooked. Ordinarily, they are not all that distracting. But this zine is virtually unreadable because of the typos, misspellings, words and letters left out. Did no one bother to even glance at the final copy when it came out of the typewriter or off the printer? There are, literally, errors on every line of text in some stories. Condolences should go to those writers whose works are so butchered herein. Sadly enough, however, those writers, and those stories, have bigger problems than typos. Content-wise, JACOJ leave a lot. to be desired. The poetry is nearly all first-person, which never seems to work very well. It's filled with soapy sentimentality which is unnatural to the characters. One attempt at an epic poem, Out on a Limb by Phyllis Milby, doesn't scan—the lines are awkwardly worded. There are four vignettes ranging from mildly humorous to nearly offensive. Partners Again by Sue Wells is an unnecessary little piece which says nothing new, merely rehashes the plot of "Simon vs. Simon." Serpent by Michelle Rosenberg presents the preposterous assumption that AJ was a druggie in college, an idea totally out of kilter with everything we know about the character. Postscript by Janet Ellicott is a nice thought, but again very much out of character. This is the one that's nearly offensive — it borders on the line of too much intimacy for two mature brothers. The last, In the Water by Ann Wortham & Laura Virgil is a good little funny, nicely done, with cartoon style illos by Rosenthal that add to the effect. First Case by Christine Jeffords is a long, so-what story. Rick and AJ seem superfluous to the plot. Jeffords likes to footnote her other works, which is a bit presumptuous. She overworks descriptions until it becomes almost funny as you anticipate the next one. They never enter a room without her describing every detail. She hasn't learned to tell the reader only what they need to know. The next longer story is Lest We Forget by S.C. Hall, which we know from the editorial was an ambitious undertaking by the author. It's a well intentioned idea of Rick as a Viet Vet gone crazy, but she hasn't managed to capture his character very well. When doing research on a subject, one must always remember to apply what is learned to the character with whom you are dealing. You cannot portray Rick Simon as the 'typical' VietNam veteran, without considering his individual personality. The ending of this story is rushed, as if she were eager to be finished with it. A Christmas Carol, Circa 1984 by L.A. Carr missed a lot of opportunities. It's an okay little story, but not a blockbuster. Is her spelling really that bad, or is it just the typing? The last of the four major stories is the only one worth the price of the zine. This one was so good, after all the other drek, that it was like a ray of pure sunshine from the Sunshine state. L.A. Adolf is the author of No Retreat, No Surrender. It's also a post-Vietnam story, but this one takes place just after Rick is discharged. It's very in character for both Simons, it uses good psychology, good relationship, good adaptation of the Vet situation. A truly worthwhile read. The artwork is mostly adequate, although there are no half-tones to justify the expense of the zine. We must accept that there just aren't a lot of good artists in the smaller fandoms, and the few are overworked. Artistically, however, JACOJ manages to be a cut above average on a media zine. Overall rating, on a scale of 1-10: 3.5. [1]