Details at 11 is a gen digest-sized Simon and Simon letterzine with at least 16 issues. They each run about 35 pages. The title of the zine comes from the pilot episode of the same name.

Each issue offered a Discussion Topic for the next issue titled, "Recipe for Disaster."

There is some overlap in publication times with Simon and Simon Investigations.

Fans in issue #3 refer to a "mock issue" that came out, which likely refers to a flyer of introduction. This makes sense, as fans seem to be fairly centered about the discussion topic in the first issue.

This letterzine's material is completely G-rated; no talk of sex of any sort, no discussion of violence, and some fans stated being offended by A.J.'s use of the word "bastard" in one episode. Like many fan publications of the time, some issues of the letterzine were published without copyright notices and may, in the US, be in the public domain.

An Unusually Close Relationship with the Show's Production

The editor, and at least one very active fan, spent time on the show's set and had the ear of some of TPTB. It was a relationship that had its pros and cons. 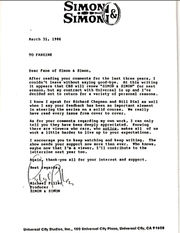 On Feb. 21, Darlene and I visited the Simon offices once again and we had the opportunity to sit and talk with Mike Piller, Reed Morgan, and Tom and Jo Perry. It was a nice informal discussion about the show, and we were able to give our opinions of the season so far. Everyone was very enthusiastic about DEA [Details at 11, this letterzine], and Reed had even requested extra copies of back issues, so he could catch up on the stuff he'd missed.[1]

The editor admits, though, that this closeness to the process, has been disillusioning and has sapped some of her enthusiasm for the show:

I want to put to rest the discussion, privately and in this letterzine, about my so-called dissension to H&Mc. I am not fickle, I have been taping H&Mc since the very first show, along with Riptide, The A-Team, Miami Vice, and Moonlighting. This doesn't mean I don't like Simon. Also, I have been somewhat dissatisfied with Simon since about 3rd season on, this has not been a sudden change. By dissatisfied I mean that have resigned myself to the fact that is it going to be a certain type of show (not exactly the type I had hoped for after 1st season). So, I've restructured my thinking and expectations. Alot of this is because over the years, l've grown closer to the so-called back office. This is not meant to sound like bragging, I chose to become involved with the Simon production offices, no one forced me to. But l've paid the price - the knowledge that real life problems such as networks, executives, ratings, production details and the personalaties of all those involved all dictate what we see on the air. lt's fun to totally immerse oneself in the fantasy world of Rick and A.J., but for me, it's become a luxury I can no longer enjoy. I know that we'll never see the type of episodes we talk about in this letterzine or in fan fiction and because I know that, I view Simon differently than I used to. Once you see behind the camera, it's hard to maintain the fantasy. I chose to see behind the camera, so I'm not asking. for sympathy here, but nothing destroys illusions better than visits to the set and talks with people involved in the show. I know many of you are probably saying,"oh, sure, listen to her complaining, let me have her problem! Well, maybe for some of you, if you want to work in television as I do, it would be a good idea to be in my situation, but for others, it is not. All l'm saying is that because of the events of the last few years, my feelings towards Simon have been altered. I still love the show, I watch it, I tape it, I discuss it, I read fiction and I publish this letterzine. So, please don't keep asking me if I've suddenly moved away from Simon. I've not suddenly moved away, l've iust reset my expectations over the years and learned to look forward to aspects of Simon other the ideal I had hoped for 4 yrs ago.[2]

The actor who portrayed A.J. responded to some questions from some of this letterzine's fans. These responses were printed in issue #13. One fan asked him what he thought of "Details at 11." The actor's answer:

It makes me nervous. how would you feel knowing you were being scrutinized so closely? On the other hand, some very interesting observations come out of it.[3] 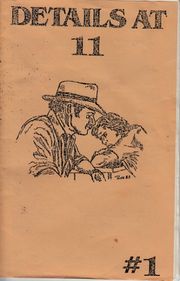 The front cover is by Ruth Kurz. The "Recipe for Disaster" was to name one's favorite episodes, a challenge that was difficult for many fans as some did not own VCRs to re-watch eps, and they did not know the titles of episodes. Several fans mentioned that they got hooked on the show because it came right after Magnum P.I., and they were too lazy to change the channel. One fan introduced her first LoC saying she was apprehensive to write it ("I've held back from letterzines to date because of the hard words and wars so many seem to have."). This issue contains a mini-episode guide, some reprints of a pro-cartoon ("Shoe"). One fan offers to be an on-source advisor in San Diego for fans wanting to know mundane details for fiction like addresses and the cost of tickets to zoos and other such establishments.

Details at 11 2 was published very late; the editor apologizes. The "Recipe for Disaster" is "who is your favorite character and why?" A number of fans write letters complaining about the quality of Magnum P.I.. 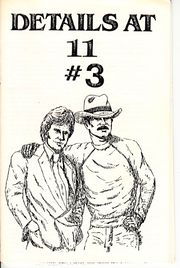 Details at 11 5 is undated and contains 54 pages. There are 18 LoCs. The front cover is by Ann Larimer. Other art by Ann Larimer, Cheryl Newsome, Ruth Kurz, Dar F. 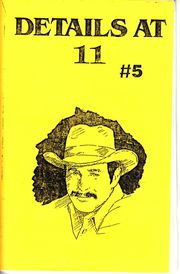 Details at 11 7 is undated (letter deadline for the next issue is December 10, 1984, editor says in this issue that she "hopes" there will be four issues a year from now on) and contains 51 pages. It contains 24 LoCs. 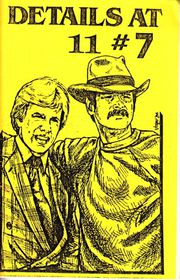 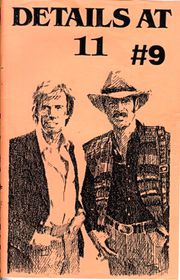 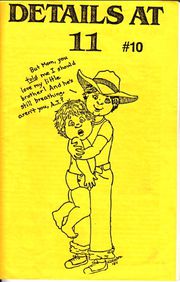 Details at 11 11 is undated but was published in the early fall of 1985 (the submission deadline is January 15, 1986). It contains 38 pages and has letters from 20 subscribers (one of them "from" a Hardcastle and McCormick character). 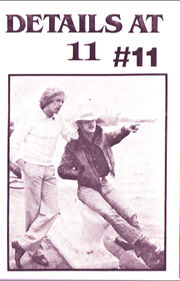 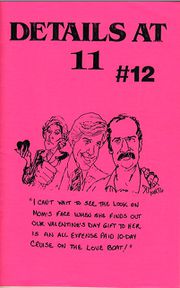 Details at 11 13 was published in 1986 (submission deadline for the next issue was July 1, 1986). It contains letters of comment from 20 people (one fake one) and has a cover by Lizabeth Tucker. There are 30 pages. 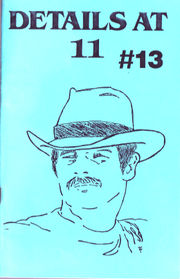 Details at 11 14 contains 21 letters of comment. It is undated (the submission deadline for the next issue is October 1, 1986) and contains 34 pages. 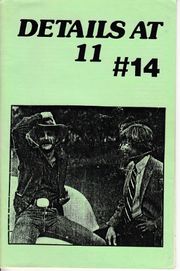 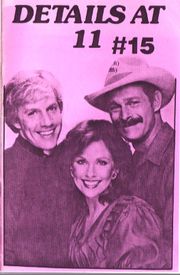 Details at 11 16 was published in 1987. It contained letters from seventeen people. The cover is by Lizabeth Tucker. 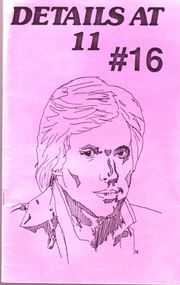