From Fanlore
(Redirected from Finish the Story)
Jump to: navigation, search 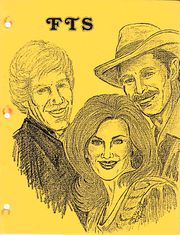 Finish The Story ("FTS" on the cover) is a gen Simon and Simon anthology.

It contains the results of the 1984 Details at Eleven and the Jeannie Wilson Fan Club contest. The front cover is by Melinda Reynolds. It has seventeen pieces of interior art by S.C. Hall, Ann Larimer, Kathy Lachenauer, Gennie Summers, and Mary A. Otten. It was produced with a minimum of editing.

This zine was to debut at MoreEastlyCon and its original price was $11 plus postage.

Three of the stories go with the prompt from the Jeannie Wilson Fan Club Update: "Rick's off on a fishing trip and A.J. has accepted a routine surveillance case. At least he thinks It's routine, until he begins receiving threatening phone calls, and he and Janet are struck down by a hit-and-run driver. What's going on that he doesn't know about?"

Three of the stories go with the prompt from Details at Eleven: "Rick wakes up In a strange hotel room with a bleeding woman In bed beside him and a bloody knife on the floor. How did he get there? Who stabbed his bedmate? He can't remember."

Tou'd think that after all the zines I've put out, writing the Editorial would be duck soup by now.

Well, it's not. Setting masters and doing layout is the easy part. Thinking of something original to say about what I've done is what's tough.

In this case, though, I think we've come up with something different. To my knowledge, no one has done a zine quite like FTS before.

In 1984, two "Finish-This-Story" contests relating to Simon & Simon were run in different letterzines. One, which appeared in DETAILS AT ELEVEN, was based on a situation created by Elaine Batterby, and entries were judged by Elaine and DAE's editor, Cindy Shannon. The other was created by [Darlene F] and ran in her JEANNIE WILSON FAN CLUB UPDATE, but actually had more to do with Rick and A.J. than with Jeannie's character of Janet Fowler.

Originally, Cindy had planned to do a special one-shot zine including all the entries to her contest, but when she found that her schedule wouldn't permit it, I volunteered to take over the job. Then Lisa Adolf, who subscribes to the UPDATE, sent me a Xerox of the contest from that, and since it was so very Simon-related, I wrote Darlene and asked if I could add her entries to the ones for the DAE contest. She said it was fine with her if the writers agreed, so I contacted them, and they did. The result is what you're about to read.

I've arranged the contests chronologically, and within each one the stories are placed according to length, shortest first, longest last. (It's sheer coincidence that my own entry to the DAE competition, "Goodbye, Ms. Chips," happened to be the winner, and that Darlene's "On My Own And Hating It!," which immediately precedes it, would, in my own opinion, have been the winner if I hadn't entered.) The title of the zine, as you've probably guessed by now, is an acronym for what's inside it—FTS, for Finish-This-Story.

Although this is theoretically a one-shot (you never know, in the zine game!), I hope you'll LoC it and mention what you liked (or disliked) about it. If there are no further issues, I'll type up the LoCs, run them off, and circulate them among the contributors, so everyone will have a chance to see what the readership thinks of our strange little gem. So don't be afraid to write. After all, this thing was put together for you.

Thanks go to Cindy, Elaine, and Darlene for originating the contests and furnishing copies of the entries; to Lisa, for alerting me to the existence of the UPDATE competition; to Kathy, Ann, Mary, and Gennie for the art, and especially to Susan for accepting the assignment to illo "Your Brother's Keeper" at practically the last minute when the artist I'd originally approached decided she couldn't squeeze it into her schedule; to Melinda for the spot illo's, one of which became the front cover; of course to Ruth, Lucy, Darlene (again), Regina, and Pamela, whose entries are published here for the first time anywhere; and of course to JP, Mackie, Jeannie, Tim, and Mary for making it probable. And to you, for buying. Enjoy.