You may be looking for Media Rave.

Media Rare is a adult het and gen multifandom anthology. 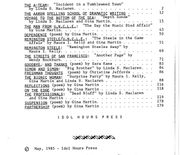 table of contents for issue #1 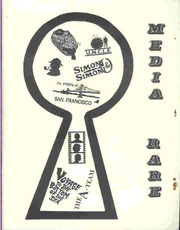 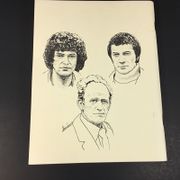 back cover of issue #1, Desire Gonzales 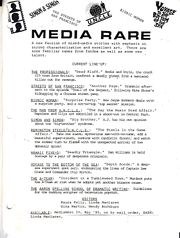 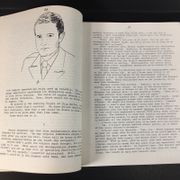 Media Rare 1 was published in May 1985 and contains 180 pages. The art is by Desire Gonzales, Linda Maclaren, Charlene Kirby, and Kathy Hickenbotham.

[zine]: Usually one can tell the contents of a fanzine simply by looking at the title. Other times, there is the merest hint of the contents. Then there are those that promise. "Media Rare" is one zine that does exactly that. Not only do the pages contain the more common media material (UNCLE, Simon and Simon, A-Team), it also brings out some fresh newcomers into the field, such as "Voyage to the Bottom on the Sea" and "Bionic Woman". The zine is the effort of four, that' s right, count 'em, four editors - Maura Kelly, Linda S. Maclaren, Gina Martin and Wendy Rockburn. They also nearly make up the table of contents, both for fiction and art, but that doesn't matter. The end result is a thick, slick, good-looking zine. For all the variety of stories inside, I found it surprising that my favorite one would end up being the "A-Team" tale - INCIDENT IN A TUMBLEWEED by Linda Maclaren. I'm an UNCLE fan, not, and I repeat, not a fan of "A-Team", yet the story came off light, comical and gave a whole new meaning to tumbleweeds. The characters are quickly, but thoroughly described - a boon to someone never seeing the show. The dialogue is light and fast. How close this is the show is beyond me, but it read well. Unfortunately, the technique that worked so well in that story, slowed down the longest and definitely most graphic story in the issue - a "Professionals" called DEAD BLUFF by Linda Maclaren and Gina Martin. This time, the character description gets in the way of the story. There's no room in the action for the pauses and because of them, the story slows in spots. It is violent and not terribly funny, so people should be warned by the "Special thanks" listed to Jane Nauman. It gave me a funny feeling too. The two UNCLE pieces, "THE DAY THE MUSIC DIED AFFAIR" (Gina Martin) and "THE STEELE IN THE GAME AFFAIR-- (Maura Kelly and Gina Martin) are fair. The former is rather heavy and somber - unlike the tone and flair of the show, but the second story does manage to recover some of the humor, while Steele and Solo exchange barbed comments over Laura and Illya puzzles over where he's seen that man before. The STREETS OF SAN FRANCISCO piece (Another Page by Wendy Rockburn) and Voyage to the Bottom of the Sea (Depth Sonde by Linda Maclaren and Gina Martin) and 'hurts in the line of duty' stories - not overly gruesome or hanging on long descriptions of the wounds. Nor do the injuries stop others from the successful completion their duties. As one would expect, both on the television and any trustworthy zine, the rescue is in the nick of time and everyone lives to be renewed for the next season. There is one short "Simon and Simon" piece by Linda Maclaren, for those of you who are fans of that show, along with a poem, by whom I consider to be the best of that fandom, Christine Jeffords (just send me money, Christine). A sprinkling of poetry dedicated to other shows and to partnership makes up the rest of the zine, except... except for "The Aaron Spelling School of Dramatic Writing" I haven't quite figured out whether this is on the level or not, but it may give us all a clue as to the 'quality' viewing we currently have on the tube. There is plenty of art in this issue of "Media Rare", sprinkled liberally throughout the stories. No page is dedicated solely to art, most of the pieces being fillers. The illos for "Dead Bluff" penned bv Desire Gonzales are very good, possibly the best in the zine - definitely the back cover is exceptionally well-done. The rest is acceptable, none is terribly distracting or poorly done - possibly a zine first. "Media Rare" is a welcomed addition to the growing market of media zines - some­ thing we've needed for a long time. As to whether or not I'd recommend it, I won't say! But issue #2 can't come soon enough to suit me. On a scale of 1 to 10, I give "Media Rare" an extremely favorable 7. Give it a try - you won't be disappointed. [1] 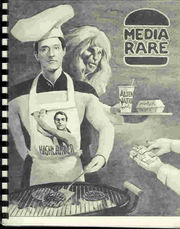 cover of issue #2, see some comments below

i never want this explained[2]

Looks like a mid 1980s fic fanzine with focus on ST:TNG, Beauty and the Beast, Alien Nation and Highlander; comb bound so someone spent real money on getting this printed at their local copy shop or Kinko’s.

Kids, this is what people did before the Internet: published their fanfic and fanart and sold it in anthologies.[3]

My childhood wrapped up in one picture. [4]

let me see… Al from Quantum Leap, using zigi to analyze Data from Star Trek: The next Generation, wearing an apron featuring… Image is kind of distorted, it’s either Christopher Lambert or Sean Connery from Highlander, whilst preparing burgers for Ron Pearlman as The Beast in some Beauty and the Beast miniseries that I vaugely recall from my youth, who is already walking off with a tray of food products advertising Alien Nation (a science fiction film and afterward television series!).

P.S.- as i ponder the Alien Nation fast food presence… I can’t help but suspect those burgers are beaver.. (them aliens ate some weird shit buy our standards; they’d get wasted on sour/spoiled milk, too) [6]

A multimedia zine including, besides B&B, Quantum Leap, Alien Nation, STNG, Blake's 7, Highlander, and Teenage Mutant Ninja Turtles (a crossover with B&B!). Of the B&B portions, Toni Lichtenstein Bogolub's “A Spirit too Delicate” is a sequel to her “A Cry of Players,” published in The Chronicler's Tale; in this story, gifted young actress “Madame Sarah” (Miranda) is leading Mouse into dire risks, Above; she's also being drawn back to her monstrously abusive father, whom she fled in the earlier story. At last formally Silenced for her rashness, she finds she can no longer call up the characters she's formerly used to give her a sense of self, and vanishes Above. The hunt is on! V/C are strong background presences in this story. In Cicatrice duVeritas' “Kitty's Tale,” young Devin and younger V intervene when Kitty (Catherine) Genovese is attacked in full view of her indifferent neighbors. This time, the story has a happy ending. There's a Lynn Wexler poem, “Together,” and an anecdote of C dreaming herself into Alice in Wonderland, more or less. Finally, V, reacting to C's fear, goes racing through the tunnels...and finds himself the guest of Splinter and the Teenage Mutant Ninja Turtles in Mary Benninghoff's “Beneath the Surface.” Barbara Klapperich's “Timeless” briefly recounts the effect of Kristopher Gentian's V/C portrait, now hanging in the Great Hall, down through future time. Other authors include Debbie Ristick and Jackie Paciello. Jim Wappel's many pieces of B&B artwork are very handsome. Also art by Henry Parrilli, Mary Prince. This is the bunch who made the superlative (and now out of print) Rich in Hope such a delight. If you enjoy other fandoms too, this excellently done zine will be even more rewarding. [7] 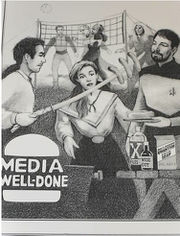 Media Rare 3 is titled "Media Well-Done." It is adult het, contains 200 pages and was published in May 1995. It was edited by Phyllis Ayesse, Patricia Reed, and Lynne Wexler. Layout was by Toni Lichtenstein Bologub, Jackie Paciello & James Wappel. Cover art is by James Wappel; interior art is by C.H. Barnett, Lisa Mason, Mary Prince, Henry Smith, and James Wappel.