You may be looking for Scenario, a Greatest American Hero letterzine.

Scenario is a gen zine. It lasted for two issues, and a third was planned but never published (the content of which is described below).

About the Zine's Beginnings

Admittedly, my first 1-1/2 years of fanzine publishing saw me; dangerously close to overextending myself—attempting to put out three regular letterzines and a fiction zine (Scenario), as well as occasional special projects. After trimming my output to just The Cannell Files and Scenario, I think that the proverbial 'bloody nose' I got from trying to do too much taught me a valuable lesson...in order to produce a fanzine (especially a letterzine) that people will want to read on a regular basis, an editor needs to concentrate more of their time to emphasizing quality as opposed to quantity. My attitude towards my series of Scenario zines will remain one of frugality (i.e. my intent is to provide as much material in as few pages as possible—cutting back on any unnecessary costs and leaving a frill-less zine), but I intend to continue experimenting with ways to improve the look and readability of The Cannell Files. I thank those of you who've stuck with the zine through the cancellation of several of Cannell's shows, and I hope that those of you interested in the current and future offerings from that studio will look on TCF as your continuing forum for discussing such shows. [1] 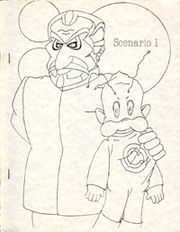 cover of Scenario 1, from an ad in Pop Stand Express #10, "The zine with the cover that boggles everyone's mind! The zine they said couldn't be done! (or was that shouldn't?) The zine proud to contain a picture of a stuffed toy!"

The Return of Scenario 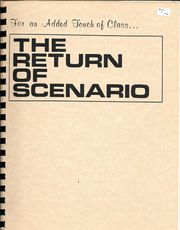