Some Facts About the 2002 Convention 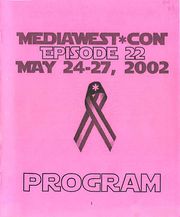 cover of the 2002 Program Guide

Saturday night presentations included the musical Potter! by Mark and Marcy Kobrak and Bev Grant. There was also a MST3K style presentation of Smallville in the Fannish Video Room.

Another skit was "Hobbit Whore and Companion."

From the post-con report:

FAN FUND: Maryann Walther Keisel was the winner of the 2002 SF/Media Fan Fund. She attended MW*C 22. It was the second time she won the Fan Fund. Thank you to everyone who donated items to the Fan Fund auction this year (many of their names were listed in PR 3) and to everyone who bid/bought items. And thanks to Joyce Muskat who sent in over 40 varied and very nice items by mail, and Janet Mc Lauchlan who sent over 60 'zines. Thanks also to the GoFers who helped me get all the bid sheets done on the Friday. It kept 3 of us busy. Due to everyone's generosity the Fan Fund had it's biggest auction/sale ever. Almost 300 items were donated, but because of lack of space and time, 165 items were put into the auction with 88 of them selling. The rest, all 'zines, were with their donor's permission put either in the permanent loan collection of the Fanzine Reading Room or donated to the Fannish Archives. There was also a box of 'zines put out on Monday morning at the 'Zine Room at &1 each. During the con, more donated items came in which will be held over to next year. There's already some interesting stuff.

MediaWest*Con was a con that touted its lack of guests of honor. However, the 2002 con had two special attendees.

Thanks also to the Crossed Swords, Chris Demetral, and Mark Allan Shepherd for coming to MW*C22.

Chris Demetral will be known to most attendees as Jules Verne on the syndicated SF/fantasy series The Secret Adventures of Jules Verne, which also stars Michael Praed, Michel Courtemanche, and Francesa Hunt. He's appeared recently on CSI, has done voice work for Batman Beyond, will be familiar to Lois & Clark fans for his multiple appearances as 'Jack' and to ST:TNG fans for his role as 'Jean Luc Riker' from the 'Future Imperfect.' Chris will attend the SAJV panels and an informal tea/lunch party in the Party Suite to give him a chance to meet and hang out with fans of the series.

Mark Allen Shepherd played Morn, a humanoid alien of mysterious origin that frequents the space station at Deep Space Nine and found to be quite the regular at Quark's bar. Morn might just be the most famous non speaking role in Star Trek history. An accomplished artist, Mark has numerous works of his abstract impressionist paintings, mixed media and photomosaics used on the sets of Star Trek: Deep Space Nine as well as other television, films and commercials. Plural Dolt, an absurd music theater group Mark performs with now in its fifteenth year has just finished its latest recording "HunTonFunOnc." It'slike Frank Zappa meets Spike Jones on Forbidden Planet. Cartoony, Wild and Zainey. Plural Dolt plays in and around the Los Angeles area and plans on going on tour soon.

A diverse background in science as well as the fine arts, Mark has a Bachelor of Science degree from Roger Williams College and for four Years at California Institute of tlie arts studied Music, Film, Theater, Performance and interdisciplinary arts. Much of Mark's work explores such abstract concepts as energy, consciousness, perception, multi-dimensionality, the transformation and mythologization of the environment through a variety of media.

From the post-con report:

FANZINE READING ROOM: MW*C 22 was the 20th anniversary of the Fanzine Reading Room and looked like it was going to be the last year for it. This was due to virtually no response, yay or nay, to the question published in PR2 as to whether or not the con membership wanted it to continue. There were also no loans of'zines and very few readers. However, after several conversations with members and 'zine dealers/publishers at the con, most of whom said that they didn't know of the Room's existence or the array of stuff/services it offered, I'm going to give it one more try. So. the permanent loan collection has been revamped again and there are commitments from 10 (so far) "zine dealers to lend 'zines including their newest ones to the 'Zine Room for MW*C 23. I'll be talking to more 'zine dealers about loans before next con. But, you don't have to be a 'zine/publisher to loan 'zines. Do you have a favourite "zine. old or new, that you'd like to share with the con at large? Then, please bring it (or send it) to the con. Check future PRs for info. — Jan Gosnell

A complete list of winners, with photos can be seen here.[2]

A complete list of winners, with photos can be seen here.[3] A few sample doors are included below.

example of LOTR cross-stitch art by Sapphire sold at the 2002 MediaWest*Con art show. The artist writes: "This Aragorn is from the Fellowship. He was my first LotR design and version B, together with his brother picture, Boromir, sold very nicely at MediaWest Con 22. In this version (A) I'm not happy at all about the hair. And, yes, I know, he has gray eyes. I didn't know better back then ..."

The convention lost the list of winning vids. From the post-con report: "The Fannish Video Competition winners list may have been lost to a computer virus. If the data is recovered, we will post the winners on the MW*C website."

However, approximately 90 gen and slash vids from over 16 vidders were submitted. For a complete list of submissions go here. -

Thank you all for your time and effort, especially to those who work notjust during this weekend, but throughout the year!

Thanks to Columbia Games Inc. (http://www.columbiagames.com) and Galaxy DVD (http://civdrentals.atfantasy.com) for donating items for prizes, and to Jeff Walker for studio freebies and movie trailers!

[This page needs some.]