Some Facts About the 1988 Convention 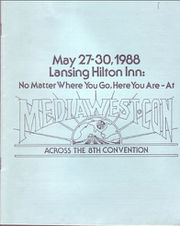 cover of the 1988 program book

While door decoration awards officially began in 1990, 1988 was probably the first year a handful of doors were decorated. A TARDIS door, with part of the Fourth Doctor's scarf peeking out from under the threshold was one of that handful.

Music Videos: Descriptions & Running Times: (these will be scheduled apart from the regular videos" see posting at Waverly).