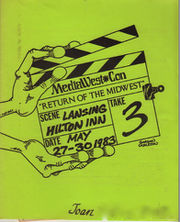 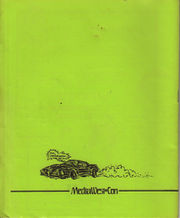 Some Facts About the 1983 Convention

We are looking for any info on the pre-1998 vid show winners. Also information as to when the first fan vids were shown at MediaWest*Con and when the first Video Show was held.

Some panels: "Women's Roles in SF/Media -- in Print and Screen," "Morality in Fandom," "SF Literature -- Also a Medium," "SW Fan Universes," FIAWOL/AWAL: Once a Fan Always a Fan?", "Neo Orientation," "Fen Vs. Fans: the Important Difference," Japanimation," The Empire and Imperial Point of View," "The Perfect Man for a Fannish Woman," "Real Fen Don't Eat Quiche -- The Rebuttal," "Going Pro in Medialand," and "Zine Publishing."

MediaWest 3 was the first con I went to, and I was surprised at the lopsided ratio of women to men. It's less so at non-media cons, of course; in fact, I've been to some where there are more men than women (list available on request ...but you might want to think twice about it!). [2]

To those who missed MediaWest Con: It was at once educational, enjoyable, zany, profound, and even edifying. The camaraderie was infectious; the good humor unmatched by any I'd ever experienced. The panels, in particular, were fine examples of shared opinion without hurting anyone's feelings. I learned that ethics and morality in fandom are important elements; that the novelizations of the SW Saga are only supplements to the film (the final authority) and not necessarily written in granite. I have found mediafen to be open, warm, intelligent, creative and great fun. The costume competition and art auction were revelations of creativity and imagination mixed with fun and laughter. We attended ROTJ en masse—about 500 of us. Even though the film was delayed due to mechanical problems and we didn't return to the hotel until 3 a.m., no one complained. When the panel gathered the next day to share comments and/or brickbats, most (about 90%) agreed that the film was a joy and quite satisfying. The Ewok Chorus was charming, enchanting and delightful. Like the film, the chorus members shared a true "Celebration of Love." I never expected to enjoy myself at a Con as much as I did. I made new friends, took lots of photos and was inspired to write my first story for a zine. [3]