Morn is a character on Star Trek: DS9. He has no dialogue, but in one episode, laughs. 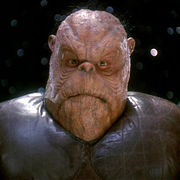 He has his own fan club, called Morn Watchers.

Some Brief Canon Facts About Morn

One fan comments: "I thought I was the only one who paid attention to this guy and was delighted that he's even gotten a fan club! And he's never even spoken one line! I love Morn! (I'm sure everyone knows by now that he's based on Norm from Cheers, right? I've always wanted to see a scene where Morn enters Quark's bar and everyone shouts, Morn!") He's this poor, hapless, mush-faced alien who always looks like he needs a friend and never gets a chance to speak." [2]

Another one writes: "Who would have thought there would be so much support for an actor whose face we never see, who has never uttered a word, and appears to have no personality whatsoever -- and yet when Morn doesn't appear, there are letters of complaint to Paramount." [3]

Nana Visitor, who portrays Kira: "He goes to conventions and has a real following, just from being the guy who never talked and sat in the bar all day." [4]