Olivia Dunham is one of the primary characters on the television series Fringe. She is an FBI agent assigned to the "Fringe Division," a multi-agency task force under the U.S. Department of Homeland Security.

Special Agent Olivia Dunham is the show's protagonist. She is reserved, focused, driven. She would make Batman proud with her detection skillz. She doesn't stop asking questions and she never takes no for an answer. She is a hopeless workaholic. She wears geeky glasses and sensible underwear. Sometimes she has trouble sleeping. She's always hardest on herself. She is a crack shot. She beats up people on a regular basis and is very adept at rescuing other people AND herself. She loves to spoil her adorable niece, takes her to amusement parks and makes her pancakes. She doesn't like to tell people when she's scared or feeling vulnerable. She will protect everyone. The weight of the world is on her shoulders. She keeps going, going through sheer willpower alone. She seldom breaks. [1] 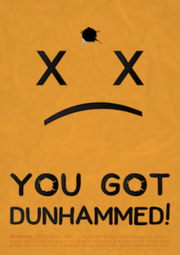 Another fan continues in the theme of Olivia is Awesome:

There are many reasons to love Olivia Dunham: her sensible shoes, her ability to count cards, her geeky nerdiness as evidenced by her nighttime reading and knowledge of both versions of Invasion of the Body Snatchers. However, what really impresses me the most is her general ability to keep her shit together and her priorities in order despite the insanity that is her life. This is a woman who will drink pureed flatworms sans fruit flavoring if it means getting results. She gets shit done. No matter how many times her world gets flipped upside down, Olivia always seems to adapt and push forward through sheer determination and grit. The fact that she does it even though it's hard and it scares the crap out of her is just another reason why Olivia Dunham Is Better Than You. [2]

Some fans of the show find Olivia difficult to relate to:

[I]f you've done any kind of reading about Fringe online, especially back toward the beginning of the first season, you've definitely come across viewers who don't like Olivia, or don't know what to make of her, or find her cold and wooden, or whatever. Less so now, because obviously anybody who has kept watching the show through both seasons must realize how amazing she is (or else, uh, why are they still watching?), but it is a common reaction for people just starting to watch. [3]

Most fans, however, agree that Olivia is pure awesome. As fan Rana Eros said: "I love how much fandom loves Olivia Dunham." [4]

Fringe's mytharc involves a parallel world at war with our own. The Olivia Dunham of this alternate universe is often referred to by fans as Alt!Livia, Bolivia, and Fauxlivia.

Olivia and Alt!Livia are unique characters, although many fans are as fascinated with Alt!Livia as they are with the original.

I love how Red Olivia's stride is even more mannish than Green Olivia's, her body language even more aggressive male loner hero. I like Green Olivia's hair better, though. I do not like the bangs. I love how Red Olivia does brusque and aggressive as her default and gentle as her interrogation facade, the inverse of Green Olivia; I suspect we will see how much more alike they are than they appear. I love that Olivia is an investigator and a cop in any universe; I have always suspected that the "soldier/protect" indoctrination of the cortexiphan trials was filtered through the individual children's attitudes and aptitudes, even before "Olivia. In the Lab. With the Revolver." confirmed it [...]. [5]

The most common ship in the Fringe fandom is Olivia/Peter Bishop. There are also fanworks that deal with her canon relationship with fellow agent John Scott. Olivia/Charlie Francis has a small fanbase. The femslash pairing of Olivia/Astrid is popular with f/f fans of the series. Olivia/Alt!Livia is another femslash pairing.