A no-guest media convention held in Newark, NJ. It is intended to replace Eclecticon which ended in 2006. it ran for two years and then went on hiatus in 2009.

It was sponsored by Light & Shadow Press.

"Sponsored by Light & Shadow Press, EMC1 was conceived to fill the gap left by the departure of ECLECTICON. Our goal is to serve the needs of both gen and slash media fans. The con atmosphere will be tolerant, inclusive, and open-minded. Come join us for three days and nights of face-to-face fandom in an affordable but luxurious setting."[1]

The Albie awards are EMC’s way of encouraging participation and celebrating our fellow fans. The Albies are intended to acknowledge all the wonderful fannish contributions that made EMC a success".

The Albie process took place during the convention weekend. Fans carried their ballots around during the convention, jotting down nominations for the different categories as they came across people and activities deserving of recognition. There are many categories, but all of them are rooted in appreciation of fans and fannish efforts, such as the Best Moderated Panel I Attended and Fellow Con Member Who was the Most Helpful or Friendly to Me.

The Albies helped make our friendly convention just a little more special for everyone. [2] 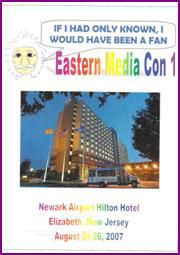 flyer for the first one

From the 2007 vid show coordinator, Flamingo:

"Eastern Media Con's first ever vid show has been a huge success. We can only thank all the generous vidders who allowed us to use their wonderful vids: AJ Johnson, Laila, Ankaree, Chat Noir, Diana Williams, Enednoviel, GF & Morgan Dawn, Gianduja Kiss, Happyme, Jackie K, Spirit Guide Productions, Killa & Laura & T. Jonesy, KimberlyFDR, Laura McEwan, P.R.Zed, Tiranog, Sammy, and some classic tape vids by Sockii. We couldn't have done it without you.

We had a nearly equal balance of gen and slash vids that represented many diverse fandoms, including a brand new one to the audience, the German show Inspector Rex. We also provided a handout with information about who created the vid, the vid title, song title, song artist, and contact and web site information for the vidder.

We are hoping to make fan vids a significant events of this con as it grows, and if our 3 hour vid show was a glimpse into the future, we're off to a great start. The main vid show was the primary Friday night event. We also showed a 35 minute "best of" vid replay on Saturday night, and after all other evening events were finished on Saturday, we played vids by request until 2:30 in the morning. While none of the vids were technically "premiering" vids, they were new to most of the people in the audience.

"The 2007 EMC con, while to many was seen as a replacement to Eclecticon, quickly took on its own unique personality. Attendees found the atmosphere more equally friendly to slash and gen fans, whereas Eclecticon had fallen out of favor with some slash fans as they felt the atmosphere there had become more (marginally) "tolerant" of slash than actually accepting of it. A heavy panel track representing a wide range of fandoms was incorporated, again similar to Eclecticon, but the convention also featured an art show, evening entertainment, a vid show, and morning social activities. The atmosphere of the convention was similar to previous small, fan-fiction/fanzine oriented conventions of the Mid-East region of the past such as ConneXions and SHarecon. The gender makeup of the convention attendees was predominantly female."[5]

"EMC1 got off to a rousing start last month as a new East Coast fan-run convention, attempting to fill the absence of the defunct Eclecticon. It was held on August 24-26 in Newark, New Jersey. Their overall theme was to represent a university with the concom calling themselves department heads. Co-conchairs were Glow, Kath Moonshine and Tiger Tyger, with excellent assistance from Cyanne, Lorraine Brevig, Flamingo, Lois, Lorraine G, Merlyn and Sonia. Glow, Kath and Sonia attended Revelcon year before last and I like to think they used us as a model for what they thought worked in running a con.

Friday and Saturday morning started with a free breakfast buffet of rolls, muffins and pastries, with coffee and tea. While everyone ate, there were games designed to get everyone to mix and mingle, meeting new people along the way.

The rest of the daily programming contained the usual panels, dealer's room and art show. The dealer's room and art show were small but that was to be expected in a new con and they attracted some well known and loved dealers and artists. The panels had everyone seated in a circle instead of the usual head table and audience arrangement. I really enjoyed the panels I attended and the roundtable discussion kept things moving.

Friday evening was the vid show and it was every bit as good as Revelcon's. Flamingo showed a variety of vids, gen first then slash. I entered 3 of mine and they were very well received. A "fan favorite" showing of about 10 of the entries was re-run on Saturday and my vid "Unwell" was one of the favs. Flamingo emailed me after the con that she had showed vids until 2:30am that night and all 3 of mine were requested frequently so you know I'm all puffed up over that news. Saturday night was the "Spectacular Spectacular", their cabaret. Quite a few brave souls showed their talents, including your's truly resurrecting my old persona, Tex McLeod, the immortal cowboy who recites cowboy poetry. Ol' Tex got a lot of laughs. The highlight though was Kath and Sonia popping up in various guises throughout the cabaret, including the hat from Harry Potter. The hat was impatient to get finished as he had a hot date with a Raspberry beret. They brought some "little girls" from the audience to sit under the hat in order to get themselves sorted. One was sent to the house of slash, one to the house of hurt/comfort and one to the house of het. It was interesting how the same bits of Kath and Sonia's costumes kept showing up on different parts of their bodies as they changed to Conan the Barbarian, and Gandalf the Wizard.

Sonia ran the hospitality suite, which was a very plush room like we used to have at Revelcon, but this room was leagues better in comfort and style. Sonia kept the room stocked with all manner of munchies and drinks, with pizza delivered at lunchtime on Friday and Saturday, though I would have liked to have seen some veggies and fruit among the chips, cookies and other high fat fare. She promised a better variety next year.

All told, I had a great time at EMC1 and hope to make it an annual trip. Kath and Glow talked to me a bit about making EMC and Revelcon sister cons, helping to promote each other. I like that idea. We need to support smaller, fan-run, inperson cons as so many are closing down."[6] 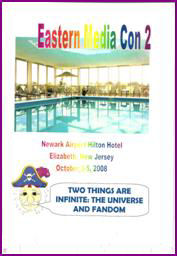 flyer for the second one

No information was posted about the 2008 vid show. However, the 2008 Albie Awards offer a peek into some of the entries: 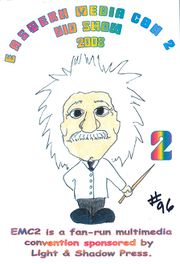 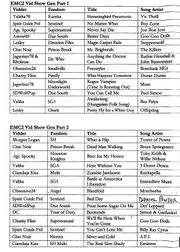 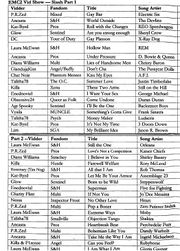