From Fanlore
(Redirected from Filksongs)
Jump to: navigation, search

cover of a filk zine, a collection of topical songs and filksongs especially compiled for Constellation, the 41st Annual World Science Fiction Convention by John Brunner

Filk is a musical culture, genre, and community tied to science fiction/fantasy fandom. The genre has been active since the early 1950s, and played primarily since the mid-1970s. An early mention of filk songs can be seen in the zine Day Star.

It's commonly described casually as "science-fiction folk music" -- and in fact, the word "filk" comes from a typo for "folk" in a 1950s essay[1] -- but that falls short of the full range of music that's considered filk. The exact definition is controversial; like the definition of "fanfiction," fans do not agree on the boundaries of the genre.[2]

It has been defined as the folk music of the science fiction community, and to a lesser extent, of fans in general. The Interfilk website has a good set of links to a variety of definitions.

Some definitions focus on the location of the activity ("filk is what happens in a filk circle"), and some focus on the content of the lyrics ("Filk includes songs about every science fiction or fantasy subject you could imagine: outer space (both real and fictional), books, movies, TV shows, dragons, magic, unicorns, vampires, and aliens of every sort. It also includes songs about things of interest to the Science Fiction and Fantasy community (usually referred to as 'fandom') and strongly resembles contemporary folk music"[3]).

Gary McGath has offered the following definition: "filk music is a musical movement among fans of science fiction and fantasy fandom and closely related activities, emphasizing content which is related to the genre or its fans, and promoting broad participation. Filkers are people who participate in this movement."[4]

I... become a great fan of Julia Ecklar and collected two more cassettes, "Genesis" and "Divine Intervention." Some of the songs on Genesis are "The Escape" (inspired by the movie Escape From New York), "Daddy’s Little Girl" (from the Steven King novel Firestarter), and "For the Need of One" (Star Trek II: The Wrath of Khan). The tape Divine Intervention includes a beautiful song inspired by the film Ladyhawke and "Crane Dance," from the movie, The Karate Kid.

These two filk tapes illustrate the progression of filking. Genesis is the more traditional filk cassette; it was recorded on inexpensive, portable audio equipment with only guitars, drums, tambourines, and spoons as musical accompaniment. Divine Intervention, however, was recorded in a studio with full instrumentation provided by fifteen musicians. [5]

Filk seems to have fallen out of fashion in the 21th century. Fan songs are now commonly posted online, with the folk music style also fading.

Filk songs were often printed in print zines which contained many other forms of fanworks, such as fiction, art, articles, and poetry. It can be difficult to identify a filk if it is not labeled as such, or is not accompanied by the phrase to the tune of, along with the song being utilized. Filks could easily be mistaken for poetry without these markers.

Filks are also performed by single fans, or groups of fans, as a presentation. Many con reports have descriptions of being in the presence of fans who filked for the entertainment of others.

Filks are also performed as a group activity at cons and other fan gatherings.

Some fans prefer to listen to filks as a sound recording. 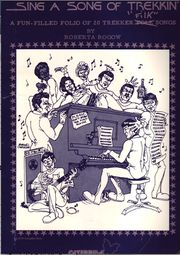 front cover of Sing a Song of Trekkin', with the word "folk" crossed out and replaced with "filk"

Filk music is often characterized by
Science-fiction- or fantasy-themed lyrics,
Acoustic instruments, most commonly guitar,
Creativity being as respected as musical talent,
Community-participatory gatherings rather than concerts. (Concerts do exist, but are less common and less emphasized than informal, social filksings.)

Tunes can be
Traditional folk tunes with new sci-fi or high-tech words,
Popular tunes with re-written lyrics of fannish topics,
Poems or passages from written work set to music,
Original tunes with lyrics addressing some aspect of fandom.

In some cases, a traditional or popular song is "adopted" by a filk community as a popular song at filksings, regardless of origin or authorial intent. These are generally referred to as "found filk" and examples include Weird Al Yankovic's "Yoda," Nigel Russell's "White Collar Holler," and the children's song "The Cat Came Back" (although for the latter, additional verses involving nuclear war or alien invasion are common). 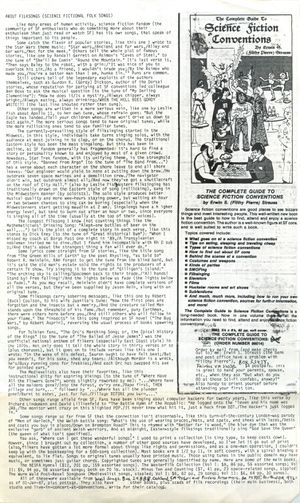 "Like many areas of human activity, science fiction fandom (the community of SF enthusiasts who do something more about their

enthusiasm than just read or watch SF) has its own songs, that speak of things important to its people. Some catch the flavor of popular stories, like this one I wrote to the Star Wars theme music: "Star wars,/Ancient and far wars,/Alley and bar wars,/Not for the meek."

Others tell the whole plot of famous stories, like one by Randall Garrett on Asimov's "Caves of Steel," to the tune of "She'll Be Comin' 'Round the Mountain." It's last verse is, "Then says Baley to the robot, with a grin:/'It was nice of you to overlook his sin./As a friend, I wouldn't trade you;/By the Asimov who made you,/You're a better man than I am, hunka tin.'" Puns are common.

Still others tell of the legendary exploits of the authors themselves, such as Gordon R. (Gordy) Dickson, author of the Dorsai stories, whose reputation for partyinq at SF conventions led colleague Ben Bova to ask the musical question (to the tune of "My Darling Clementine"): "How he does it/Is a myst'ry,/Always chipper, always bright;/Always eating, always drinking;/WHEN THE HELL DOES GORDY WRITE!?! (the last line shouted rather than sung).

Other songs are written in a more serious vein, like one by Leslie Fish about Apollo 11, to her own tune, whose refrain goes: "But the Eagle has landed./Tell your children when./Time won't drive us down to dust again." The more serious songs tend to have original tunes, while the more rollicking ones tend to use familiar tunes.

The currently-prevailing style of filksinging started in the Midwest. In this style, individuals take turns singing solos, with the audience at most joining in to clap, or on the chorus. The traditional Eastern style has been the mass singalong. But this has been in decline, as SF fandom generally has fragmented: it's hard to find a story or personality known to and enjoyed by most of a given crowd. Nowadays, Star Trek fandom, with its unifying theme, is the stronghold

Filk takes place primarily at conventions, although house filks are also common. Filking overlaps with both SFF and media fandom, and is often included as part of those conventions. At conventions, filk usually occurs in the evening hours after regular convention programming has concluded, although many conventions will also offer filk panels, and conventions with a significant filk presence (such as FenCon) may also offer concerts.

Filking also has its own conventions and an annual awards ceremony (the Pegasus Awards), which are part of the Ohio Valley Filk Fest). Other major filk conventions include GAFilk, FilKONtario, and ConChord.

The filk community in Britain, while active for many years before in corners and stairwells, emerged blinking into the light after Follycon, the 1988 Eastercon, when Gytha North and a few other enthusiasts laid the foundations for what would, the following year, become the regular annual British Filk Convention. Peripatetic for its first decade or so, this has in recent years settled, first in Grantham in Lincolnshire, and then in Marks Tey, near Colchester in Essex. The Sams, awards presented at the convention and named after the filking anthem "Sam's Song," are justly coveted. Filk culture in Europe is strongest in Germany, where the FilkContinental convention has been held for many years in a number of impressive venues, including castles.

Filk is often grouped into categories in filkbooks. This list includes at least one example of each category.

Julia Ecklar is another famous fan and filker who recorded numerous filk albums in the early 1980s, including Minus Ten and Counting, Horse-Tamer's Daughter, and Genesis. Many of her songs were used for songvids in the '80s and '90s, especially by Caren Parnes and Mary Van Deusen.

The NESFA (New England Science Fiction Association) Hymnal, first published in 1976, had over 150 songs about various aspects of fandom, including 17 songs about Tolkien's works and seven about Star Trek.

Well-known and popular filksongs include:

Filk collections on tape or CD 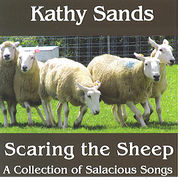 the CD, Scaring the Sheep 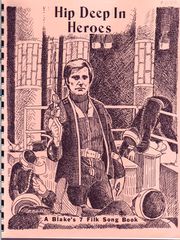 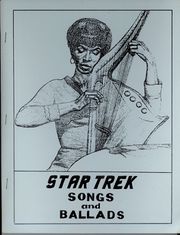