The editor's original plan was to have published one issue per season of Star Trek: The Next Generation. The zine title was from the first naming of Data's planet of origin in David Gerrold's novelization of Encounter at Farpoint. The TV episode Datalore gave the planet its canonical name, Omicron Theta. 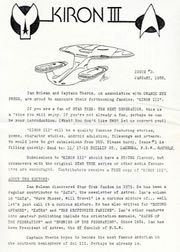 flyer for the first issue 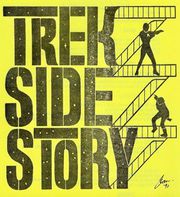 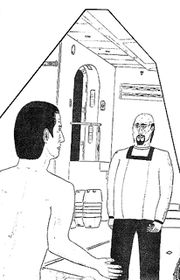 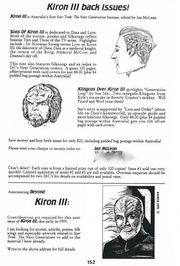 This zine has a special issue called Androidz.

Sons of Kiron III was published in October 1991.

As with the first issue, much of the art was excellent. In Sons of Kiron III, I was particularly impressed with Diana Sheridan's wonderful Andorian picture on page 15. In Klingons Over Kiron III, Glenn Ford's picture of Worf on page 4 and Karen Irving's Troi stood out.

Finally, we got the resolution of The Steep and Thorny Way. Yay! Well done, sir, I say. [1]

I'm writing you a fan letter about the latest Kirons III. Ian, you are such a scream. I finished them on the train home and all through the ride I kept punching the passenger next to me (who fortunately was related to me by marriage) and saying "Read this! Read this!". Special highlights were the filksongs and the limerick parody, The Naked Never. The conclusion to The Steep and Thorny Way was touching without being melancholy - a balance some writers whose work appears on television would do well to emulate. (Bitter about getting my TNG script rejected? Oh no, not me...)

And, of course, the artwork is always some of the best anywhere. I especially liked the first illustration in Sue Isle's Generation Leap. The story itself was a piece of fiction that would be a credit to any publication. I do notice a certain theme of alien sexuality throughout Kiron III; I'll remember to read my next issue under a cold shower.

As always, Ian, you are a terrific editor - for pacing, for variety and tone, for always maintaining quality. You are the best. If I write any more I'll swell your head, so I'll just say thank you for these terrific zines. How much are subscriptions to Kiron III, anyway?[2]

Klingons Over Kiron III was published in 1991.

The poem Lore and Order has been reprinted online on Ian's blog.

I am so sorry for not getting back to you sooner re the Kiron III zines! I enjoyed them very much. I was thinking about grovelling for not responding, but a Klingon grovel isn't a pretty sight

As you know, I much prefer reading fiction of some length to little vignettes and/or spoofs. I'm not fond of Round Robins as they tend to amuse the people who wrote them but to be more in-jokes than good stories. No offence meant. I enjoyed all the stories in Sons. The section about the comics didn't mean much since I don't read them.

Hmm, leafing through: at least three poems (two long ones) seem to be about Data. Why is everyone so fascinated with Data? I like the character, but not that much. Guess people could say the same about Klingons...

It was kind of embarrassing, taking over so much of Klingons over Kiron III, so I hardly know what to say about the zine in general. Both zines were beautifully done, Ian - covers, printing, all that excellent artwork - so much so that I can't single out any one person for praise in that regard, apart from yourself, of course! To do all this for no more reward than love of the product!

The overview of the Klingon stories in TNG was good; I'd like to see another, bringing us up to date with what has been done beyond the time of the zine, since my viewing of TNG is scatty at best and I'm not seeing them in order. I also enjoyed the article about Susan Sackett's visit. First ever slide show I've "been to" without the slides - and it worked! I liked that bit (in Season Two Gossip) about Whoopi Goldberg using all seven words which may not be used in front of minors on a film set! I don't care what anyone says - I LIKE WESLEY. You have my permission to print that, Ian. Anyone who wishes to discuss this with the Klingon Garrison Commander of Perth may step this way! So Whoopi and Wheaton's scenes are some of my favourites, especially when Riker and Guinan were supposedly "instructing" Wesley (hell, nearly wrote Weasely!) on how to pick up girls.

The look of my story, and your help with getting the small details right (I did appreciate your phoning me up to discuss this) are great. Please pass on my thanks to the artists - Paul Beck, Maria Letters, Andrew McGee and Karen Irving - for contributing the drawings that accompanied my story. Muchas gracias to Leonie Cox for the typing. Having suffered from other people's typing in the past, I appreciate finding someone who does a good job!

So I guess my story Generation Leap takes its place with all the other "alternative history' fan productions. In my defence, Your Honour, I do state that the story was written before the movie came out. Maybe a small line to this effect in your next editorial? Or don't you think it matters?

(ED: I know exactly what you mean, Sue. Of course, the purists would say that all fan stories are "alternative history", although, personally, I prefer writing and/or reading fan stories that extend, parallel or at least harmonise with "approved Star Trek canon". It's frustrating when I'm contradicted by a later canonical event (e.g. the real name of Data's home planet - and the title of my zine series.'). I actually feel that your story still complements what was revealed by the movie and, most especially, in TNG's The Emissary and JM Dillard's ST VI novelisation. The explosion of Spacestation K-7 and the activities of Empire's Ring would have become entwined with the numerous Klingon raids on Federation colonies. And the overall result of all this was: the state of peace (or is that truce ?) that we see in your story and episodes or TNG.)[3]

My apologies for not responding sooner. As an ex-zine editor, I know what it's like to receive little or no feedback. Unfortunately, It's been my experience that people rarely give much feedback on zines; frustrating, but that's the way it seems to go.

I thought the zines were good. The story I enjoyed the most was Sue Isle's Generation Leap and I thought Trek Side Story was a really cute idea. (I wish I'd thought of it!) The artwork ranged from mediocre to very good. The layout on the whole was clear and neat, although some sections I found a little too cluttered perhaps. This might be alleviated by more 'internal organisation'. (What does that mean?, you ask - so did I when I was told the same thing about The Captain's Log.) My interpretation of it was better use of the distribution of material within the zine.

Overall, I found Klingons Over Kiron III more enjoyable than Sons of Kiron III (which I lent to someone and now can't refer to it!), probably because the material was of particular interest to me and the 'internal organisation' was much better. I also enjoyed the Season Two Gossip. [4]

Kiron III and Katra present Androidz was a special issue, Androidz, jointly edited by Ian McLean & Chie-Hoon Lee in Australia and Lana Brown in New Zealand. A 150-page multifandom gen anthology fanzine, it was published in Australia in 1992. Androidz was originally announced by Scorpion Publications as a tie-in to a NZ convention with guest Brent Spiner (Data), but the guest list had to change and Lana lost momentum. Ian volunteered to reinvigorate the project, adding interviews with actors who had played robots and androids in film, TV and on stage, to the stories and poems already collected.

Above: A 1989 flyer, as published in Hypertension #29. The proposed zine promoted here became the zine published in 1992 by McLean and Lee, with permission of Brown.

Beyond Kiron III was intended to be published in 1993. It also had a Star Trek: TNG focus and would have included "The Music Lesson", a Star Trek: TNG script by Carolyn Boyd, and a new story by Sue Isle. Demand for print fanzines had slowed so the project was shelved.