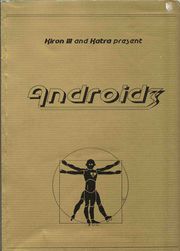 on the cover: Kiron III and Katra present Androids

Androidz is a 150-page multifandom gen anthology fanzine published in Australia in 1992 by Ian McLean and Chie-Hoon Lee. It is a special edition of both Kiron III, and Lana Brown's Katra.

Androidz fanzine: VHTF Australian fanzine (all in English), depicting stories and artwork from of robots of many fandoms. Put out for Robocon in Brisbane, 1992 by Kiron III (Kiron III issue 4) and Katra. Various artists & authors. Humour, drama, the lot. Fandoms include: Transformers, Alien, Star Trek: TNG, Blade Runner, Terminator, and many, many more in articles (including how to do body make-up like a robot) and much more. Also has artwork. Zine is black and white, with an orange section with a list of many robots, weird & wonderful, big & small from a myriad of galaxies. Bound with a lovely matte, metallic gold cover... [1]

The stories in Androidz are about people forming friendships and various other relationships with "human-shaped robots". Although all humans interact with "specialized machines" in our daily lives* 20th century science has not yet supplied us with the robots in "recognizable shapes" that science fiction has long been promising. Perhaps that is why SF/Media fans so quickly befriended Robby, Hymie, Astroboy, C-3PO, Bishop and Data when they came along.

Androidz is a special issue of Kiron III, a zine series usually devoted to Star Trek: The Next Generation and Lieutenant Commander Data. Androidz is simultaneously a special issue of Katra, Lana Brown's popular Star Trek zine series (currently in hiatus), usually devoted to Saavik, Vulcans and Klingons. We hope you enjoy our diversion into some new areas.

Several years ago, before Lana changed hats and fully immersed herself in a sea of SF/Media conventions, she invited Katra's contributors to forward fan fiction about their favourite artificial lifeforms: robots, androids, cyborgs et al from various SF/Media. She received enough items for half a zine.

Meanwhile, while seeking subjects for my Have Phaser, Will Travel column, now appearing in Locutus [the newsletter of Next Gen in Canberra], I noticed a common thematic thread: I had begun to specialise in interviewing actors who had portrayed artificial lifeforms in SF/Media productions. In fact, I had almost enough for half a zine.

Lana and I caught up with each other at the annual ConQuest (Quartercon) in Brisbane last year. A marriage of zine material was announced. Since then, Androidz, seems to have taken on a life of its own. Additional stories and artwork arrived. Chie-Hoon Lee and Garfield Barnard were roped in to help. Before we all knew it, Kiron III and Katra had produced a big, bouncing baby zine all about artificial lifeforms. And just in time to be launched at the latest ConQuest, coincidently known as Robocon!

Above: A 1989 flyer, as published in Hypertension #29. The proposed zine promoted here became the zine published in 1992 by McLean and Lee, with permission of Brown.

Androidz is a joint publishing venture between Ian McLean, of Kiron III, and Lana Brown, of the highly-respected (and rightfully so) zine, Katra. With these seasoned zineds helming the project, I expected Great Things, and the zine manages to deliver more often than not.

Granted, it is an odd zine, with perhaps a limited appeal, but it's well worth a look if you're a fan of androids and other artificial life forms. The zine is attractively packaged, with a shiny gold metallic cover sporting a delightful sendup of Da Vinci's anatomical drawing. Production-wise, it's a very classy little package. The pages are crisply white with clear black print marching in formation in double columns. There are next to no typos, and even those are questionable, as they may be legitimate alternate spellings rather than misspellings. Reproduction of the artwork is topnotch, and the care given presentation of the art was equal for all pieces, despite the wide variation in technical expertise demonstrated by the artists. There are some pieces which, though clumsily executed, show that a great deal of love has gone into their creation.

Cracking the zine and getting to the meat, the menu starts off with a humorous little ditty that sets the tone nicely and catapults the reader into the first course. Sue Isle's "Third Daughter" leads off, a chilling, well-paced fill-in-the-gaps Aliens story that focuses more on Ripley than on Bishop, although the android plays an important supporting role. The writer chooses her words with economy and continues to tighten the noose verbally, leaving the reader feeling disturbed, much as the movie did.

"Clockwork," by Ian McLean, is an early Lieutenant Data story that focuses on his taking his Kobayashi Maru test under the watchful eye of his mother/mentor, the captain of the Tripoli. This Data is a bit more mechanical than his televised counterpart, and seems a bit out of character. He takes a small windup toy squirrel along with him for the test, and, although I did cringe a little at what I felt was an attempt to make the character look foolish, I was later relieved to see that the toy did indeed serve a purpose, and was essential to the plot's resolution. I'll forgive this odd turn, since the author made it work.

Sadly, all the TNG fiction is adequate, but sheds no new light on the characters; and yet, that said, it is still far and away superior to the material being dished up with regularity in other TNG zines. "Moral Imperative" is similar to something I'd read previously, but I don't fault the author for that-after all, there are only five ideas in the entire universe, and they've already been used. But the story lacks the needed punch to bring it up to a higher literary level. And "Ollie" starts off with a promising premise: An alien robot has been discovered, and Data is assigned to watch and train the new android, on the notion that their mechanical natures will be compatible. The story makes several interesting points as the crew comes to accept the alien robot, and one wonders if they are so accepting of Ollie because they have already anthropomorphized Data. It does lay a nice groundwork for the episode [with Lal, "The Offspring"] and I found myself wishing that it had been developed more, but, like a TNG episode, it rushes headlong to a hasty conclusion.

Straight science fiction is represented in the zine as well, with Hazel Dodd's "We Do Know Love," a rather preachy piece about the evils of prejudice that suffers from a ping-ponging point of view. It is saved from being just another little ho-hum tale by the nice twist at the end.

"A Little Lower than the Angels," by Chie-Hoon Lee, is a very gritty and unpleasant story that echoes the whole darker feeling of the film, Bladerunner. It offers a possible happy ending for Decker, but a deliberately ambiguous ending left me wondering.

Further straight sf stories range from the mildly amusing "Who Terminates the Watchers?" (where, sadly the ironic twist the author was reaching for is never quite within their grasp) to "Hecate," another Aliens-based tale that starts off strongly, with overall high quality writing, until the introduction of the deus ex machina extraterrestrial. The wish fulfillment resolution is unsatisfying, weakening an otherwise superior story. Another sf story, "The Displaced," reads willy-nilly like the cartoon show it was based on, and would have made a good episode, as the author keeps the story very much in the Transformers style.

Rounding out the zine is an exhaustive and profusely illustrated compilation of androids and robots in television and movies, with some allusions to classical literature. I could have wished for a bit more detail in some of the entries, but I certainly applaud the effort.

The zine ends with an unusual mix of interlocking articles and interviews, beginning with a little article on costuming for a robotic character, aimed primarily at the novice costumer, and coupled with one fan's journey into full-body metallic makeup and the perils thereof. Following this is a series of three interviews with actors who have played robots, only one of whom was known to me. However, the questions were intelligent, and tailored specifically to each actor. Also offered was a nicely laid out list of each performer's credits.

I recommend Androidz to anyone who is looking for something a bit different, yet with the comfort of the familiar. It's not a zine that will appeal to everyone, and it sports a distinctive Down Under flair, but don't let that put you off if you're in the market for some good reading in the Aliens universe, or just a nice summer read.