Wackademia is a recording of filk and original music by Jane Robinson, with one by Dave Van Ronk. 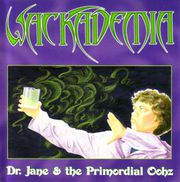 The last song has guest vocals by Marion Zimmer Bradley and Elizabeth Waters.

Wackademia was summarized in a June 1989 MZB Enterprises flyer as "A group of very funny songs about science and academia, by Dr. Jane and the Primordial Oohz. Cassette $11.00; Lyric/chord book $5.00.":

Well, I've finally found some modern music this back number likes. Believe it or not, I really enjoyed a group of rock musicians who call themselves "Doctor Jane and the Primordial Oohz" and whose synthesizer player is my son Patrick. Actually there are two Patricks in the Oohz in addition to Dr. Jane, my foster-son Kristoph, and Cynthia McQuillin, whom some of you may remember from THE KEEPER'S PRICE. And I actually sang backup on one of the songs on their new tape, WACKADEMIA. (We will be carrying both the tape and the lyric/chord book; see order form.) Much as I love Jane Robinson and her music, I still turn the volume down when I listen to it. I frequently wish we had a law like England's, where the playing of any radio audible to the general public is punishable by a fifty pound fine. I despise noise pollution no less than any other pollution. [2]