Care to Debate That? Vulcan Sexuality in the Night of the Twin Moons Universe

Care to Debate That? Broadside is an essay by Jean Lorrah. It is in R & R #3. 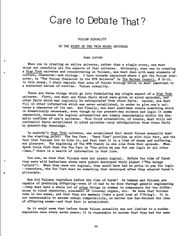 The essay is the first installment in a series of essays called Care to Debate That?.

Its topic: pon farr, the character of Sarek, and the male sexuality in NTM Universe.

When one is creating an entire universe, rather than a single story, one must think out carefully all the aspects of that universe. Obviously, when one is creating a Star Trek universe and concentrating on Vulcans, one must deal with many elements of culture,character — and biology. I have already explained where I got the Vulcan character, in "The Vulcan Character in the NTM Universe" in The Halkan Council, # 20-21. In this essay, I shall explain that area of Vulcan biology which is most important to a sustained series of stories: Vulcan sexuality.

How did Vulcans reproduce before the time of Surak? As humans and Vulcans are capable of producing offspring — even if it had to be done through genetic engineering — they must have a whole lot of other things in common to compensate for the differences in blood chemistry, placement of internal organs, etc. We know that Vulcans come in two sexes, and that they are mammals (take a good look at T'Pring). It is not unreasonable to assume sexual compatability, no matter how far-fetched the idea of offspring seems—and that fact is established.

One idea that has been used in Trekfic is that the Pon Farr explodes after the buildup of sexual tension from years of abstinence. In that case, a Vulcan male who had regular sex would never enter Pon Farr. Let's look at that like a logical Vulcan in the first generation in which Pon Farr struck. Emerging from first Pon Farr, he says to himself, "I never want to go through that again! If I knew the cause, I might be able to prevent it." His logic immediately suggests that the attack of satyriasis was connected to reproduction and the declining birth rate. So he determines to have regular sex...logically.

It doesn't work, however. If having regular sex prevented Pon Farr, every male Vulcan would—logically—start having regular sex the moment he reached sexual maturity. Marriage would take place then, rather than at first Pon Farr. Or, if first Pon Farr were the signal for sexual maturity, there would never be a second Pon Farr, for he would make certain he continued sex on a regular schedule, whether he enjoyed it or not! Yet despite such logical attempts to prevent it, the Pon Farr must occur regularly—otherwise, there would be no seven-year cycle!

There you have the main reasons it seems possible to have both Pon Farr and i sexual capacity among Vulcans. There is further evidence for constant capacity, at least in Spock (although we must always remember that Spock cannot be taken as typically Vulcan in physiology). Having lived for many years among humans, Spock would certainly be aware of the importance of sex to humans. Even if his activities with Leila Kalomi ("This Side of Paradise") never got beyond a few kisses before they were interrupted, he certainly seemed to have no concern about not being able to follow wherever she might lead. Do we have any questions about what he intended to do (did?) with Zarabeth ("All Our Yesterdays")? And again in "The Enterprise Incident" he seemed quite prepared, if necessary, to go through with the seduction of the Romulan Commander. She, by the way, obviously had no fear that a Vulcan cannot be seduced.

Amanda, however, has never heard of Pon Farr and is not sexually repressed. Coincidence or karma brings her into Sarek's life just after his Awakening. She can sense his response to her, but for a long time she doesn't believe it, setting it down to her imagination. When she finally decides to try to seduce him ("The Sensuous Thing to Do"), she is not certain he is capable of responding—and then she changes her mind about trying until the conversation, prompted by a volatile combination of human and Vulcan erotic poetry, leads her to kiss him out of pure frustration.

If we can get past our cultural inhibitions, we will immediately realize that the kiss as practiced between modern lovers is just as intimate as copulation. Vulcans don't kiss —or didn't before some of them picked up the habit from humans, Federation video programs, etc. Don't forget the famous Vulcan curiosity. Anyway, it is a totally new experience for Sarek, who has his psychic blocks down because he has been trying to reach Amanda empathically, and he's not very good at it. Neither is he very good at blocking when their minds suddenly do meet. If he had ever gotten himself into such a situation in the first place (highly unlikely), an ultra-controlled Vulcan like Sorel would have snapped automatic blocks into place at the first touch of another's mind. Sarek cannot do it that rapidly, and soon he doesn't want to try. Amanda's desire triggers his, and he loses control. The NTM Surak would say, "the cause was sufficient."

Now, let me answer some of the questions about NTM-Vulcan sexual patterns that have appeared in my mail. Some readers have asked why Sarek and Amanda did not have to return to Vulcan in "Time of Mating," In the NTM universe, the "appointed place" is an option in the bonding ceremony. Sarek was not bonded when he left for Earth. When he became bonded to Amanda, he didn't know exactly when his Pon Farr might occur or where he might be, so naturally he did not include an "appointed place" in the ceremony. Perhaps Spock's having one was a premonition on Sarek's part; more likely he merely assumed that Spock would be on Vulcan at the time of his first Pon Farr, and he wished to observe tradition to the full.

To return to the year's sterility: although. I have already used it to dramatic pur pose in Full Moon Rising, it is really in there for a future story in which Spock dis covers that he is sterile. But has it been a day, or several months? Will he go into  Pon Farr again tomorrow, or almost a year from now? Don't ask me the rest of the plot  of the story; one of these days it will come to me!

Finally, the only matter of Vulcan Sexuality in the NTM universe which ignores logic for dramatic purpose is Spock's conception, gestation, and birth. I absolutely agree with the doctors, biologists, chemists, geneticists, and other experts out there in fandom that Spock could not have happened that way. His very existence is doubtful, but that is "given" in Star Trek. As gestation in vitro of a genetic construct is not dramatically satisfying, I decided he had to be born normally. There is always the problem, too, of not repeating what another author has done beautifully. Because of Claire Gabriel's exquisite "The Decision" (Quartet), I decided there was no way a story in which the child had to be taken partway through the pregnancy could stand up to the comparison. Therefore, I opted for a complete, if very difficult, pregnancy." In building a complete ST universe, as opposed to writing an isolated story, Spock's birth is one element which must be included. Doing it as I have done has let me say a lot of other things I couldn't have said by having Spock a genetic construct. The Eugenics Wars gave me a logoical reason for Amanda's eugenophobia. Beyond that, I cannot defend it logically, and it would be absurd to attempt to do so.