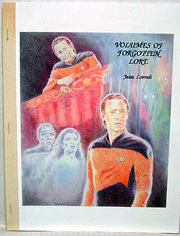 Volumes of Forgotten Lore is a gen 60-page novel by Jean Lorrah. The cover is by Marty Siegrist.

This zine was originally written as a script proposal. 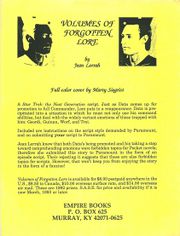 A Next Generation script by Jean Lorrah, full-color cover by Marty Siegrist. Just as Data comes up for promotion to full Commander, Lore reappears. Data is precipitated into a situation which tries not only his command abilities but his ability to deal with the variant emotions of Geordi, Guinan, Worf, and Troi. Rejected by Paramount, the script demonstrates precise format requirements and includes instructions for submitting YOUR script to Paramount. Planned for late Spring, 1992. File SASE to be notified when it is ready.

This was submitted as a TNG script. Lore wreaks havoc while pretending to be Data, and Data, Troi, and Geordi are subjected to a mysterious experiment by aliens. Deals head-on with that perennial fan favorite: Does Data have emotions? (Go ahead, take a guess.) Very enjoyable, and well within "official" limits of good taste. PG. [1]

Jean Lorrah's Volumes of Forgotten Lore is advertised as being a script that was rejected by Paramount for Star Trek: The Next Generation. I can't say that I blame them. It's not that there's anything seriously wrong with the story or with the execution of the script. It's just that there are so many small, annoying problems that they overwhelm its good points. It all adds up to an irritating zine experience, and would probably have provided a truly annoying hour of television.

Your first impression of the zine is that it is going to be terrific. That idea comes from the absolutely gorgeous cover by Marty Siegrist. Unlike so many zine covers these days, this one actually provides a compilation of story elements that we will encounter once we start reading. I have no idea how Marty does it, but she manages to convey, in colored pencil, much of the emotion that we will supposedly see in the script. The zine starts with a two and a half page lesson in how to submit a script to Paramount for consideration. (Tell me, am I the only person left in fandom who is not burning to write for these people?)...

Briefly, the story deals with Lore's latest attempt to displace Data, Data's attempt to get promoted to full commander, and a group of rather nasty aliens who kidnap some of the regulars for some mysterious reason. During a rather unpleasant reunion with his brother, Data is suddenly taken, at Lore's signal, by an alien transporter. Data's disappearance is quickly followed by those of Guinan, Geordi, Worf, and Deanna. They find themselves in a featureless room, with aliens that Deanna can't quite read on the other side of the wall. Then people start to die, and things begin to go to pieces. Far be it from me to spoil the surprise of the zine for anyone, but I did wonder why, if Lorrah wanted to reuse a plot from classic Trek, she chose Day of the Dove?...

Having enjoyed earlier works by Jean Lorrah, I approached Volumes of Forgotten Lore with anticipation, but was quickly disillusioned. I kept looking for the light touch that she has displayed in the past when depicting relationships between regular characters, particularly Sarek and Amanda or Kirk and Spock. There's none of that here...

The blurb on the back cover of the zine suggests that it may have been rejected by Paramount because Data is both promoted and acquires a greater understanding of human emotion. While that may be a nice comfortable fannish explanation--the bad Hollywood types acting out again. I suspect that the answer is somewhat less flattering to the author. From the date on the script, it is likely that Paramount already had the two parts of Redemption in the works when this was submitted. Data's command of a ship during the blockade in the second half would render this story superfluous. In addition, according to Lorrah, Paramount has made it very clear in its guidelines that it does not want unsolicited scripts about continuing characters. In case no one has noticed, Lore has shown up often enough to fit into that category. Pay attention to the stated rules, people!

But what bothers me the most about this zine is that it is just plain lazy. Jean Lorrah is a good writer when she wants to be. She could easily have taken this script, which is basically the outline of a story, turned it into a complete short story, perhaps even a novella. It wouldn't have taken much - a little character development here, some motivation there, perhaps a descriptive line or two. It's not that hard; she has done it - and done it extremely well in the past. This should have become a story really worth reading. God knows Next Gen fandom could use more of those. [2]

I had read was Volumes of Forgotten Lore and I completely agree with the reviewer in [Psst... Hey Kid, Wanna Buy a Fanzine?]. I bought it thinking "Cool cover, Jean Lorrah, sounds good..." It was only after I started it that I remembered that I had not liked her characterization of Data in Metamorphosis. Granted, he is a difficult character to write, but I just don't feel like she has a handle on him or anyone in relation to him. [3]