Data Base is a Star Trek: TNG zine with a emphasis on Brent Spiner. The zine was published by Mary Urban.

One focus of the zine were con reports by fans who had attended the relentless circuit of for-profit cons (such as Creation Con and TrekCon). These fans reported back to other fans what Spiner was like, shared photos of him, complained about the poor behavior of other fans, and transcribed the question and answer sessions with the actor.

Spiner and This Zine

In v.1 n.2, the editor mentions that Spiner was aware of this zine and "appreciated it."

However, this group walked a fine line regarding Spiner's approval, as he did not condone fan clubs that had a focus of himself.

Each issue of this zine emphasized that it was NOT published by a fan club. From the second issue:

DATA BASE is in no way affiliated with nor is a subsidiary of any other group, publication, or network. While DATA BASE is a proponent of fan networking, we are not a fan club. Neither do we condone fan club activities directed towards Mr. Brent Spiner contrary to Mr. Spiner's expressed desire. Any individuals mis-identifying themselves as representatives of DATA BASE and engaging in such behaviours do so at their own risk.

The subtitle/description of this zine morphed three times before settling on "A Literary Fanzine by and for Dataphiles."

Data Base was published in June 1992 and contains 24 pages. 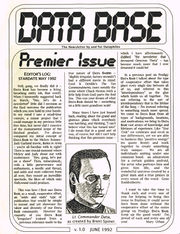 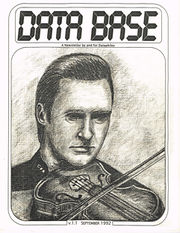 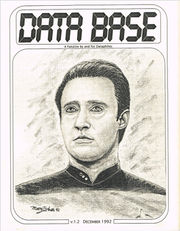 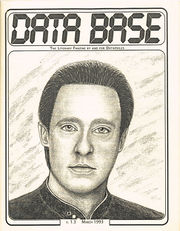 Data Base 2.0 was published in Summer 1993 and contains 37 pages. The art is by Debbie Neher, Mary Urban, Karen Hughes, Amy Knutson, Ginny Chan, and C.J. Marshall. 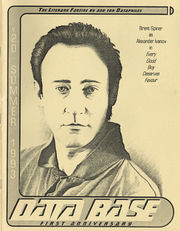 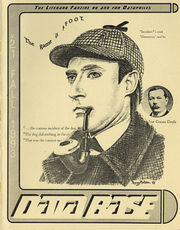 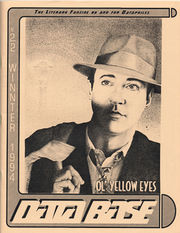 The art and cartoons are by Debbi Neher, Mary Urban, Julia Palumbo, and Amy Knutson.

It's hard to believe that Data Base is nearing its two year anniversary—it only goes to prove the maxim that "time flies when you're having fun." It's even harder to believe that Star Trek: The Next Generation is nearing the end of its seven year run. We all knew that the inevitable would happen some day, that all good things must eventually come to an end. if you feel as I do—and I suspect that you do—I'm sure that you share my sadness and regret over the series' demise. We will, of course, still have the reruns and the upcoming TNG movie in lieu of first-run episodes. But somehow, it just won't be the same.

The forum topic for the next issue is: "What are your thoughts about the end of TNG?" This is a topic that 1 wish we weren't having to face, but I wanted to provide a forum for those of you who wish to express your thoughts about the matter—and I'm sure that all of you have definite opinions and strong feelings on the subject. I don't think that I need to elaborate or explain the topic any further; it speaks for itself.

On a lighter note, the new poll topic is a sequel to a previous poll topic: "What questions would you like to ask Brent at a convention but never would?" The same poll appeared in the second issue (vol. 1.1), but at that time only those who were on Prodigy took part. It was such a fun topic that I wanted to try it again and include the whole readership this time out. Questions should be completely silly and trivial. Past questions included "What is currently in your refrigerator at home?" "Are you satisfied with your long distance service?" and "Do you prefer paper or plastic?" Let your imagination run wild, and have fun with this topic.

I'd also like to present a few concerns which I have regarding the future focus of Data Base. We want to keep the primary focus on Brent and Data for as long as we can. Brent has stated publicly that he will continue to do conventions after the series is over—which should take him to the end of this year—and we will certainly continue to cover those conventions as thoroughly as possible in order to provide you with updated information concerning Brent's post-Star Trek career. What is unclear, though, is how frequently Brent will appear or how long he will continue to appear at conventions beyond the end of the year once Star Trek leaves the airwaves and the TNG movie promotions end.

If Brent discontinues the con circuit, then it might become necessary to expand Data Base's mission and to open up the pages to a somewhat broader TNC theme. Again, the primary focus will be kept on Brent, but we may consider covering conventions of other TNC actors who remain on the convention circuit.

Data Base v.2.3 was published in Spring 1994 and contains 42 pages. The art is by Mary Urban, Debi Neher, Karen Hughes, and Amy Knutson. 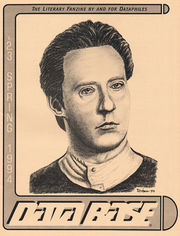 The editor thanks Vincent Mennella, head of Star Productions, for suppling the audio tape of Brent's San Antonio convention.

Data Base v.3.0 was published in November 1994 and contains 42 pages. The art is by Mary Urban, Debbi Neher, Karen Hughes, Amy Knutson, and Julie Evans. 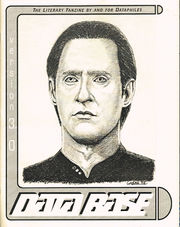 cover of v.3.0, Mary Urban, Data talking to Dr. Soong on the Holodeck in the episode "Inheritance"
Retrieved from "https://fanlore.org/w/index.php?title=Data_Base&oldid=2401604"
Categories: