From Fanlore
(Redirected from Drabbles)
Jump to: navigation, search

Traditionally, a drabble is a piece of fiction that is exactly 100 words long. However, it is not uncommon for people to label any extremely short piece of writing a "drabble". This is known to irritate some readers, while others consider the distinction unimportant.

The term itself comes from Monty Python's 1971 Big Red Book, which declared the drabble a word game in which two to four players compete to be the first to write a novel.[1]

Drabbles emerged within British science fiction fandom in the 1980s; the Birmingham University SF society is credited as being the organization that set the length at 100 words.[1] The form remained popular throughout the decade, and the British science-fiction publisher Beccon Publications put out three books of drabbles in aid of charity between 1988-1993. The third book, Drabble Who, had a Doctor Who theme and presumably many of its 100 drabbles could be considered fan fiction.[2]

A fan in 2008 posted: "Hey. I am a British science-fiction fan. Under no circumstances do I use the word "drabble" except in its original, precise, meaning of a "story of exactly 100 words" with a title of up to 15 words, hyphens to-be-argued-about. I'd be banned from Novacon." [3]

Media fandom picked up on this in the early to mid-1990s.

Doctor Who fan fiction group alt.drwho.creative was established in 1993, the same year Drabble Who was published, and drabbles were a popular form for most of its active history. The group's annual awards, presented from 1998 to 2005, always included a separate category for "Best Drabble". 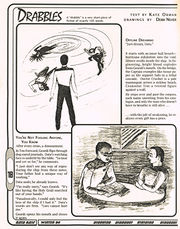 A very early media example of drabbles, these by Kate Orman in Data Base v.2.2, a Star Trek: TNG zine. Orman probably introduced the fans in this zine to the form because she was familiar in them in the Doctor Who fandom.

In 1994, the Star Trek: TNG zine, Data Base, published four drabbles by Kate Orman, complete with illos by Debbi Neher. They were introduced by this statement: "A 'drabble' is a very short piece of fiction of exactly 100 words."

In mid-1996, in the letterzine Late for Breakfast #29, the editor explained drabbles: "A drabble is a short story comprising exactly 100 words, (excluding the title) and several mainstream books of them have been published." "Late for Breakfast" #29 included several examples: a Lone Ranger/Tonto one, a Sherlock/Watson one, and a Voyage to the Bottom of the Sea one.

On the Due South adult mailing list, DSX, drabbles and drabble variations were being posted at least as early as July 1997, and probably for months before that.[4]

An example of a Sentinel drabble posted in March 1997: Study.

The main variation was (very briefly) called a "drobble"—a freeform round-robin where each participant would post 100 words (exactly) to the ongoing story. Each story was eventually collated and posted to the Due South Archive with "DSX list" as the "author". By this point they were just being called "drabbles" again, for convenience's sake.[5]

Due South fans spread drabbles into other fandoms, but despite a couple of determined attempts in Highlander (and possibly in Sentinel), the list-wide round-robin form never really caught on anywhere else, and soon fell out of fashion in Due South as well.

By the early 2000s, drabbles were being written in many large media fandoms. The mainstream press article And now, ladies, just for yourselves... When Harry met Garry, written in 2001, mentions drabbles.

Because drabbles are so short and accessible, they are often posted on social media platforms. On Tumblr it is common to write drabbles as responses to ask requests or post them in text posts. Often writers collect multiple drabbles and post them as a single work on a fanfiction site, rather than having to upload many short works. 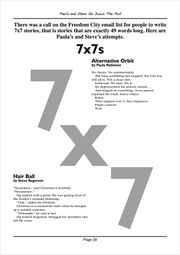 A similar style, one featuring 155 word stories began in the The X-Files fandom in November 1998. Another one began around 2010 for Sherlock Holmes; it was called 221B.

The Blake's 7 fandom includes "7x7s," stories that are exactly 49 words long. The "7" part of these fanworks references that fandom's title.

At least as early as 2000, there were 55-word challenges in Harry Potter[7] and Farscape fandoms. The dribble, a specific form of 55-word story, was invented by Ismenin with LotR RPF in October 2005[8] and was briefly popular in the related fandoms of LotR FPF and The Faculty[9] and was the theme of a challenge at the hobbit_smut community in November/December 2005.[10]

A drabblethon is a ficathon composed entirely of drabbles: this can be an enjoyable way of taking part in a ficathon without the usual time commitment.[11]

Wednesday100, a Smallville community started in March 2003, may have been the first LiveJournal community to offer a weekly prompt challenge that participants answer with 100-word drabbles. The community grew from an entry[1] posted by dammitcarl on Livejournal. A partial list of the many LJ comms dedicated to drabbles is available at the community profile page.

Flashfiction communities and challenges often use 100 as the minimum wordcount for allowed story posts. The Fanfic100 challenge, begun in October 2005, provides a table of 100 prompts which must each be answered with at least 100 words. Many related challenges have followed this model, including drabbles100, in which participants must write 100 stories of exactly 100 words each.

Drabbles, Drabbles Everywhere was a site with a focus on drabbles.

Some authors use the term 'drabble' to mean any short story they write that they tossed off, as opposed to stories they were more serious about. These long-format drabbles can be a thousand words or more, depending on author. Fans who believe the word 'drabble' should only apply to stories of exactly 100 words may prefer to call other very short stories ficlets, snippets, or vignettes.[12] Fans who take drabble-writing seriously may resent the suggestion that drabbles are written without much effort or care.

Some readers find drabbles and other very short forms to be unsatisfying to read and have complained that their popularity in recent years is related to an increased dependence on instant feedback since the shift from mailing lists to LiveJournal. According to this argument, authors write drabbles so that they can post frequently and receive a lot of comments, and the trend discourages them from writing the epically long fics that were more common in the past.[citation needed] Posting a lot of drabbles to an active community can be viewed by the community as spam. The merlinxarthur community changed its rules[13] after frequent daily drabble posts to "No more than one post a day (i.e. within 24 hours), five posts per week."[14]

Other readers (and writers) enjoy drabbles for their succinctness and brevity. Telling a complete story in only 100 words is a considerable challenge, and some writers enjoy the drabble form because they enjoy rising to that challenge.[15] Some fandoms have awards for drabbles like The Merlin/Arthur Drabble Awards in Merlin fandom.[2] Many prolific writers of drabbles also write longer-form stories.[citation needed]