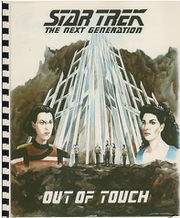 Out of Touch is a gen 82-page novel by Jackie Paciello and Toni Lichtenstein Bogolub. Illustrated by Jim Wappel.

This is a novel featuring a hurt/comfort story involving Picard, Ro, Riker and the other crew members.

From an ad in Zine Scene: "The action story you don't want to miss! Picard and Riker lead an Away Team on an archaeological survey, leaving Data in command of the ship. But the mission turns into a struggle against death for the Captain, Ensign Ro, and Riker."

Not Data-centered, but has poignant Data scenes. An away team consisting of Ro, Riker, and Picard gets into a perilous situation while exploring crystalline formations, while back on the Enterprise, Acting Captain Data and Counselor Troi learn to relate to one another. Troi knows Data feels inadequate and worries about hurting his feelings (she also doesn't buy into that "emotionless android" routine). Similar in tone to [the episode] "Tin Man," which it openly references. The Data-Troi scenes are very touching! Oh, and the adventure stuff down on the planet wasn't bad either. [rated] G. [1]