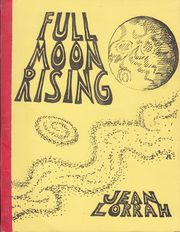 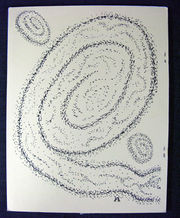 Full Moon Rising is an NTM-universe Star Trek zine. It contains five stories, all but one are by Jean Lorrah.

The zine also has illustrations by various artists.

Unlike the other three NTM zines, it was first published as R & R Special Edition #1 by Johanna Cantor and Lucy D. Witt. This series of stories centers around Sarek and Amanda in their early relationship and marriage and is meant as a follow-on story to Night of the Twin Moons. Other stories in the series at the time the zine was published: "Domestic Scene With Sehlat," in Sol Plus #3 and "The Ambassador's Nightmare" in Warped Space #16. The zine went through multiple printings: 400 copies in the first printing and 200 in the second printing. By the time of the sixth printing over 2,100 copies had been printed. Original cost: $3 bookrate, $3.75 first class and $4.50 overseas.

It required an age statement "no one under 16" to purchase, one of the first media zines to do so.

The original printing was 97 pages. A later printing may have been 159 pages. The zine was given a Library of Congress number: A 822761.

Zines, Stories, and Essays in the NTM Universe

While Jean Lorrah asked that fans not write in her Epilogue universe, she "heartily encouraged" fans writing in Full Moon Rising (and The Night of the Twin Moons) universe:

There are plenty of other stories to be told that I don’t have enough time to tell. All I ask is if you want to write in the universe, please send me an outline before you start to write, so that if there is an inconsistency — which will probably be because I knew of something planned that hasn’t shown up in a story yet — then usually very minor tinkering can take care of that when the story is in outline form. [1]

This is a Sarek/Amanda 'zine written by Jean Lorrah. The writing is excellent, but the theme gets a bit repetitious. Jean's Sarek doesn't bear much resemblance to the man we glimpsed on aired ST, and her Amanda is too good to be true. But Jean does write well! [2]

FULL MOON RISING is a series of four Sarek-Amanda stories serving as a prologue to the NTM universe. They trace the S/A relationship from their bonding to the conception of Spock. Lorrah maintains internal consistency, and her characters are well-drawn. [3]

This is a very nice collection of stories for Jean Lorrah fen. If you enjoyed Night of the Twin Moons, this is a must. Many of the flashbacks in that novel refer to the stories here... I know there are some readers out there who disagree violently with Lorrah's interpretation of Sarek. To me, these stories are a logical extension of what we saw on 'Journey to Babel.' [About the art]: It is unfortunate that the artwork could not have been better. Monica Miller's illustrations are, in my opinion, the best. They are all very well designed and executed, and the likeness of Sarek and Amanda to their TV depictions are usually good. While Signe Landon's design and execution are almost as good as Miller's, her Amandas do not resemble any Amanda I know and ever her Sarek's are marginal. The same is true of the illos by C.R. Faddis. Jean Lorrah's title page design is good, and Amy Harlib's cover design is possible. However, the other pieces of art do not deserve comment. The stories, of course, are fabulous. However there is abundant and explicit sex; some readers may wish to avoid this zine for this reason. ' The Sensuous Thing to Do' is about the night when marrying Amanda became for Sarek the logical to do... Here and elsewhere, Lorrah makes skillful use of quotations to depict ideas and emotions that were often best expressed by poets decades and centuries ago. 'The Tenth Night' is a somewhat rambling tale of of the events occurring ten days after Amanda and Sarek's Federation wedding. It seems to be a gap filler more than anything else... Amanda finds out about and experiences pon farr in 'Time of Mating.' She also shows her resourcefulness by informally instituting some new Vulcan reforms. This story is so enjoyable that it almost seems tongue-in-cheek, but it is refreshing to read an author who appreciates sex for the pleasure it gives. I am rather tired of the serious, Victorian attitudes of the Kraith-type story... Finally, in the title story, Spock is conceived. Lorrah's explanation of Spock's conception and birth is the most acceptable one I have read. She has taken the effect of the Eugenics' War into account... 'Full Moon Rising' will provide an hour or two of very entertaining reading for Lorrah fen. Those generally interested in Trekdom should also read it as it does represent a major 'school of thought. [4]

This collection of four stories featuring Sarek and Amanda is part of Jean's 'Night of the Twin Moons' universe. They are all delightful and I for one can't get enough. I find myself liking her version of Sarek in spite of myself. "The Sensuous Thing to Do", the lead story tells how Amanda meets Sarek and finally decides to seduce him, She gets a rather pleasant, or unpleasant depending on how you look at it, surprise. She learns something about Vulcans that most humans don't know, they do have emotions.

"The Tenth Night", takes place ten days after their Federation wedding, With the use of flashbacks we meet Amanda's brother, his wife and their two sons; we also discover Sarek has a sense of humor, Sarek's mother already has plans for their childcrn using eugenics said and Amanda is horrified, but Sarek manages to calm her fears.

"Time of Mating", is a Pon Farr story. Amanda gets a message saying Sarek is gravely ill and rushes to the Embassy (she has continued her career as a teacher at Harvard). When she arrives, she is told Sarek is in Pon Farr so they have a quick wedding by the Vulcan rite. Amanda discovers a trick that takes the pain out of Fon Farr and turns it into pleasure, which she promptly passes on to a married Vulcan woman on the Embassy staff, who later finds it useful, I think Amanda played havoc with a lot of Vulcan traditions here, and for the better,

"Full Moon Rising" is about the night Spock was conceived.

The whole zine is delightful, and I found myself extremely tickled at Sarek's subtle sense of humor, I feel Sarek fans will enjoy this sine which is told from Amanda's point of view and deals with the first two years of their marriage. There is one poem by Caroline Carrock; artwork ranges from very good to very bad. An excellent zine. It is not sold to persons under the age of 16 due to subject matter I feel was very tastefully handled. [5]