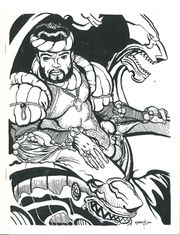 Wulfstone is a 50-page fiction and art zine. Its subtitle: "THE MAGAZINE FOR FANS OF JEAN LORRAH'S SAVAGE EMPIRE SERIES."

There is much talk of Star Trek in this zine including an illo of Uhura by Carol Walske reprinted from an issue of Fuhura. The writers' panel transcript also discusses Trek and fan writing.

The zine is called "Wulfstone" online, "Wolf-Stone" and "Wulf-Stone" on some flyers, but the Savage Empire character is "Wulfston."

"Wulfston" is a sort-of persona of Winston Howlett, one of the pro book collaborators.

This issue is lovingly dedicated to Jean Lorrah for creating the Savage Empire universe, and letting the rest of us conquer kingdoms in it."

Some things are inevitable. Take fan-produced magazines, for instance. Spend eight or nine years in an interesting place like Jean Lorrah’s Savage Empire universe, co-author two books in the series, re-read each book five or six times and what’s the result?

You’re holding it in your hands.

This is the premier issue of what will be (we hope) a three-issue fanzine run; three excursions along the backroads of the Savage Empire in fiction, poetry and artwork, plus articles about the creative process.

ROBERTA ROGOW, whose many talents include some of fandom’s best songwriting, contributed one version of the inaccurate song mentioned in Dragon Lord of the Savage Empire, the one that started Wulfston’s troubles in Wulfston’s Odyssey. Roberta was also the host of AugusTrek, the 1979 science fiction convention where the panel discussion “Creating Universes” was held.

Artists JOHN HAZARD, DAVE KNIGHT and KEVIN SPENCER each gave his own unique interpretation of the Savage Empire. For our back cover, Kevin did his version of Wulfston and Torio escaping from the Aventines (from Captives of the Savage Empire). Dave beautifully handled the tricky task of illustrating two very different song-poems with one picture. And besides giving us our first front cover, John was asked to merely do one or two illustrations for “Dare and Double Dare”; his ten-page ‘comic book’ rendering of the story was quite a delightful surprise!

DOUG HERRING and CAROL WALSKE very kindly rounded out things in the artwork department, and friends too numerous to mention provided help and inspiration when this project threatened to get bogged down in one production delay too many (My thanks to you all!).

The editor writes on the last page of this zine:

Hopefully, Wulfstone 2 will be available May 1990. It will contain stories (about other Savage Empire characters as well as Wulfston), cartoons and other features, including an interview with Jean Lorrah.