Feminism in Treklit is a May 1977 written re-cap of an audio-tape of a panel discussion that was originally held at SeKWester*Con in April 1976. 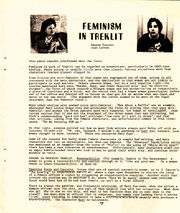 First page of the essay as it was printed in the 1977 program book. One photo is of Jean Lorrah (tall hair). The other is unidentified. 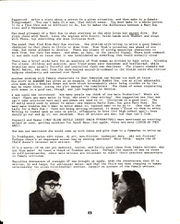 Second page of the essay as it was printed in the 1977 program book. The two photos are of unidentified fans.

The original panelists were Sharon Ferraro and Jean Lorrah.

The topic of the discussion was the characterization of female characters in Star Trek fanfic, Mary Sue, feminism, and differing tastes and expectation of male and female fans. The article mentions many fanfic examples.

This panel rapidly overflowed onto the floor.

Feminism in much of Treklit can be regarded as nonexistent, particularly in GRUP-type stories [1], where action is usually little more than classic fantasy situations with Trek characters (excuse please) plugged in.

Some stories are anti-feminist in that women are segregated out of them; action is all concerned with the male characters, and the implication is that women are not liable to participate in such matters. Others concern women, but in a very negative light -- the stories mentioned here were "Murder, Rape, and Other Unsocial Acts" and "An Abortive Attempt"; the first of which treated a Klingon woman and her mother-in-law as respectively a piece of furniture and a bitch; and the second that had a human woman gynecologist jerked out of her office and ferried off to Vulcan on charges for an action that was legal and moral on her own world. (The argument with the latter seemed to be more on the legal precedent than the feminist issue.)

Many other stories also seemed quite anti-feminist: "How About a Raffle" was an example, whereupon Mary Louise Dodge rose and astonished the floor by stating that they were anti-feminist -- and anyway the Orion dancers were only humanoid, not human or intelligent. Jean Lorrah replied that it was not the treatment of the Orion women that was irritating, but Kirk's condescending "good old boy" attitude--"the cute li'l girl is drunk", and that that attitude, coming from the female characters, was unfortunately common in Trek literature. "Do my thinking FOR me."

On that topic, someone pointed out how so many Trek writers always pair McCoy off with an innocent 18-year-old: "Oh, yes, Leonard, I wouldn't do anything to hurt you, Leonard, your every thought is mine, Leonard." There are uncounted Mary Sues...

Some of the reasons for badly drawn female characters is simply, bad writing, and male characters are just as unrealistic, but this can improve. The "Showcase" Sarek/Lorna series was mentioned as an example — from the Lorna of "Misfit" to the Lorna of "While We're Apart" there has been a vast elevation of consciousness. Unfortunately, many characters start out as empty bubble-headed twits who look to men to guide their every step, and continue interminably as twits.

ISSUES IN FEMINIST TREKLIT: Responsibility (For example, Damion in The Daneswoman) A woman is given a responsibility and carries through on it 'like any good man.' Or a woman needs to learn responsibility, or does so.

Feminine Needs and Concerns Issues that are of special concern to woman, as in J. Cantor's "The Hearing" in INDEPENDENT ENTITY #2, where a rape case threatens to obscure the issue of a female officer's rights by triggering an overprotective reaction.

Another story that covered the problem was in MASIFORM D #4, where "Here We Go Again" showed some problems Spock could have had if he had been female, as well as a first officer.

There is always the problem, and frequently criticism, of Mary Sue-ness, when one writes a female officer onto the ship, and part of this usually lies with her occupation: what does she do? Why is she on the ship, and what is her function when she is sent down to the planet? One must show an officer that is competent, but human (the Landing Party 6 series cited), since yielding to temptation to make a S*U*P*E*R*W*0*M*A*N usually only produces a M*A*R*Y*S*U'*E. The character must be believable.

Suggested: write a story about a person in a given situation, and then make it a female. Disagreement: You can't make it a man, then switch sexes. You must make it a whole person. It is a fine line and is difficult to do, but it makes the difference between a Mary Sue story and a Daneswoman.

One dead giveaway of a Mary Sue is when everyone on the ship loves her except Kirk. She plays chess with Spock, tunes the engines with Scotty, holds hands with' Chekhov and sings with Uhura, but everything she does irritates Kirk.

The panel then fled from Mary Sue stories. One problem with trying to write a good female character is that there is little to draw from. Star Trek's potential was ahead of its time, but never allowed to develop. There are plenty of strong masculine characters to work from, but very few women. And when, at last, in the Lorelei Signal, Uhura took command, it was made such an issue that it was invalidated as something that would normally occur.

There was a brief aside here for an analysis of Trek women as divided by hair color. Allowing for aliens, children and androids, most blond women were dependent and ineffectual, while brunettes were usually forceful and controlled their own destinies. The classic example was Majel Barret, who went from the dark-haired second-in-command to the blonde nurse who trotted bedpans obediently and swooned over Spock.

Another problem with female characters is that feminism can become too much an issue. One story in ACADEMY was given as an example, in which number One, now an alien ambassador, sits down with a Romulan woman and both bitch interminably about being trodden on by the men in their lives, losing the plot amongst the complaints. The theme of women cooperating with women is a good one, though, and just beginning to develop.

A new topic was introduced: how many people can think of one male Trekwriter? Where are they? There are many males in Trek; why aren't they writing? One suggestion was that men can't take criticism very well and women are used to it. Criticism is a good tool. The ST world would seem to appeal to males--one expects Marty Sues, but gets Mary Sues. But many male trekfen don't want to write about it, instead want to be in it. (But that's the basis for a Mary Sue.) Guys not being writing-oriented, it doesn't occur to them to write. Writing is looked upon as cute in girls, effeminate in boys ((of high school age)); boys should go out and do it, not daydream. Most SF writers are men, but that isn't Trek.

Cogswell and Spano ((MAY SLIME DEVILS INFEST THEIR TYPEWRITER)) were mentioned as trotting around at cons, getting opinions for Spock Mess--but again, those are pros ((SUCH AS THEY ARE)).

One man was mentioned who would come up with ideas and give them to a femmefan to write up.

It's a waste -- if we can get mediocre, rotten, and fairly good ideas from female writers, why not from male? At least a third of Trekfen are male. Perhaps the dearth of men in zines is self-perpetuating, since male writers are reluctant to submit their precious manuscripts to female criticism.

Masculine domination of straight SF was brought up again, with the observation that SF is written, by and large, for adolescent males--and that the field has been changing to human-relationship (or alien-relationship) stories, largely on account of the female writers.