For things with a similar title, see Academy.

The Academy is a gen Star Trek: TOS club zine.

According to a 1973 STW Directory, it was published three times a year, and it contains "shorts, poetry, ads, and articles." It was edited by Marel Lilek.

One issue contains a reprint of the story The Garden Was a Wild.

Academy v.2 n.1 was published in January 1973 and contains 47 pages. The front cover is by Najunayupi and called "Turnabout Intruder." The back cover is by Rebecca Cope and the interior illos are by M. Lelik. 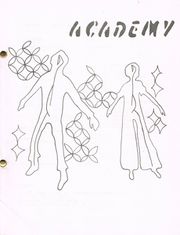