The Misfit is a Star Trek: TOS story by Shirley Maiewski. It has the subtitle "A Star Trek Romance." 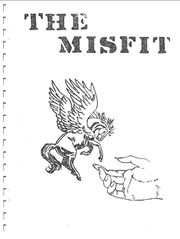 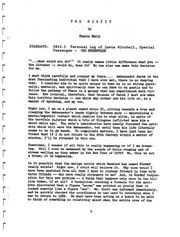 It has art by Sharon Emily, Karen Flanery, and Virginia Tilley.

It was published in the print zine Showcase #1 where the author notes that it was inspired by the story Stay!.

It has a sequel in "Showcase" #2 called "While We're Apart."

From the Author's Introduction

Have you ever read something that had such an impact upon your imagination that you found yourself writing on that same theme? Such was my experience when I first read Norma M. Smith's STAY! In fact, the story invaded my dreams and continued beyond the point where Norma stopped. Generally, story ideas that come to me in dreams vanish the moment I wake up. This one didn't, possibly because I'd seen a re-run of "Journey To Babel" that same week.

That dream haunted me, demanding to be written, but my work schedule was so heavy that it was all I could do to squeeze out time to watch "Star Trek" -- writing was out of the question. Eventually, neglecting my health one time too often put me into the hospital for many weary weeks. What better time to write out that dream and get it off my mind? A very odd thing happened when I first put pen to paper, though; a calm voice seemed to be speaking within the depths of my mind, dictating the plot. I wrote, and wrote, and wrote, and wrote. Indeed, this manuscript provided priceless occupational therapy during a year of convalescence that I consider my personal Gethsemane. When I finished the handwritten version, I came to the conclusion that if a voice had been speaking to me, there had been a lot of communication gaps; the manuscript was so terribly rough in spots that I hid it.

Since I'd begun working as a freelance secretary, I "didn't have time to do a revision." However, the manuscript started to haunt me, and I found myself dragging it out to work on it at the oddest times. In the interim, I'd had the privilege of becoming postally acquainted with Norma Smith. Finally, I asked her if she'd ever done a continuation of STAY! or if she knew of anyone else who had. She must have suspected what was coming, for she said that she'd like to read my continuation. Her generosity knew no bounds, for she liked my idea and hoped I'd try to do something with it...

It's been said that "Star Trek" fan stories are written by adolescent females who feature themselves with their favorite hero. ???? I'll admit to looking within my own mind and heart for reactions to certain situations -- what writer doesn't? However, I've not been an "adolescent" for so long that I now have one of my own running around the house. Also, my heroine isn't based upon any one individual; she, and her history, is based upon a composite of people and family circumstances I've observed during nearly two decades of life with a husband who works in a very demanding public profession.

There is one technical note: Whenever my heroine is thinking directly instead of making a recording, her thoughts are denoted by underlining. When she is in mental communication with another, this is denoted by the use of the slash (//).

Even after nearly four years of work, this book isn't perfect -- not by any means. However, you've waited so long that I can't delay publication any longer.

Art is by Karen Flanery.

Thank you for the MENAGERIE, Vol 1 no A. I especially enjoyed SPEAK ROUGHLY TO YOUR LITTLE BOY.

I have only two comments. Paula has mastered the art of keeping a narrative moving, which for some beginning writers is the hardest thing to learn. But now that she has, I suggest that next time she take a deep breath, slow down, and consider some of the hows and whys behind the events in her story. I think she can afford the luxury of a little padding....You have a tremendously vital drama here, and I think it would have benefited from more thorough development, (translation: I like long stories, so please write some, there's never enough trek.)

Actually what you've got here Is just the bare bones of an outline. Compare this with MISFIT for example, and ask yourself how Sharon Emily would have treated your material. Now, MISFIT is overdeveloped. A great deal is redundant, and it could be cut to half its length without damaging the story and with incredible improvement—if you know HOW to cut that sort of material. Yours needs to be "overwritten" like that, and then cut back, and you'll find your work enriched beyond your dreams. [1]