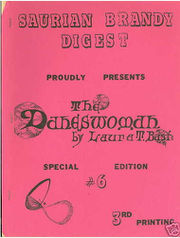 The Daneswoman is a Star Trek: TOS story by Laura Basta. It was one of the first full-length novel Star Trek fan-written stories published.

It is the story of Captain Morrow Akal Damion, the first female Starship captain, who has a brief no-strings affair with Spock.

"The Daneswoman" was mentioned in Star Trek Lives!.

This story was first published in 1972 as Log of the Starship Enterprise #3 (also known as "The Tholian Web" #3). That zine contains no interior art.

There was to be a sequel, but it was never published:

Laura Basta is rewriting her classic ST novel Daneswoman and its yet unpublished sequel Yesterday Always Remains for boojums Press. The pair will be published sometime in the next six months. [1]

It was later published in Oct/Nov 1977 as the entirety of Saurian Brandy Digest #6. That version has 91 pages.

I have the funniest feeling that I really shouldn't be saying anything about The Daneswoman, but I'm going to anyway. I started writing this story for fun, but halfway through I realized I was still writing it for fun. Somehow my goal of turning this into a Morality (OR AMORALITY) story just didn't realize. I really don't mind and hope no one else does either.

I'd been spurred off by reading some other short stories dealing with situations close to this one, and decided to try my own hand at it. If anyone thinks this story, and it's premise is raunchy or questionable, then I'm sorry I offended. I'm not really quite sure why I wrote it, but felt it was about time I did. What Spock and Damion did was 'wrong' according to today's moral standards. But they were guided by the complex ethics system of their own planets and cultures. It is vastly improbable to believe that the moral codes we live by today are going to be exactly the same in the twenty-third or twenty-fourth century (OLD CALENDAR). Our own times are rapidly changing. With various races, with all the people of the Federation, it is doubtful that marriage and relationships, their ceremonies would remain rigid and the same as today's Earth. I wrote The Daneswoman on the premise that in their time, affairs would be acceptable and above board, when between two mature people. Mistresses, concubines, "second wives", have all been part of man's complex civilizations since before written history. I feel it is quite possible that they will remain so, though with a more acceptable status in future times. Read, enjoy, or hate. I'd be interested in knowing. This is my revised rough draft and it's about sixty pages shorter than the original draft. I hope my english end spelling is improved and at least passable, and I hope my whole style isn't as wordy or as smaltzy as it once was.

After hearing of this for almost a yearn now, I finally ran into a copy at TorCon. Although my own funds were sorely depleted, my companions each purchased a copy, and I got a chance to read it. Not every writer can turn a cathode ray tube character into a believable flash and blood character (green or otherwise) and keep it up fro such a length of time... Laura Basta has succeeded admirable. As she readily admits in the introduction it is no great moral or immoral work, but it is good reading. For those sorely disappointed at the end of Star Trek's TV demise, this carries on the transition admirably. Although I disagree that what Commander and Spock was wrong, that is a moot point. Ms. Basta's McCoy was especially good and she maintained that real McCoy's character almost flawlessly... (For those of you who don't know what I'm talking about, Ms. Basta's was published in full in "Tholian Web" I believe about a year ago. It is rather long, compared to the standard fare of Star Trek related writings but eminently worthwhile and enjoyable.) [2]

To all the people who have sent [S F] and me SASEs about Laura Basta's sequel to Daneswoman (in Tholian Web"): at this point, there is a possibility of Bantam publishing the novel. Therefore, we cannot bring it out as a fanwork, NOW. If they decide against printing it, THEN we get to. However, things are still up in the air about it. Right now there is nothing definite. [3]

Damion is the Captain of the Republi., currently carrying diplomats, She has. some  ESP ability, and when the Enterprise' enters orbit round the planet the Republic is  also orbiting, she knows she will meet someone important.

A party of Humans, including Kirk and McCoy, are talking on the base when a woman joins them, challenging one particularly chauvinistic one to a game of chess and beats the pants of? him. It is Damion.

Spock is approaching pon farr, Damion realises it. Offers to help, Spock resists...or a while.

When he refuses to beam up as arranged "I have enough leave time accumulated...",  Kirk is startled, McCoy worried and suspicious.

Spock and Damion, in spite of getting on well together, realise that they, could not serve together? This is a brief interlude - even though, with pon farr dissipated - he still desires her. By this time McCoy has worked out the truth...

With leave ended, the two ships, go their separate ways, but the Republic is overdue for an overhaul, and something goes wrong. The Enterprise answers her distress call, knowing that whatever happens, the Republic is a doomed ship, and Damion, because she is a woman, will be blamed for the malfunction...

This is a type of story I dislike (though it's an early pon farr story, I've read enough of them now to last me. '. Assuming they come every seven years, Spock must be a decrepit 8799 now...). I also dislike the 'brief encounter' affair, intense but "I love you" even though both parties know, that it will be brief. But that's a soapbox I'm better to stay off. (I once, read a pon farr story that I thought I would enjoy; it was logical, unemotional, sensible, until Spock suddenly decide that he was in love with the girl, and it was no longer a matter of logical convenient. And that ruined the entire mood of the story for me. But that's another story.). This one is better than many. However, I felt that there was a great deal left unexplored in the story. Damion is stated to be a Daneswoman; it is indicated that this is something important on her planet. She is indecently rich, for example. But we're told nothing more. The story turns into nothing more than her affair with Spock, and it could have been so much more rewarding. I felt, if that it had been only a short part of the story and more had been written regarding her background etc. Even the emergency on the Republic emerges as part of the affair, inserted, apparently to show how Spock still cares for her.

I don't know if this was the first fan-written pon farr story or not; it was certainly one of the earlier ones. Back then there was a definite tendency to produce stories that had Spock falling passionately in love - I think there has been something of a swing away from that theme in more recent days (since the coming of K/S), or maybe I just haven't been reading the right zines; but I think the tendency now is less towards having Spock finding the love of his life, and possibly more towards  stories concerning Kirk. However, stories go in cycles; and who's to say that in  another ten years' time, Spock-pon-farr-in-love-with-the-girl won't again be the  order of the day. [4]

This is one of the first novel-length Star Trek fanzine stories published. The story enjoyed great popularity for many years, probably because of the strong female heroine (a Starship captain) who had a romantic relationship with Spock. In her introduction, Laura said, "I wrote The Daneswomanon the premise that in their time, affairs would be acceptable and above board, when between two mature people. [5]