Rebellion was a multi-media con held in Houston, Texas in 1990. It was hosted by Blake's Several. 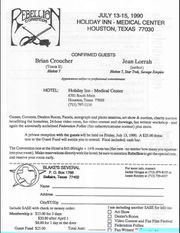 Guests of Honor were to be Jean Lorrah (writer) and Brian Croucher (actor, Blake's 7). Croucher ended up not attending.

There was a private reception with the guests of honor. "A $25 donation to the Guest Fund will entitled you to attend. Food included; cash bar."

There were plans for a second con, but it was canceled. "The money crunch is such that we decided to give ourselves an extra year of fund-raising. Look for us in the fall, 1992. We've tentatively set a date for the Columbus Day weekend in October, but we're open to suggestions. [1]}}

Compared to last year's edition, Rebellion '90, hosted by Houston's Blake's Several group July 13-15, was a smaller, more intimate convention. Because of the smaller number of fans attending, it was easier to meet new people with similar interests and have a chance of remembering them at the next convention. At large conventions it's very easy for new faces and names to become a blur over two or three days.

The invited guests were Brian Croucher and Jean Lorrah. Unfortunately, about three weeks prior to the convention, Croucher got some work and so was unable to attend. Despite his absence, the Brian Croucher Memorial Invitational Gaudy Shorts Competition (so named because of Brian's fondness for, shall we say, colorful attire) went on Saturday morning. The five entrants wore outfits ranging from mildly colorful to truly garish. The winning outfit was a pair of neon cranberry red shorts covered with bright orange rectangles, and a dark purplish-red shirt with matching socks. Each entrant was awarded a pair of neon socks — and most surprisingly, the winner's prize matched her shorts.

The concom cancelled one of the Friday night games due to a perceived lack of in crest among the attendees, which actually turned out to be miscommunitcation. But a small group of fans staged an impromptu rebellion (appropriately enough—ed.) and decided to play the game "What's My Fannish Line?" anyway.

The art show contained many fine pictures, most of which did not go to the art auction, either going for the minimum bid or the after-auction price. The items that went to auction brought fairly good prices. Only two items were offered for the charity auction, an autographed first edition of Jean Lorrah's Savage Empire which went for $65, and a rehearsal script from Terminal, autographed by Michael Keating, Paul Darrow,Peer Tuddenham and Terry Nation. After fierce bidding, it finally went for $225. (I don't know if the losing bidders were angry at themselves for not purchasing the script from the orphan zine table for $65; if I were interested in it, I would have been.)

The Federation Follies were quite enjoyable, including visits from Judge Harry Stone, much changed after his visit to the USS Enterprise, Christine from Phantom of the Opera, and a visit from Krueger Klaus, with a few helpful Christmas shopping hints.

All in all, I enjoyed Rebellion '90. I do hope that Blake's Several is not going to be put off doing another one next year because of this year's small turnout. The convention was well organized and well run, and I would like to attend another. [2]