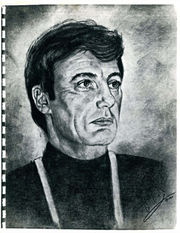 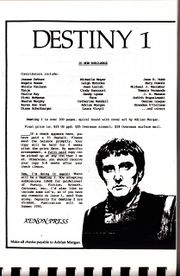 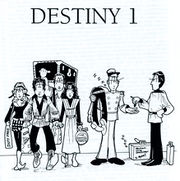 title page. A fan in 2016 said: "Title page to Destiny 1... And the cartoon is, of course, by Leah Rosenthal. I have accepted that every third to fifth fanzine I read is going to contain something by her, which is AWESOME, because I love her stuff." [1]

The zine was delayed greatly by the circumstances of The Blake's 7 War. See the "Publishertorial."

This long-awaiting genuine from XENON PRESS is being published by Ashton Press. Price: $19. I you have previously paid for this zine you must do the following: 1) send proof of payment (canceled checks, etc) 2) send payment of #4 to make up the difference in the price. Please note: Ashton Press had not received a dime of any money you may have previously paid. Orders without the extra $4 enclosed will NOT BE HONORED.

The editorial was likely written quite a bit before the zine was printed and before certain rifts between, and among, some of its creators.

Well, here I am again, one month after writing one of these for Different Destinies 1. Hey, how did a fun-loving, lazy Delta like me ever get himself into this mess? Adrian... Adrian? Typical bloody Alphas. Off doing something totally inconsequential like working their mundane job, leaving the Delta to do the editorial. (Heh, heh.)

With any luck this zine is appearing at Scorpio VII. More likely, it is a little after. When paying the rent wars with paying the printer, rent has to win. Life intrudes.

We've got a wide variety of stories here for you. The poem "we seven, we one" was by someone Adrian met at work because he wears a Blake's 7 pin. "Comes Now The Power" is connected to another of Vicki's stories in Emily McEwan's zine, Power. "Homecoming" is a sequel to our story, "Mutoid," but set in an alternate universe to our Uncertain Alliances series. (Yes, UA will be out soon... life intruded again.) Be forewarned though, a couple of the stories are pretty grim; but often those are the best--the stories you hate to love. There is a sequel planned to "The Master Of Illusion" and it will be in Destiny 2. There's relief, too--humorous poems and filks, stories and cartoons.

Cartoons? The one on the back of this page was something Leah sent me after a bit of excess at the Gambit art auction (excess at an auction--moi?) Adrian was explaining to her that there were four things that would automatically make me go bid-crazy (only four?) at an auction--Bizarro, Hellhound, post-Gauda Prime Blake, and Avon with blood on his hands. (Shrug. Can I help it? Bizarro is irresistible and Hellhound is my addiction...) gave the idea a twist, and well... you see the result.

Yes, there will be a Destiny 2. So send in you contributions, pre-orders, and letters of comment. Look for it to be ready sometime summer of '90.

Welcome, at long last, to the first (and probably the only) issue of DESTINY!!! Believe me, I know just how long most of you have been waiting for the appearance of this zine...because I was waiting right along with the rest of you.

I think some background is in order here, if only to satisfy the curiosity of the general readership not "in the know."

In 1989, Brendan O'Cullane, under the auspices of XENON PRESS, and in partnership with Adrian Morgan, intended to publish a zine called DESTINY. During the early part of that year, Brendan did put out an adult issue, DIFFERENT DESTINIES (now available from ASHTON PRESS). Although Brendan had the best of intentions and had plenty of material in hand to publish the zine, real life intruded. Around the time in question, the great "Controversy" was under way, during which time Brendan and Adrian were subjected to persecution by a West Coast B7 zine editor, an actor, a producer and numerous other people...all this in spite of the fact that Brendan and Adrian had both maintained that they wanted to remain "neutral." I also understand that Brendan was heavily involved in a Chicago-area B7 club and there were stresses and problems on that front. Brendan and Adrian were also facing personal and financial problems.

As a result, DESTINY did not see print when intended.

Although Brendan always intended to print the zine as soon as feasible, time stretched out. In April of 1990, I made Brendan and Adrian an offer: I would publish both DIFFERENT DESTINIES and DESTINY for them and would make an attempt to fill the back orders they already had. Since they could not give me any of the money already collected (it was already spent) I was to take all proceeds from the sale of these zines in the hopes of eventually breaking even. Around June of 1990, I finally received the completed masters of DIFFERENT DESTINIES and began trying to fill the back orders. To date, I have yet to break even on this zine, but I have managed to provide most fans with the copies they paid Adrian for at no extra expense to them. DESTINY was a different story. Brendan maintained the masters were close to finished.

I have been told, after the fact, that some of the contributors herein wanted their work withdrawn. Sorry. No one told me and I'm not taking the rap no more, no how.

Here is the zine. It's cost me a bundle in time, expense, worry, and money. I hope you enjoy it. If you do, please send letters of comment. If you don't, I'm sorry you had to wait so long only to be disappointed, but I don't want to hear about it.

My LoC! Finally! Destiny: "The Final Gift" -- unusual to see a short piece by Sheila Paulson, but I liked it. My favorite line was"...hindsight is a bitter gift..."

"Acceptance" -- Blake's role as mediator was a good point. I always wanted to know how Jenna got over her initial mistrust of Cally.

"Booked" - whimsical; it was good to see something that doesn't want to be taken seriously.

"The Masters of Illusion" - marvelous. Several levels, revealed one by one. TeaIjerker, but in a believable way - except for the amputation story, which might have been Avon fabricating, thus making it worse. Creepy, creepy ending.

"The Examined Life" also marvelous, especially when I learned the whole thing took place in Blake's mind. Wish I could hear the author comment on it.