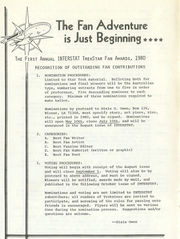 announcement for the first year, printed in Interstat #43

The TrekStar Awards were awards given to fanzine fan fiction writers and artists in Star Trek fandom. They were selected by the readers of the letterzine Interstat.

Like the Fan Q, the award is given to a work created the previous year -- example, the 1981 award was for work created in 1980.

The idea came from Dixie Owen who noted that the FanQ Awards nominations ballot was showing fewer Star Trek entries. [1]

Many die-hard Trek fen have watched sadly and with much dismay year after year as the highly regarded ST Fan Quality Awards (known as Fan Q's, and associated with the big Kalamazoo/Lansing, Michigan fandon) have been diluted to include fringe and comix fandoms. Presently they cover every area—SW, Man From Atlantis, Flash Gordon, Dracula, Superman, Alien, etc., and Trek has pretty well been lost in the shuffle; the awards went to fandoms other than ST the last couple of years. It's high time we got back to basics with Trek-only choices, perhaps the Trek Star Award for Best Zine, Best Editor, Best Writer, Best Artist, Best Humor, etc.? It would be even nicer if a regularly appearing zine like INTERSTAT would sponsor these, dedicated as it is to Trekdom— set up rules, deadlines, and ask for nominations/votes on postcards, maybe. Not necessarily limited to subscriber participation, of course, since the widest possible spectrum of fen would be in the best interests of the cause. [The editor interjects Interstat would print rules and such, but that Dixie would have to coordinate these awards.] [2]

Its Place in History

The TrekStar Awards were created when tensions were high regarding the new existence of media fandoms for things other than Star Trek.

Star Wars was the second big media to hit the ground, and fandoms for Starsky & Hutch, Blake's Seven, and many other shows were attracting attention from Trek fans, as well as fans who weren't Trek fans at all. Many Trek fans felt these new fandoms were dangerous competition in terms of attention and focus; there was much discussion of these fannish loyalties in letterzines.

Another off-shoot of the shifting face of media fandom was the Media Fan Fund, something that was first created as the "Star Trek Fan Fund" a few years earlier. Much of the controversy and discussion about what it meant to be a fan at this time centered around the TrekStar Awards, the Media Fan Fund, and MediaWest*Con.

For much more discussion regarding these topics, see Interstat during this time. 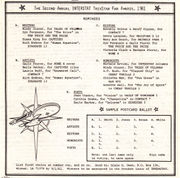 ballot for first awards, printed in Interstat, click to read

From the awards organizer:

ACCOMPANING NOTES FOR TrekStar '81 AWARDS: Thanks to all the participants in the TrekStar '81 Awards, both voters  and nominees. We did a bigger business this year than last, and nearly  everyone observed the rules. One final ballot had to be disqualified for  being late, and one voter signed only her first name (but fortunately, she  had sent a nomination also which was an exact handwriting match). As usual,  not all voters voted in all categories, the Poet being the one most shunned, either from lack of interest or unfamiliarity with the ballot listings. One honest fan refused to vote for a first place poet at all (but did for 2nd  and 3rd), saying, "Any poems not about Spock and/or Kirk would place first  in my heart." Voting totals were weighted, as last year, by giving a first  place nominee the top number of entries in that class: for instance, each  #1 vote Diana King got gave her a 4, with each #2 a 3 and so on. So every one got some credit for each choice. I added and re-added several ways,  since some of these were very close, and am satisfied that the totals re flect the choices of the voters. It was indeed easier to do this year, and  I owe this to your cooperation in rule-following. Congratulations to the  five winners, who have been notified by phone, and your award plaques will  forthcoming. [3] 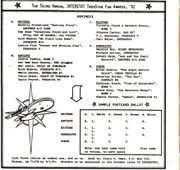 ballot for the third awards, printed in Interstat #70, click to read

Reactions and Reviews Regarding Its Proposal and First Incarnation

[Dixie O's] call for a new set of awards for ST zines/fans only brought to mind a similar brouhaha in SF fandom a few years ago. Some disgruntled fans, upset because Hugos no longer went to real fanzines but to semi-prozines and even fringe-zines, decided to set up their own awards, the Faans. At the time, they seemed full of sour grapes and rather childish, announcing that the Hugos no longer had any meaning, these fans were the last bastion of Tru-fandom, and other similarly apocalyptic decrees. The irony: the immediate cause of their upset was the nomination of two ST writers for the Best Writer Hugo. Her Hugo had no meaning, said the winner later, because she had won it against Trekkies, not against real fan writers. Let's not start that sort of silliness in media fandom. True, the Fan Q awards started as Trek awards, but at the time there was no other media fandom. As Trek fandom expanded to embrace the other media, so should these awards; like it or not. Trek has metamorphosed into media. Most of the media fans are also Trek fans, and a good many people I have known for years in Trek fandom are also participants in wider media fandom. It makes sense to have one set of awards to cover all these fandoms, and it makes sense for these awards to be separate from the SF Hugos or Faans. All media fandoms have similar standards of quality and similar conventions in writing, art, and zines... When fans vote for the Fan Q awards, they are not judging ST against SW, but judging both against standards that apply to both; there may be bloc voting (ST fans voting for ST material, SW fans voting for SW material, and so on), but that happens in any case — it was widely believed in SF fandom that bloc voting was the reason that two ST fans were nominated for Best Fan Writer in 1974, and it's probably true. Besides, the more awards there are, the less validity any award has, and the more the newer awards appear self-serving. [4]