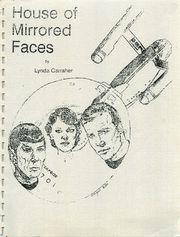 one version of the cover (the edition published by the author?), artist is Christine Myers 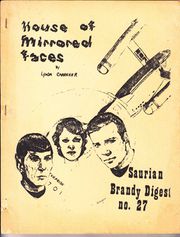 another version of the cover, the Saurian Brandy Digest edition, artist is Christine Myers

Summary: "The arranged marriage between Spock and Lara Merritt, daughter of Earth's ambassador to Vulcan, was strained at best, and it didn't help that Lara was beginning to be irresistibly attracted to James Kirk. But bigger things are brewing in the Federation and Spock discovers the reason behind this strange alliance."

Another summary: "Spock knew, from the moment it was suggested, that his marriage to the daughter of Earth's ambassador to Vulcan would change his life. He accepted the union as a political and personal necessity. But could he accept Lara Merritt as his wife, in human terms as well as Vulcan?"

See Saurian Brandy Digest #27 for other art in this zine; the versions in those issues differ in that they are mimeo-ed and darker, and in the case of Spock and the large bird, presented as a two-page spread, rather than on one page.

This version of the novel is much harder to find than the later reprints. It also has more of a nostalgic feel to read it from these old Saurian Brandy Digests on their vintage “manilla” paper… Something about that old paper really brings back memories of earlier times! I highly recommend this version over the later reprints for that reason... [2]