The album delves into space exploration and general science fiction themes with a few Star Trek songs tossed in. It was later combined with "Folk Songs For Folk Who Ain't Even Been Yet" and re-released as "Folk Songs for Solar Sailors."

It had an accompanying songbook published by Bandersnatchi Press.

SOLAR SAILORS, the second album by Leslie Fish and the Dehorn Crew, has recently been pressed. If you've never had the joy of hearing Leslie's songs, you're in for a real treat. Whether you're a Trekfan, an SF fan, or simply a good music fan, you will enjoy this unusual album. Lyrics, arrangements, and instrumentation are out of this world —- in more ways than one. This is the kind of music you might hope to hear in a 22nd-century coffeehouse... or maybe in a spaceport bar.

The aloum has a futuristic cover by fan artists Gordon Carleton and Clyde Jones, and includes a booklet with lyrics and background information on the songs and singers. An order blank is provided below. 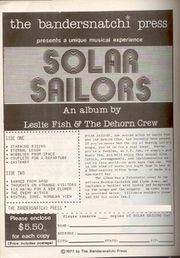 flyer in the back of Paradise, click to read

I first ran across Leslie Fish in the spring of 1976 when I was dragged to a small, local Star Trek convention by Carol Shuttleworth. Since I was at that time a diehard science fiction fan, with the typical snobbish attitude toward "Trekkies". I really didn't expect to enjoy myself very much. All of the fans there were strangers, and kept talking about things I had never heard about--you see, I had never even seen most of the episodes of Trek, and so I felt rather out of place. That is, until Leslie started to play.

Maybe I should explain at this point that I have been a fan of science fiction folk songs -"filks" - for as long as I have been involved in fandom. I've become rather infamous in fannish circles as "the guy with the tape deck", since I have this obsession with quality recordings and tend to drag my huge cassette deck to every convention. Although I sometimes think it's more trouble than it's worth. I've managed to get some pretty interesting material on tape over the years. So I was well-primed for the day I first heard Leslie. Her music wiped me out completely; she was the most professional filker I'd ever heard. The fact that she wrote all of her own material made it all the more exciting. I got up the courage to tell this amazing woman that I liked her material. She smiled, as only Leslie Fish can smile. We promised to keep in touch. I called her a couple of times when I was passing through Chicago (not often, since I was going to school in Columbus. Ohio at the time), we met again at the Chicago science fiction convention, WindyCon, in October. I hung around Leslie, mainly because she looked a little lonely, and because I had by that time become a "groupie". We quickly became friends, especially after she rescued me from a dead battery by offering to put me up until I could get a new one. I met her friends Mary Frohman and Robin Oye. They entertained me until the wee hours of the morning with their songs. Although I had spent hours on end listening to their first album while recovering from an accident. I was still amazed at how fresh everything sounded, even things I had heard countless times before. I sat fascinated while Leslie said. "I have an idea." then proceeded to compose "Starwind Rising" right before my eyes -- in less than twenty minutes- The seeds of an idea for a second album began to form.

I went back to Columbus to start work on my first project, a book of Trek songs called THE COMPLETE TREKFILKER. Since Leslie's songs made up a large part of the material, we kept in close touch. I'm not sure just when the idea to do the record came up; we're convinced it just decided to happen all by itself. I remembered passing the recording studio at Ohio State, and stopped in to meet Ed Thompson to talk about the possibility of doing an album there. Ed was excited about the idea, he was a Trekfan himself, and the studio had never been used for an album before. He was itching to try it out. We made all of the arrangements, and on April 11th we had a 10-hour marathon recording session (delayed somewhat by The Attack Of The Pizza-And-3.2-Beer Monster from the night before). Once we got there, though, things went smoothly. I decided to call the album SOLAR SAILORS after my friend Diana Stahl showed me an article on solar sailing research being done by NASA; I couldn't think of a more appropriate name for the album.

You hold the results in your hands. I hope you enjoy hearing SOLAR SAILORS as much as I did making it.

This album is probably the best music going anywhere for the money. It has pathos, conviction, humor, and a fine sense of the intrinsic worth of the human being. This last theme is firmly stated at the outset, in “Starwind Rising”, an answer to those who contend that humans are too aggressive for the stars. The melody, like the lyrics, are fierce and defiant; both are given added force by Fish’s somewhat rough edged voice. Much the same sense invests Mary Frohman's “Thoughts on Strange Visitors”, in which an alien herdsman yearns to follow the spacefaring Terrans; and ‘Neutral Zone, Romulan View”, a record of the fears and speculations of a truly warlike species. The stern churchly melody contrasts with the fast Middle Eastern rhythm of the finger cymbals to give a sound that is not only satisfyingly exotic, but suggestive of confusion, a mind torn two ways. “Castaway” plays the instruments off against each other in a similar fashion. The starkly simple words are set to a plaintive minor key melody reminiscent of medieval music, above which the free—floating arpeggios of the jazz flute spin an evocative tension. Like “Starwind”, this piece makes excellent use of the echo effect. “Wobblies from Space” is a lively account of the unionization of the E, comedy with a cutting edge. “Banned from Argo”, on the other hand, is just good dirty fun, everything you always wanted to know about R&R and more. Fish’s voice takes on an uncharacteristic sweetness in “Eternal Loser”, a sad and ironic chronicle of Kirk’s ladies loved and lost. “The Enemy Within” is an effective commentary on the episode of the same name, though it stirs neither the foot nor the mind as do some of the other Oriental music. “Six Haiku for a New Flower” doesn’t work; can’t, given Western instruments and a scale restricted to half—tones. Considered simply on its own without preconceptions, though, it’s a haunting reflection on the contradictions in Sulu’s life.

The album’s only failure is “Couplets for a Departure”, a song for McCoy whose melodic line is just too simple to bear this much repetition. Solar Sailors. At 90% good—to—excellent, stands Sturgeon's Law on its head. Be good to yourself. Buy it. [1]

"This is the second album of Leslie Fish filksongs and is as good as her first, if not better. Most of the songs definitely bear her mark; there are three or four that are musically very similar to each other. One or two of the songs don't make it 'Castaway' and 'Six Haiku for a New Flower' (the latter did not sound oriental enough.) The album features two rather outrageously funny songs, 'Wobblies from Space' (what would happen if the Enterprise were unionized) and ' Banned from Argo' (this is Starfleet's finest?? I wouldn't want them to visit me on shoreleave.) The two most powerful songs are 'Starwind Rising' (which she played perhaps a touch too fast -- Leslie almost misses her own lines -- and the structure is a little odd with the refrain jumping in on the end of the last verse line.) and 'Neutral Zone' which to me was very haunting and very effective -- the addition of Laurie Huff's finger cymbals does add the right alien touch.

The special treat instrument-wise on the album is Robin Oye, who has since moved to California -- he plays both mandolin, as he did on the first album, and a jazz flute, which, as Steve Reubart, the producer of the record, says, really "makes" some of the arrangements. I highly recommend this album. The record comes with a little booklet explaining how it was done, who the people are, and provides the words to all the songs, something I appreciate greatly." [2]

If you like filk (fannish folk songs), you've got to love Solar Sailors. I love filk, and this album put me in heaven. When I first got it, I was furious as I had only about five minutes before I had to go to class. Fortunately, the record comes with a book of lyrics which I read as I walked. One song really caught my attention, "Banned from Argo." It tells a great story of the Big E crew on a rowdy shore leave, and I've never read a better shore leave story. When I heard the music with it -- it's just fantastic. Before long my suitemates all knew the lyrics, and they, non-ST, non-SF fans, enjoyed it.

In all honesty, it was the only song I fell in love with at first sight. I might have done the same with "Wobblies From Space" If I hadn't heard it before on a tape from a con. But I'd already fallen in love with it then. It's another funny story of a union man who takes over the Enterprise.

As I listened to the album a few times, I learned the other songs and came to appreciate them. The title cut, "Starwing Rising." is an intriguing piece of warning to others of Earth unbound, free to spread throughout the universe. If you're like me and get down sometimes about being planet bound, you'll identify with "Thoughts on Strange Visitors." And if you are a Romulan fan, or at least interested in the Romulans, "Neutral Zone, Romulan View" will turn you on.

As to the rest, there's two Kirk songs that are quite interesting, a McCoy song that would be awful due to the repetitive melody if it weren't for the superb instrumentation, a Sulu song, "Six Haiku for a New Flower," that's excellent, and one "Castaway" that's about just that, but isn't saved by the music.

As for the quality in general, the only thing that's fannish about the record is the content of the songs. The singing, song writing, and instrumentation are all pro quality — most impressive. I'm a person with little money for zines or records, although I love both, and when I say that the $5.50 I spent on Solar Sailors was well worth it, you know I enjoyed the record. [3]

Eternal Loser, a fanvid, was created based on the song from Solar Sailors.