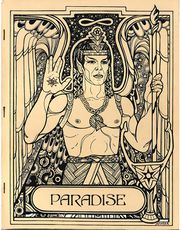 back cover by Monica Miller

There were 500 copies printed.

It is a sister zine to The Other Side of Paradise issue #3, and in fact originally, the two zines could only be purchased together.

"A long time ago in a galaxy far, far away..." Or, more conventionally, "Once upon a time..." there was a 'zine called TOSOP. It was a good 'zine, with many nice stories and pretty pictures. The first two issues were relatively easy to produce--a few problems, like cats in the stencils, but nothing serious. But when it came to the third issue (what was that about "lucky number three"?), all of a sudden the world conspired against it. Things were going fairly smoothly around the date it was due to be published; a few contributors were late, so it looked as tho' it would be delayed a couple of months, that's all. Ah, how trusting we were! Things started happening. Personal problems, at first—lost and/or quit jobs and the like. Then, around Christmastime came the delightful news that a certain American institution which shall remain nameless had managed to lose the entire typed galley for the 'zine. Not too bad—the typist was willing to re-type, and a month or two more of delay was all that was anticipated. Then came a much worse blow—six drawings by artist Alice Jones were also lost by the same ineffable institution. Hair was pulled. Tears were shed. Tracers were sent, but of course it was to no avail. Alice, bless her heart, offered to re-draw four of the drawings (a tortuous task, as any artist knows). Rapture. Another several months' delay. The typist has by this time finished re-typing the 'zine, bandaged her fingers, and cautiously sent half of the stories via the alternate delivery system, re-knowned for its relative efficiency. They arrive safely. Joy. The other stories are sent. They do not arrive. Tracers are sent. They do not arrive. The editors are nearly bald from hairpulling. Phone calls are made. Editors come to the conclusion they will have to re-type the second half of the stories themselves. With the help of a roommate and friends, this is done. Meanwhile, the aforementioned artist is working her fingers to the bone. Finally, at long last, everything is together, except the artwork. Will it arrive safely this time? We don't know. If there are half-tones in this 'zine, then it did.

Well, folks, now you know why TOSOP #3 is so very late. It's been some thing of a nightmare. We've really had difficulty believing it ourselves. Thank you, all of you, for being so patient—we appreciate it. So, now that this issue is finally in print, you ask if there will be a TOSOP #4? We don't know. We've stated elsewhere that there would not be, but then a lot of wonderful people promised us stories and also complained about its demise, so we began to waver. There may well be a TOSOP #4, but it will be under considerably different conditions than the last three issues. For one thing, I (Signe) will not be a full co-editor. One of the few good things to happen in the last few months is that I got an excellent full-time job as a Technical Illustrator. It is enjoyable work, but it does take a lot of time, and if I am to have any time to do ST artwork, not to mention all the other subjects my fingers are itching to draw, then I simply cannot edit two fan zines. On top of which, I have kind of had the enthusiasm beaten out of me by the last few months. If TOSOP lasts long enough, perhaps I'll be back someday. But in the meantime, if there is a TOSOP #4, Amy will be the editor, and I will merely help her as much as I can. Whether or not this happens at all will depend on the quantity—and quality—of the submissions received. All submissions should be sent to Amy. Please do not send any money for TOSOP #4—send a SASE to Amy [address redacted] and when we know what is going to happen, and the price, she'll let you know. One thing for sure, TOSOP #4 will not be late—because there will be no deadline or publishing date. If and when all the material is in, it will be published. Another consequence of all the problems is that my other 'zine, THE HOLMESIAN FEDERATION, has also been greatly delayed. *sigh* For those of you who have ordered that, it will be out as soon as I can get it typed. All the stories are in, but I still have to illustrate most of them. It will be out, tho'! Let's see, what else? There is no D. T. Steiner story this issue. See last ish for the reasons....

A sample of the extensive interior art:

I'm going to rave about artwork. Clare Bells' unicorns are charming, and as I have a fondness for anything mediaeval, I appreciated Signe's 'Medieval Trek' tremendously. This time, Alice Jones outdoes herself, but I admit I have a partiality for her work. And Leslie Fish's 'Close Encounters' are again, clever, well-done, and amusing. Can you believe all this praise for artwork is coming from a writer? The stories are more varied than in TOS: from 'Spock's Apoplexy' by Melanie R, with deals with Spock's decision to leave Star Fleet, to 'Which Truth.' by Elizabeth Carrie, which is an interesting attempt to show a Vulcan's prejudices against a half-breed, and through to 'Kenasis' by Eileen Ro, which is the sequel to 'T'Uriamne's Victory.' Eileen, I'm very glad you wrote it. I did not feel her victory was complete. There is something here for everyone -- and for almost every taste. I'm not going to say anything more about the stories, except tht you must read them. If I even attempted to go into detail, Anne would have to put out a special edition of ROS containing just this review. I WILL mention the poetry (e.g. 'Christine's Joy' and 'Joanna') is also exceptional. All in all, a very good read. Buy.[1]