From Fanlore
(Redirected from The Universes in Science Fiction)
Jump to: navigation, search

Universes in Science Fiction is an anthology of articles and fiction edited by Anji Valenza and Germaine Best. They were both published in 1976. The zines are about nine Science Fiction Universes, their scientific origins and representative fiction. 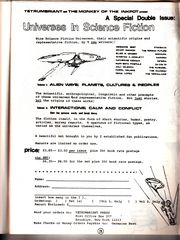 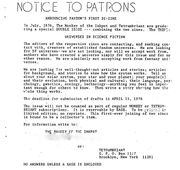 This zine is mentioned in Writers in Fandom: The Fanzine Scene.

photocopy of the cover of issue #1

Universes in Science Fiction 1 was published in August 1976 and contains 176 pages and has the subtitle: "Alien Ways: Planets, Cultures & People." It is non-fiction about world-building 'non-fiction' in the Star Trek universe. It was edited by Anji Valenza.

From the forward: "The Universes appearing herein appeared here because their authors volunteered them. I know that there are a couple of people who were leary [sic] of doing this at first - the reason being that there is a tendency in fandom for "free-lance" writers to pick up other people's universes and begin writing stories about for/about them, often without the original [a]authors' consent or even knowledge. Let this be a word to the wize [sic]: All the universes contained herein are covered under legal copyright; unauthorized writers for these universes will be dealt with accordingly."

Universes in Science Fiction 2 was published in December 1976 and contains 160 pages. It has the subtitle: "Interactions: Calm & Conflict" and are stories based on the world-building of from the first issue.

front cover of the issue #2, Anji Valenza
A note about the editing of volume 2 -- While issue #1 was always intended to be edited and published by Anji Valenza, Germaine Best had planned to do all of the work on Vol. 2. But when Germaine became unable to work on the zine, Fern Marder and Carol Walske stepped in to assist:

The zine "...largely came out of our then new NYC apartment. We were kind of the "fix it" people for a while -- if you got stuck with a zine in trouble, you could come to us for a rescue (either we would help, or we would know someone who could)."[1]

From the editorial in issue #2:

In volume one of Universes In Science Fiction you were given the technical data behind the universes of the authors featured here. In many cases, authors with volumes of stories based on their worlds were forced to stop and re-think, along more scientific lines, the underlying structure of their universes for Ms Valenza its editor.

In volume two, this issue, these basics were put together to form the crux of the process of creation, the story. While it is true that science fiction must have a basis in some relm [sic] of science in order to be differentiated from fantasy, the full purpose of all that research is to create a viable story of interest and appeal to the reader. It was my intention, in initiating this project, to show the two halves of the process of science fiction writing, the analytical and the creative. The former is the portion not usually seen. The latter is what we, the readers, are used to dealing with. It is my hope that perhaps this will put science fiction in its proper perspective.

Here then, are the end products, the representations of those universes so well-defined in volume one. They include many forms of literature, from prose to poetry, legend to 'fact'. All based upon some basic idea or inspiration. I sincerely hope that these authors continue in their efforts, expand and grow, as all have great potential. I thank them for their patience as this compilation has been a long and laborious task. Perhaps, some day, these universes may be accepted into the professional realm. [sic]

I just plowed through Universes in Science Fiction, or at least as much of it as my poor non-scientist's brain could absorb. It's a helluva work, and represents a tremendous amount of time and effort on the part of Carol Walske, Anji Valenza, et al. BUT -- I am vaguely upset by the assumption that when one person has put all that effort into a Star-Trek oriented civilization, that person then owns it. I have no quarrel with the gals and guys who create their OWN universes (like Anji's 'Kaillaieu'). What bugs me is when someone takes over a portion of the ST universe, stakes a claim on it, and says in effect: 'This is the way it is, forever, do not try to contradict me.' Is Carol Walske's the only vision of the Klingon Empire to be accepted by fandom? Are Jackie Lichtenberg's the only Vulcans? Does Anne Elizabeth Zeek have the sole claim to the Romulans? The stories which these ladies have written are valid and readable -- but is this the ONLY interpretation? In my opinion -- and this is going to start a major letterwar -- the true, sole, and ONLY person who can judge what is and is not so in the Star Trek Universe is the man who made it, Gene Roddenberry. He gave explicit instructions, via the scripts and the ST writers' handbook as to how his characters should be treated. Some of the minor characters were left with sketchy outlines, but the main characters and Federation civilizations were made very clear. Perhaps we are getting too far away from the original intentions of the ST characters and the Universe when we 'improve' or re-interpret. I suggest that either we use some of that well-known Federation tolerance for other peoples' ideas, and admit that there may be more than one way to account for the doings of a group of beings, or that we re-read the scripts and the Writers' Guide more closely. Or else, quit playing 'Let's Pretend,' and admit that we're writing straight science fiction, and make up some new names for our characters... [2]