What Henoch Did is a Star Trek: TOS story by Paula Smith. 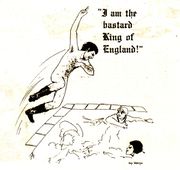 art from "Menagerie" #9, by Anji Valenza 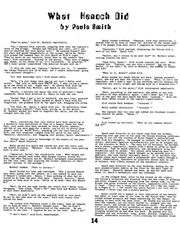 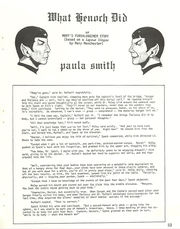 It was also read aloud at a number of conventions, two of which were SaltCon and Wondaycon.

A fan in Halkan Council #14 called it a "delightful (ahem) raunchy tale."

Right on the heels of [the previous story in the zine] however, is 'What Henoch Did,' which is getting a bit old by now. It first was read by a number of people as an underground story and given a dramatic airing by Paula herself at Wondaycon #5 in Detroit. Later, it appeared in Interphase #2 and at least one other zine I know of, but I'll be damned if the story still isn't funny on the 6th or 7th readings. The major incentive to read it again in this issue is the marvelous illos by Gordon Carleton that accompany it. [1]

UPON GAZING AT THE INDEX OF INTERPHASE II

When I see who wrote "What Henoch Did"
I need to read no more;
Past encounters say it will be
Filled with blood and gore.

He'll prowl the ship until he finds
Uhura in fine dishabille;
His eyes light up, his cock alert
As he prepares to cop a feel.

But lovely U. her lesson learned
When "Mirror, Mirror" was her world;
A dagger sharp sleeps by her thigh,
And home it drove as quick she whirled.

Straight thru Spock's heart and up it gouged,
Green blood spurting here and there--
Nerves and tissues screamed aloud
As he pawed the thickening air.

And he stoically bled and bled and suffered and

I had already read "What Henoch Did" in INTERPHASE #2, and had chortled and gleeped through it, and then composed final limericks, I thought I'd send said same along to you... I'd love to see Paula write some ore of those outlandish lines.

There once was a Vulcan named Spock
Who made little use of his cock.
Till Henoch one day
Showed yeoman the way
That that green-blooded organ could rock. [3]

...concerning "What Henoch Did," I was laughing uproariously each time I read it--while it had hilarious situations, the characters were accurately reflected in their speaking, thinking, and actions. This is good satire? humor? perversion? Anyway, I liked it. [4]

The Carleton drawings added a lot to "What Henoch Did"--I read it through so fast the first time, I missed the fact that Spocko was wandering around in the buff. The second illo had Parham looking a bit like a black Faulwell...or maybe it was just the expression on her face. (You don't suppose--naw, couldn't be.)

When I saw the "Henoch" story I decided you were making issue 9 a sort of comic relief from 7/8. [5]

I just received MENAGERIE #9, the last issue of my subscription, and I will not be renewing it. I took exception to some things in #5 and #7/8 was good, but #9 was very disappointing. In her editorial Paula asks why we can't ask more of ourselves literature wise and whv we waste time and money on garbage (she used another word). Why then, did she go on to write trash like What Henoch Did? She probably intended it to be a "fun" story, but this kind of thinking is not only degrading to the basic concept of Star Trek but to anyone who reads it. Why can't Star Trek be fun (Letters from Camp) and clean too? With Paula's talent and ability there shouldn't be a need to resort to this kind of, and I use the word loosly, literature. Come on! Star Trek is great! Fandom is fun! Why not keep it decent too? [6]

This zine has lots of satire, and it is very well done. Good art, Phil Foglio cartoons, news about cons. They use small print to put a lot into 20 pages. [snipped] Menagerie plans to reprint Paula's "What Henoch Did" from Interphase II and I hope they do. It is a delightfully obscene little story. You remember Henoch — we saw him wearing Spock's body, lounging in the doorway with that grin on his face. Well, Henoch was without a body for half a million years, and since Spock's was in such good shape — let's just say he put it to good use. [7]