This zine has a slash sister zine called K/S Relay. 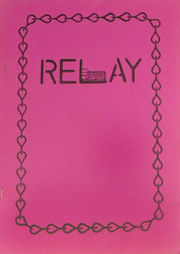 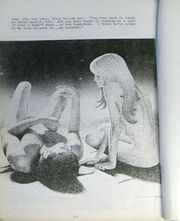 See reactions and reviews for Speculation.

See reactions and reviews for None There Embrace.

See reations and reviews for Encounter in Xanadu. 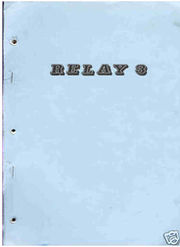 About "A Lesson in Perspective":

About "Dust to Dust":

See reactions and reviews for Dust to Dust.

See reactions and reviews for A Lesson in Perspective.

There are two lengthy stories in Relay 3, both by established American authors.

DUST TO DUST, the second story is set on a slimy, decaying planet, N'braxis. It centres on the quest by Mela Duncan, research scientist, for an apparently shy, elusive creature that, legend suggests, springs to life rom the swamps of the planet. This quest becomes intertwined with the search by Mela and the Enterprise landing party for Jason Philotre, Professor Duncan's research partner and lover.

Gerry Downes sustains the suspense well throughout. The reader, like the search party, gets fleeting impressions of a presence - feels that the solution is within reach - only to have it slip away at the denouement. The theme running through the story is the uncovering of a rather insular, dependent relationship which has developed between Mela and Jason Philotre from their student days. I admit I was rather puzzled as the story progressed as to why it was necessary to print it in Relay (being an 'adult' publication). This is not at all obvious for the first 20 out of 26 pages. However, without giving away too much of the plot, I think it is safe to say that all is revealed thereafter.

I imagine that Gerry Downes is trying to demonstrate - as McCoy says - that it is possible to be 'independent people first and lovers second!' If so, I am not sure she does it to my satisfaction, but this is purely a personal point. At any event, this in no way detracts from the atmosphere generated by the story as a whole.

LESSON IN PERSPECTIVE: If you are looking for a story of thrills and adventure which ends happily ever after. Kirk getting the gal (or Vulcan), then this is not it. The story is set in the period immediately following the body transference with Janice Lester, and is a skillful exploration of Kirk's readjustments to his own self image and sexuality at that time.

There are harrowing encounters with a former lover, Janice herself and, after McCoy's ill advised efforts to help, with an android prostitute. None of them offer Kirk the simple understanding and acceptance of himself as a person, rather than a man, that he craves.

He finally resolves his problems with the aid of middle aged Nurse Sajis Caffrey - not necessarily in the time (and Kirk) honoured fashion!

I find this story makes bitter and unpleasant reading in places. I have read it several times now and still find that the second half has a tendency to drag. This may be because I didn't ever really feel close to the character Sajis Caffrey, who plays a major part at that stage. Although I appreciate that the healing process was necessarily a slow one for Kirk I still feel it was too long in the writing. Nor do I entirely subscribe to the view of Spock being incapable of helping his Captain because of the 'nature' of the problem - but that is a personal bias and can be a subject for discussion.

As it is 'A Lesson In Perspective' is a brave and deeply thought out effort at analysing the possible psychological sequel of such a traumatic event in the very masculine James Kirk's life.

The illustrations are by the excellent. Roo's suffer slightly because of the technical difficulties of printing drawings using her particular style of shading, unlike the illustrations for 'Dust to Dust' by Lee Sullivan which reproduce superbly. Incidentally, I would not advise opening your copy on the train or in any other public place!