Neutral Zone Outpost is a gen Star Trek: TOS anthology of stories, articles and art. It was published by members of the US Navy stationed in at Midway Island.

Neutral Zone Outpost 1 was published in 1976 and contains 32 pages. Joseph W. Partlow 3 is the editor. It has been scanned here. 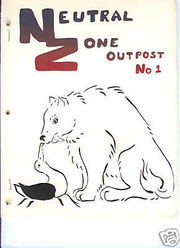 This first issue is a modest little zine with a couple of stories, a poem by Ruth Berman, and several illustrations of Elizabeth Marshall's charming Star Trek animals. The editor of the first issue is Joseph W. Partlow, and he is also the author of the first two stories. 'Let's Trade' is a short humorous space adventure, but not strictly speaking, a ST story. 'It's Only Superstition' is an Enterprise whodunit; who is the vampire that murdered two crewmen? Since one of the suspects is an alien from a planet of vampires, it looks like an open and shut case, but I could be wrong. [1] 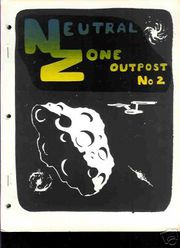 Neutral Zone Outpost 2 was published in August 1976 and contains 62 pages. Elizabeth Marshall is the editor.

The art is by Connie Faddis, Mickie Hyde, and Elizabeth Marshall.

Neutral Zone Outpost 3 was published in April 1977 and contains 44 pages. 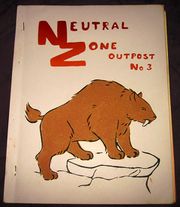 This is the zine that shows what can be accomplished with love, mimeo, and gooney bird guano. Except for the electric green paper, NZO is the most relaxed zine I've read... 'The Birthing Time', an even-for-Faddis surprisingly deep, deceptively simple story. In this, it is like the illo on page 6, which inspired the story. C.L. Moore's science fiction article was short and comprehensible only because five years ago I'd taken Physics 9, and PBS 'Key to the Universe' was on recently. Moore points out the DeBroglie explanation of matter, but neglected the Heisenberg Uncertainly Principle, which is to say, tho energy/matter cannot be created or destroyed over discernible time, it can be created within 4 t, such that [indecipherable], E and t being collateral variables like position and velocity, which... Anyway, back to NZO, for a base on the Rom Neutral Zone, there's a lot of emphasis on things Klingon: a couple of 'travel brochures.' spy-reports, and a short-short. The zine rounds out with a long, quite good mystery story called 'Inheritance,' and everywhere are illos from Marshall. Price a bit steep, but an interesting zine. Content - 4 Graphics - 4 $ Worth - 4. [2]

The art is by Gerry Downes (most of it), Gayle F (one page) and Mars.

NEUTRAL ZONE OUTPOST #4 is another beautiful zine, and I'm sorry to say is the final one in the NZO series. #4 includes lots of lively sehlats, dragons and mythical beasties, by Mars, an ornate dragon by Gayle F, and the remaining art is by Gerry Downes. The short story "The Knight and the Dragon" by Partlow is an entertaining little fable... The first story, "What Dreams May Come" by Gaylen Reiss is just about my favorite kind of ST story -- episode Trek. If they were still filming a weekly TV Show, this would make a marvelous episode -- there is humor, suspense, character growth, and both the Klingons and the Federation learn that 'it's the home team that gets to make the rules'. I did a series of what I hoped would be very dramatic and slightly abstract iillos for this story, since I liked it so well, and I must say I don't think any artist has ever had her work used with more care. The final long story, "Scientific Research" by mille fabricius (which must be a pen name, heaven knows whose) is partly an adventure story and partly a class romance for Uhura and Spock. Well plotted, well developed, and a joy to read. [3]