My Lover, My Hero 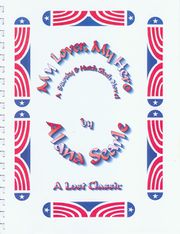 My Lover, My Hero is a slash Starsky and Hutch novel by Alana Searle.

It was published by Flamingo, contains 107 pages, and has no interior art.

In the intro to the fanzine, the editor Flamingo writes:

The fanzine is a reprinting of an earlier novel and two short stories written around 1981. The first story written was 'The Incorruptibles' was produced as a limited edition challenge fanzine and was shared only with contributors and select friends. The novel 'My Lover, My Hero' developed and enriched the first story and that earlier story. After the novel was completed it remained in manuscript form, shared among friends and never published or made generally available to the fandom. Shortly thereafter a follow-up story, 'In The Gym' was published in a small slash letterzine called Hanky Panky. Among some of the earliest works [in Starsky and Hutch fandom] are stories that were handed from fan to fan and never published in any 'official' form. Today, with the Internet and the ease with which fans can instantly publish any writing on fan fiction lists or story archives, it might be hard to imagine fiction that was considered so private, so personal, that it could only be comfortable shared friend to friend... Those of us who are passionate about our fandom are always looking to share our treasures and find new ones. Once I learned of the existence of these rare manuscripts, I sought them out. They were usually found on the collections of long-time fans, the copies faded, worn, and much loved. When someone finally shared their copy of 'My Lover, My Hero' with me, I fell in love with it. Finding the two companion stories was a unexpected bonus. I consider these stories, 'Lost Classics.' These stories are very much in the theme of my Dangerous Lives, Dangerous Visions slash anthologies. The storyline is one of the most unique in the fandom, the topic different and daring. This zine will not be to everyone's taste.

[From October 2, 2003]: Okay, the zines are at the printers so I guess it's safe for me to announce them! Premiering at ZebraCon, two Starsky & Hutch slash novels. [1]

This 108 page zines is a collection of one novel length work and two shorter stories, all in the same universe. The stories were written in the very early '80's, and were handed to friends, or published in small zines with limited circulation. I consider this zine a "lost classic" and am happy to be able to offer it to the fandom in this new edition. When the novel begins Starsky & Hutch have been separated for 3 years. While Starsky was recuperating from Gunther's assassination attempt, Hutch was offered an important position with IA. He told Starsky there was a place for him, too, but Starsky refused to join, not wanting to be part of an organization he hated. Hutch, unable to tell Starsky the real reason he was joining, had no choice but to join without him. Now Starsky is with Narco, but on this morning, three years after the separation, he comes to work to find almost two-thirds of the force has been suspended or is under arrest for corruption. All of this has come about through the work of Commander Hutchinson, the elusive Deputy head of IA. When his old partner shows up, unexpectedly, on his doorstep seeking nothing more than a place of refuge he can trust, Starsky finds he cannot turn his old partner away. Hutch is a shadow of his former self and has clearly worked himself to exhaustion, the heavy responsibility of what he's had to do destroying his health and possibly his mental well-being. In spite of their 3 year separation, Starsky finds it all too easy to dredge up all the old feelings he'd thought dead and buried: the obligation to a trusting partner, as well as the deeply closeted longing Starsky has always had for Hutch. But this isn't the Hutch he fell in love with; this is Commander Hutchinson, a man who's thoroughly investigated every single member of the police force. Has he uncovered Starsky's secret life as a gay man? And why has he returned to his old partner now? Is it only reliance based on trust, or is Hutch looking for more? And can there be a future for these men now? Since they're no longer partners, can Starsky be a part of Hutch's life as his subordinate? No art work. The price for the zine is $10. (Mail orders will be taken *after* Zebracon. I'll make an announcement when I know I have time to handle the orders.) [2]

Another Description of the Zine: 2004

Flamingo, the zine's publisher, described the zine as it was one that was eligible for some awards (FanQ, Sizzler, Screwz}:

This novel was first written around 1981 shortly after the show finished its first run. It originally consisted of a novel-length story which was never actually published, just given to friends in manuscript form and two shorter stories written in the same universe that were published in extremely limited edition newsletters. All three stories are collected here for the first time as a whole. Starsky comes to work at Parker one morning to find that half the police department is either under arrest or on suspension for corruption. He is one of the few men left and is instantly given a field promotion. He's given little information about this clean sweep of the police department and simply must struggle on to maintain order in a city that now has a much smaller police department. While he isn't told much, he soon finds out that this radical change has been brought about by his former partner, the elusive Commander Hutchinson. Their partnership was broken up shortly after Starsky's shooting by Gunther and the two men have not seen each other in several years. While Starsky was still in the hospital, Hutch was offered a position with IA, largely because of the evidence of vast corruption he uncovered while investigating Gunther. Starsky, however, refused to join him there, not wanting to become a "head hunter" of brother cops. It was a breaking point between them, but Hutch felt he had to do what he could to root out the source of corruption. After the first difficult days of trying to reshape the police department, Starsky is surprised when an exhausted shadow of man, Commander Hutchinson, shows up on his doorstep, looking for just a moment of solace from an old and trusted friend? Can Starsky forget the pain of their separation and put their differences aside for old times sake? Hutch appears to be a shattered man, but he's still the head of IA. Is there a chance that his investigations have revealed Starsky's hidden life as a closeted gay man? More importantly, can Starsky help Hutch recover from the difficult life he's chosen for himself without revealing his powerful desire for the one man he can never have? [3]

This is another "never published" slash novel that was handed from fan to fan. I am immensely pleased that I have been given permission to publish this rareity, along with 2 short stories in the same universe. It is one of the rarest stories, and one of the original "dangerous visions." I love this story and always have for its unique story line and the way it pushes the envelope on where the emotions and needs of these two unique men might take them. This is not a story to appeal to everyone but it's one of my favorites. Look for it at Zcon. Due to the author's wishes, this story will never be on the net, but it will always be in print in a very affordable issue. [4]

The zine story I read a lot is My Lover, My Hero by`Alana Searle. From the zine of the same name. I love the ending to the story. It shows the love that these 2 guys have for each other and what

Starsky would do to show Hutch he is loved. [5]

How many ways are we willing to "see" the guys? If you picture a committed, exclusive relationship, for example, can you ever enjoy a well- written story that has either one showing an interest in another person? Most of us "know what we like" about Starsky and Hutch, or we wouldn't care enough to watch the shows, read the stories and want to talk about what we've found. But, as has been so often mentioned here, different people are looking for and find different things. I expect both men to be competent, take-charge and strong. The obsessed and weird-acting Hutch of DARK NIGHT OF THE SOUL is very far from how I usually see him, but the author made me agree that this is a scenario that could realistically have played out following Starsky's shooting. Neither Starsky nor Hutch acted exactly as I would have expected in MY LOVER, MY HERO, but again, I bought the premise given the circumstances outlined, and enjoyed finding out what happened. I'm finding that my tolerance of what Starsky and Hutch would or would not do relies less on the preconceived ideas I bring to the story, and more on whether they are responding realistically and reasonably intelligently to events. [6]