Dark Night of the Soul

You may be looking for the Highlander zine Dark Side of the Soul. 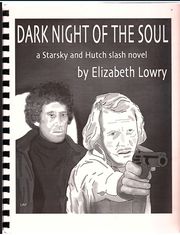 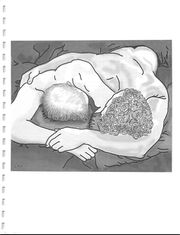 back cover plate by L.A. Pinn

Dark Night of the Soul is a 152-page slash Starsky and Hutch novel by Elizabeth Lowry. It was edited and published by Flamingo.

From the title page: "This zine will eventually be available in this paper format, on CD, on-line as an e-zine, and as downloadable files." And "Elizabeth asks that letters of comment be sent to her friend, Suz, at [email address redacted]. Suz will forward them to the author."

From October 2, 2003: Okay, the zines are at the printers so I guess it's safe for me to announce them! Premiering at ZebraCon, two Starsky & Hutch slash novels. [1]

Dark Night of the Soul by Elizabeth Lowry.

This 150 page novel is a well-plotted, intense psychological thriller! It's after Gunther, and Starsky & Hutch have been assigned to work on a very special task force hunting the sexual serial killer that's plaguing LA. They're hoping that this new assignment will give Starsky a chance to ease back into the job, and give the two of them a chance to get used to working together again. Starsky's near death has changed both of them--can they get find the old partnership magic again? Starsky's chaffing to get right back on the horse, get out in the streets and work the way they've always worked. Hutch is just as determined to make sure Starsky will never be in the line of fire again. Can Starsky cope with the new feelings he's discovered for Hutch, and is there any hope that Hutch will ever be able to forgive himself for not being able to save Starsky from Gunther's assassination attempt? And will they be able to stop this sexual predator by using teamwork and printouts and paperwork trails instead of their usual way? Dark Night of the Soul is the longest work produced by Elizabeth Lowry to date. Elizabeth is well known among zine readers as an outstanding writer known for her unique plots and unusual storylines as well as her excellent characterization of canon characters and original characters both. The zine is further enhanced by a lovely noir-looking b&w hand-drawn cover and an inside back cover produced by L. A. Pinn. The price for the zine is $10. (Mail orders will be taken *after* Zebracon. I'll make an announcement when I know I have time to handle the orders.) [2]

Starsky & Hutch are working on their first important case since Starsky's recovery from Gunther's assassination attempt. They've been assigned to work on an important task force hunting a serial killer who targets men seeking erotic thrills through bondage games. While Starsky has recovered both physically and mentally, Hutch is still coping with the trauma. Hutch is happy with the new assignment and feels it is important because it will help Starsky get used to their new roles as detectives who spend little time on the streets and more time solving crimes through detective work, i.e. desk work. He is determined to keep Starsky safe and out of the line of fire. But Starsky is chaffing at the bit, protesting Hutch's well-meaning attempts to rein him in. The more Hutch tries to exert control, the more Starsky pushes back. Is the conflict between them about to come to a head? And how can Starsky learn to cope with the riskiest thing of all, his new found feelings for Hutch?[3]

Starsky and Hutch are often touted as 'the perfect couple.' Their is a partnership so secure in its commitment that conflict between these men seems impossible. Yet, there was plenty of conflict between them in the show, particularly in the fourth season. The trauma of Starsky's near-death at the end of the series weighed heavily on Hutch. Combine that post-traumatic stress with the partners' first serious assignment Post-Gunther on an important task force, and a dangerous serial killer who preys on men with hidden bondage fetishes. Add it to Starsky's need to prove himself as a cop again, and Hutch's deep-rooted need to keep him out of harm's way, and you've got a recipe for a crisis, and one hell of a story. Originally, we'd hoped to print Dark Night in my first Dangerous Visions anthology. It took me awhile to accept the obvious fact that the story was really too long for an anthology zine, and deserved publication on its own. I love richly developed, heavily plotted novels, so I'm thrilled to be able to bring this one to the fandom.

Hmmm. This is another one of *those* stories. Excellently written, very emotional, but...

Dark Night of the Soul" is a very intriguing story, post SR, mostly from Hutch's point of view, in which Hutch is pretty much obsessed with his responsibility to protect Starsky. This aspect of the story is what made it difficult for me to put it down. But Hutch also is struggling with his sexuality, and he has three very different encounters with three different women, before he figures out with whom he really belongs. The sexual experiences didn't bother me that much, but more so Hutch's insecurity and low self-esteem. His behavior in this area was not the Hutch I think I know. Starsky however was portrayed very well, the case is well presented, and as I said, the writing is excellent. The author's style is indicative of the torment Hutch is suffering, and it is a very emotional story--but one I would have enjoyed a lot more if Hutch were more recognizable to me. [4]

My initial reaction was similar to [B D's] as far as Hutch's characterization was concerned. Hutch's thoughts and actions at the start of the story were so far from the Hutch I expected that my immediate reaction was, "Hutch wouldn't do that!" But as I got into the story, I realized that that was the point: Hutch is very near a total breakdown, so he is NOT acting as he normally would. And I did buy the author's portrayal of how and why he got that way. I'm a OTP advocate at heart, but reading something different from what we usually find in this fandom, where the author supplies convincing evidence for the characters to behave in unexpected ways, is very appealing. Especially when our guys find their way back to each other before the end. [5]

I kept my previous comments simple for the sake of the post and in deference to those who haven t yet read Dark Night of the Soul, but this story is anything but simple. It is one of the most complex pieces of fanfic I've read. The author did convince me that most of Hutch s behavior was warranted by his torment; he was in pretty bad shape--psychologically, emotionally, even physically. But where it failed me was his lack of interaction with, and his behavior toward Starsky. I found myself begging Hutch, right along with Starsky, to please talk to him! Every time I felt they were about to make a breakthrough, Hutch would clam up or walk away. I could have even put up with all of this if the author would have allowed a little more balance. After reading 150 pages of conflict and angst, the reconciliation happened way too smoothly. In Hutch s own thoughts: This should be a knock-down, drag-out, to-the-death struggle. There should be accusations, recriminations, allegations, and counter-claims. He should be apologizing to the extreme! And Starsky should be berating him to the fullest! I agree with Hutch. I thought to myself, That s it? We only get a few pages once Hutch figures out where he belongs, after months of true anguish. I would have gladly read another 150 pages by this skilled author while the two of them worked things out. This is what turned an otherwise excellent story into an acceptable one for me. [6]

I agree with [B] about the ending. It was too smooth, too easily accomplished and still left way to many threads, and emotions, hanging. For me, it need a much better resolution. Although the hope is there that they'll work it out, they really haven't actually done it yet.

I know that there is a sequel, but from the reviews I've seen I don't think it's going to be the ending I'm looking for, either.

I think that's one of the problems I have with a lot of angst fic. I can willingly go through pages and pages of angst with the hope that the author has put the same amount of work in the resolution. Many times, I find that the 'fix up' is only a few pages long. They suddenly come to their senses and all is forgiven. For me, that's when I'm really getting interested! <g>

And it's not just in slash. One that comes to mind in Gen is "Crossroads". Once all the excitement of the story is over in that one, and the guys are reunited, the story just stops. Those kind of endings really frustrate me. [7]

The only problem I had with 'Dark Night of the Soul' is Hutch's major attitude toward sexuality, sex, and appearance. He was written very arrogant about how no one's looks or dress compared to him.

And while I do agree with the author that he'd overreact to Starsky's going back on the force, I didn't like the way she wrote him experimenting with Madame Heather. That was just *so* not Hutch. But I did agree with how he handled Elissa.

Whoever said this was a complex story was correct. This is not one that can be read lightly or quickly. There's mucho angst & depth to it, and while it's not one of my favorites, I will probably turn to it again sometime. [8]

How many ways are we willing to "see" the guys? If you picture a committed, exclusive relationship, for example, can you ever enjoy a well- written story that has either one showing an interest in another person? Most of us "know what we like" about Starsky and Hutch, or we wouldn't care enough to watch the shows, read the stories and want to talk about what we've found. But, as has been so often mentioned here, different people are looking for and find different things. I expect both men to be competent, take-charge and strong. The obsessed and weird-acting Hutch of DARK NIGHT OF THE SOUL is very far from how I usually see him, but the author made me agree that this is a scenario that could realistically have played out following Starsky's shooting. Neither Starsky nor Hutch acted exactly as I would have expected in MY LOVER, MY HERO, but again, I bought the premise given the circumstances outlined, and enjoyed finding out what happened. I'm finding that my tolerance of what Starsky and Hutch would or would not do relies less on the preconceived ideas I bring to the story, and more on whether they are responding realistically and reasonably intelligently to events. [9]