Lynna Bright is a slash and gen fan writer who has been writing since the early 1980s. She was quoted extensively in Textual Poachers. Bright is perhaps best known for her work in Starsky & Hutch fandom, but has also written in Star Trek, West Wing and The Sentinel fandom. 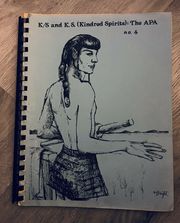 She is credited for creating some of the original fanon surrounding the Sentinel and Guide relationship in Sentinel fandom. Her last credited fannish contribution was in the early 2000s under the name L. Bright when her West Wing story "By My Cry" won a Jed Award in 2001.

Bright has had two zines dedicated to her: Down to Earth and Distant Shores.

It is certainly easy enough to be swept away by Lynna's writing. I certainly have and continue to be every time I pick up one of her splendid works. Her lyricism and use of language may never be matched in fandom.

You might be very interested to know that in the early days of SH fandom, which was pre-net of course, most of the fans had a lot of contact with each other by phone, letters, letterzines, and personal contact (and the occasional con). Zines were few and far between and no one took fanfic for granted because there just wasn't that much of it. So there was always a lot of discussion among fans as they got together to watch eps. I've been told that because there were such strong relationships among the fans, especially among fan writers, it wasn't unusual for them to come to certain "agreements" over character traits. (These days, with the net, most of us work alone in our houses and only find out how others feel about characterization after we've written something and posted it.) Most of the fans perceived Starsky as this lovable child-like teddy bear (a characterization that dismays me) and Hutch as a more aloof, better-educated, blond god of a man. But of course, they encouraged each other in seeing these traits. So the fiction frequently reflects the discussions and agreements they had about these characters. I've been told by several of these original fans that my Starsky is "different" -- because I was never part of these mutual agreements and made my own decisions about Starsky, as most net fans do today.

If some of you have not read Lynna's work, I would discourage you from reading any further so as not spoil the wonder and delight of discovering this fine writer completely on your own. You will not be sorry, I promise you. Her stuff is *wonderful.* Many fans disagree on what is or is not a good story, but I have never heard anyone say they disliked Lynna's work, that it wasn't a wonderful read.

By Lynna's own admission, she didn't give a damn about her plots, she only used it to get the guys together, and once they were together, it was everything she could do to sustain enough interest in the plot to conclude it in any acceptable way. In her story Winter, she essentially destroys the world to get the guys together (now, that's what I call ambition!) and once she does, the plot just kind of withers away. Not that any of us cared. In her best known and best loved work, Murder on San Carmelitas, once the guys are together, the plot nearly disappears until she dredges it up in one last gasp, races through it, concludes it abruptly and ends the book. Not that any of us cared. ;-) And in her last work, Place in the Sun, she could not maintain interest in the plot enough to conclude the story, much to our loss. Being able to read Lynna's writing was valuable enough where things like inadequate plotting or pacing or even endings seemed irrelevant. We just wanted to read it. I was bowled over by the quality of her writing when I first discovered it, and I am still captivated by it whenever I reread any of her work, and I do so frequently.

But, Lynna was very guilty of author intrusion in every story she ever wrote. (Just because a writer is really good, doesn't mean they don't have flaws.) While Lynna never portrayed Starsky as a simple character, and gave him plenty of accord in the course of the plot of a story, he was not her favorite and it is blatantly obvious. In Murder on San Carmelitas, which is the most obvious display of this, she portrays Starsky very much as he was on the show -- a man comfortable in his maleness, very hetero, very strong willed, not a dummy, and not a wimp. He is clearly a man who loves women and who is incredibly uncomfortable among gay men and with homosexuality in general. The thought of two men having sexual relationships makes him incredibly uncomfortable, and this is stipulated by Lynna many times in the book. This is *her* portrayal of him, it is consistent, and it jibes with canon.

However, the *minute* he decides he is in love with the great god Hutch (and to Lynna, Hutch was a golden god, and every passage of her work confirms this) he throws ALL his previous apprehensions away and never looks back. Dazzled by love, Starsky, previously repelled by homosexual relationships, blithely suggests to Hutch that Hutch fuck *him*. "You can fuck me if you want." This is completely out of character for the character Lynna had established. It brought me, and many other Starsky fans, to a screeching halt in the middle of a captivating read. This happened way too fast for the character *she* had established. Hutch is hesitant, but Starsky is ready to go, right then! And when they do do it, Hutch is such a magnificent lover that Starsky, a complete virgin at this sex act who was repelled by it just the day before and who is now having this sex act with a very large male, has NO PHYSICAL PROBLEMS WITH THE ACT, loves every second of it, it is the finest experience of his entire life, and he has now found his calling in life. Why does this happen? Because that is how Lynna felt about Hutch. He is a 10 inch golden god, a love machine, how could anyone not crave to have this man in their body? Craving someone, loving someone enough to surrender to them is one thing, being able to easily physically accommodate them is a whole other story.

Also, read over MOSC and you will see that when Hutch is in a dominant position sexually, we are given a beautiful, lyrical sex scene. When *Starsky* is in the dominant sexual position we are only *told* about the scene afterward, we do not see it, we do not experience it. We are in the scene until it is about to occur, and then the door is shut in our face. Starsky doesn't top Hutch until the very last scene and is it a beautiful, lyrical scene -- no, it is difficult, not lyrical at all, and we're fortunate it's successful at all. Hutch is simply too manly to accept this thing easily.

Lynna had no interest in depicting love scenes where Hutch submitted to Starsky, it simply didn't interest her -- which is why her omission and predilection to prefer Hutch is author intrusion. Yet she respected the partnership and wanted it to be equal, so she tells us these scenes occur, to keep the relationship on an even keel, but she didn't want to write them. It makes her stories unbalanced and for many Starsky fans unsatisfying in that aspect. In her serialized, excellent AU (which had a lot more plot than some of her other stories), we are never shown a love scene where Starsky is dominant, even though it is critical to the plot. An element of that plot was that the Hutch character has been sexually abused as a child and is terrified of being the recipient of the act, and the Starsky character lovingly seduces him out of his fear and shows him how beautiful it can be -- but we are never *shown* this important scene, we are just told about it in a few tossed off sentences.

Now, in spite of this, Lynna's wonderful writing is more than worth reading. I recommend her work to anyone who wants to see wonderful use of language, lyricism in writing, and just get swept up in the romance. It is the best of the best of fanfic. But it's not perfect. Not from a purely writing standard, and especially if you're a Starsky fan. [1]