Extra Touchy Frisky is a Sentinel slash digest-sized anthology. On the cover of most issues: "The All-Sentinel Edition of Frisky Business. The Multimedia Slash Zine. Special Internet Edition: All fiction herein has previously appeared on the internet."

According to its publisher, it was the third all-slash Sentinel print zine published. 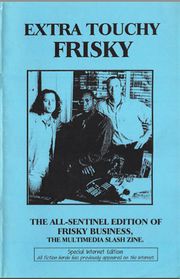 Extra Touchy Frisky 1 was published in January 1997 and is 60 pages long. The zine contains several black and white screencaps from the show.

This project is a bit of an experiment for us. All the stories in this zine have been 'published' already - on the Internet. There is a huge amount of talent out there, and some people who have e-mail have been discussing whether Internet Action will mean the death of paper fanzines. There are two (that I personally know of) all-Sentinel slash zines proposed, but most print zine editors do not accept previously-distributed fiction. Thus, we hope to find out now - is there a market for this kind of zine? Will people hesitate to buy fiction they can get for 'free' off the 'net? Or is this a good way to bring more people into a fandom, by reaching those who don't have Internet access? We shall see.... If this goes well, we may have a whole new series of zines on our hands! Until then, I'd like to thank the authors who have given permission for me to print their fiction here, and to thank them for sharing it in the first place. I'd like to thank James Walkswithwind, especially, for making a mailing list happen; it's resulted in a huge amount of fiction and discussion that I'm delighted with. And I'd like to thank Sharon for getting me into this fandom in the first place.

See reactions and reviews for Dancing.

See reactions and reviews for Sanctuary.

[zine]: Previously 'net published, of course. But it's so nice to have the best picks in a handy little digest sized 'zine. And the price!?! Can't beat it! Almost Foolproof Press is the publisher and main distributor, but the ETF 'zines can also be purchased through Agent With Style. I am pleased with both distributors, but am not endorsing one over the other.[1] 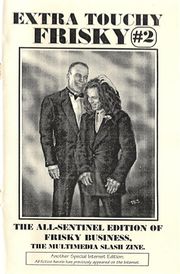 Extra Touchy Frisky 2 was published in May 1997 and contains 98 pages. It has a cover by TACS, one interior b/w illo by MegaRed, and several black and white screencaps.

Well, our experiment was a success! ETF#I sold well enough to convince us to do another issue - and the author's are prolific enough to support it, as well! So, here you go - more touching, more smelling, more sights and sounds... more love, Sentinel style!

Thanks, as always, to the authors for giving permission for us to reprint their work here. You'll be riding a rollercoaster of emotion here, so hung on!!

And stick around, because we have another issue planned for July, too.... 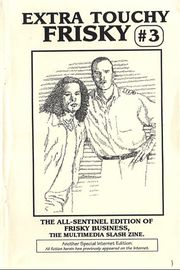 cover of issue #3, nominated for a STIFfie

Extra Touchy Frisky 3 was published in 1997 and contains 100 pages. The cover is by Maureen B.. It contains a black and white screencap. 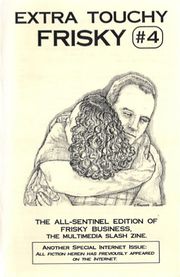 Extra Touchy Frisky 4 was published in January 1998 and contains 78 pages. The cover is by Maureen B..

Almost Foolproof Press had a slow 1997, but we're back on track now, and another issue of ETF will be out soon (like, in August!)... The Sentinel fandom seems to be a hot fandom, and we're glad to be able to spread some of this wonderful fiction around, so that you can hook more of your friends!

[Constitution Park]: Holiday stories are always fun. Even when they're a cause for angst, they have that kind of... impromptu... feel to them. And Constitution Park is--rare for Dean--not even an angsty one!

While the story starts out with a wonderfully caring Blair providing comfort for Jim's hurt, it ends up as a sweet, light, humor-filled "first time" story, with Jim and Blair moving from friends to lovers without all the usual angst and soul-searching.

Dean should maybe think about writing more light-hearted pieces. She has a good sense of romance, and Jim and Blair react in predictable ways that seem very true to their onscreen characters. And it's refreshing to see her Jim and Blair go into the sexual part of their relationship with a sense of fun--though it's been a little hot these days to think about reading sex like this.[2]

[zine]: These are wonderful little 'zines for carrying around. As the description notes they are previously 'net published, but they have picked some real gems to fill these bite sized 'zines with. I especially like them because they are so portable and they usually feature some of my fav authors such as Candy Apple, Legion, The Lady of Shalott....

Why you should buy this 'zine: As I said...portable! Top quality fanfic neatly compiled for us.

Why you shouldn't buy this 'zine: If you're really put off by printing errors, you might want to skip this one. Though it's minor, one page is printed crooked so that the words run off the page. But I can still read it. The Xerox machine needed a new drum, so there are light streaks down the sides of the pages. However, for no more than they ask for the 'zine, it was well worth the cost to me. I've carried mine around many times! [3]

See reactions and reviews for Hunger. 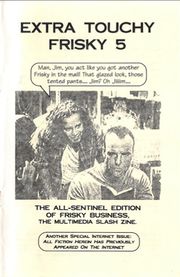 Extra Touchy Frisky 5 was published in 1998 and contains 80 pages.

This issue contains some powerful stories dealing with the events at the end of third season; Gone Native and Dream Deferred are two explorations of the effect Blair's dissertation may have on the guys' relationship. I've included some lighter pieces to balance things, and hopefully by the time the next ETF arrives, we'll have news of the series' return lo the air. To that end, I encourage everyone to drop a note to UPN to let them know that the viewers do remember The Sentinel, and we're waiting for it to return. 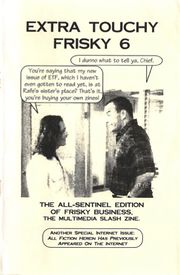 Extra Touchy Frisky 6 was published in 1999 and contains 80 pages. 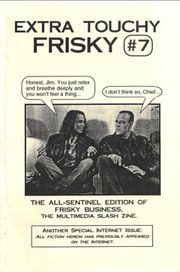 Extra Touchy Frisky 7 was published in 1999 and contains 80 pages. 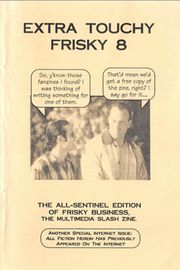 Extra Touchy Frisky 8 was published in 2000 and contains 76 pages.

[Anoint and its sequel Midnight Oil]: I really enjoyed this first time story, but I have to say the 2nd time sequel (Midnight Oil) is waaay hotter! Midnight Oil made me slip right out of my chair THUD, right on the floor. (All of Resonants stories are great, so read them all while your there.) The only thing I don't like about these two stories are the backgrounds. Ouch, hard to read.[4] 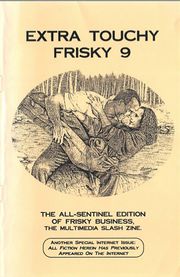 Extra Touchy Frisky 9 was published in 2000 and contains 78 pages. The front cover is by Larrkin. It contains several black and white screencaps.

See reactions and reviews for Dork.

[Anoint and its sequel Midnight Oil]: I really enjoyed this first time story, but I have to say the 2nd time sequel (Midnight Oil) is waaay hotter! Midnight Oil made me slip right out of my chair THUD, right on the floor. (All of Resonants stories are great, so read them all while your there.) The only thing I don't like about these two stories are the backgrounds. Ouch, hard to read.[5] 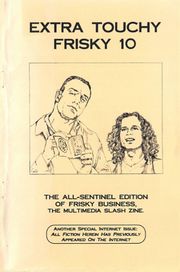 Extra Touchy Frisky 10 was published in 2000 and contains 90 pages. Cover by Geli.