Frisky Business is a series of slash zines published by Almost Foolproof Press. Some focus on individual fandoms and some are compilations.

It was the only zine that computed its specific fandom content by percentages. 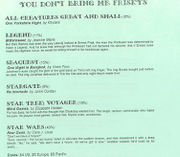 a 1997 flyer for an issue, is an example of content rated by percentages

The Title of the Series

It is very likely that the title of this series is a play on word of the 1983 Tom Cruise film "Risky Business."

The Friskys in Alpha Order

The Friskys in Publishing Date Order

According to Media Monitor and various flyers, these are some Friskys that were proposed and never made it to fruition.