Once, Twice, Three Times a Frisky

Once, Twice, Three Times a Frisky is a slash 144-page multifandom anthology. It contains the content of three Frisky zines that had originally intended to be published a standalone zines: 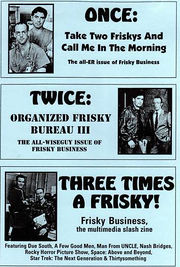 "As you can see, this is a compilation of three zines (ER, Wiseguy and Multimedia) in one. We didn't start out with the idea of running all three issues together, but when we started doing layout, we noticed we really didn't have enough of any collection to make a zine. However, after putting the three issues together, we were pleased to see what a great collection of stories and poetry we have here. We hope you enjoy them as much as we do."

The zine has three sections: a Wiseguy part, an ER part, that also contains the ER/Due South crossover Crossed Paths by Ruth Devero (published in the zine as "Ruth Elpin" according to the website version on the author's homepage) [1], and a third section that has stories from Due South, A Few Good Men, Nash Bridges, Man from UNCLE, Rocky Horror Picture Show, Space: Above and Beyond, Star Trek: The Next Generation, and Thirtysomething. 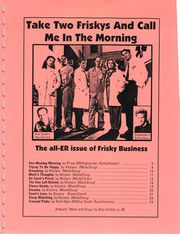 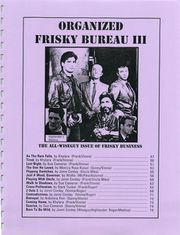 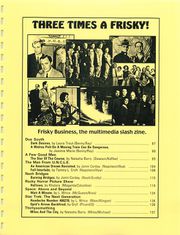