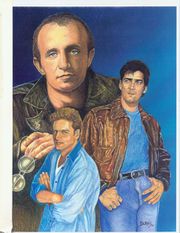 Organized Frisky Bureau 1 was published in 1994 and has 180 pages. Artwork by Anja Gruber, and a color cover and interior illos by Maureen B. Also included: poetry by Khylara and Michele Christian.

In 1994, Michelle Christian posted the following review to the Virgule-L mailing list. It is reposted here with permission:

"Over-all impression: Definitely better than average for a Frisky Business zine. It's WAY better than TERRANOVA SITUATION, certainly. (Although there is what is titled "TV Talk: a brief interrlude into the [TS] universe", but since it wasn't even a half page long, I guess I can deal.) The artwork is really the best thing about the zine: Except for one or two exceptions (one a flat portrait of Vinnie, the other a picture of Vinnie, Frank, and Roger "in the act"), all of the drawings are very well done. The cover is gorgeous at first glance, but really looking at it, it's a montage of individual pictures of Frank (Wonder if someone should inform Johnathan Banks of how popular his publicity photo is!), Roger and Vinnie; and I'm slightly surprised that the zine doesn't tip over onto its left side since all three of them are crowded over there!  :) I should mention that all the drawings excepot for one (the one Vinnie portrait previously mentioned) were done by [Maureen B.]. (End of art critique.)

I'm not getting into most of the stories: for the most part, they were fairly so-so with so-so writing. The exceptions were: "All Our Dreams" by Cicatrice du Veritas--A fairly solid post fourth season story about Frank not only going after Vinnie, but having help from the Bureau while he did it. Biggest problem: The appearance or mention of characters from other series without any substance. I've seen cross-pollunation (to borrow a phrase) in fan stories before that worked, but here, all they did was annoy me.

"Fork in the Road" by Katy Deery--kinda nice little vignette set in the early to mid days of the Proffit arc. It's a scene between Frank and Vinnie, btw. "Downbeat Memories" by [Mo B.]--Please, no Mo! (*ahem* Sorry.) This is one of two stories where a character William Russ has played in another series is introduced to us in a WG kinda thing. This is set in the series "The Middle Ages" that Rusty did with a male hustler named Vince (who has permanent nipple rings and penis piercing with a chain linking all three.) Request to all writers, no matter the fandom: no more "ANYBODY as a hooker" stories, please! (Can you tell this is a sore spot with me?)

"Lost on a Sea of Emotion" by [Mo B.]--Roger and Frank do it in Lynchboro. Biggest problem: "'And here I thought all this time, it was me you were interested in.' Roger pursed his lips [...] 'You know what, Buckwheat. [sic] I think you were fascinated with me because I was doin' to Vince what you wished you could do.'" Now, Roger has a very healthy ego, no doubt, but who would have ever thought that Frank seemed interested more in ROGER than in VINNIE? Hello, the clue-man's at the door.

"Alan Gets Restless" by Ann Teitelbaum--The other Rusty-in-another-show story. This one is "Boy Meets World". (Stop groaning.) Evidentlly somehow Alan, Frank and Vinnie know each other pretty well--well enough to invite the guy up to their cabin for a threesome which seems to be par for the course (and how does a manager of a grocery store get to be tight--if you'll pardon the phrase--with two FBI agents? Did he bag their groceries in an extra sexy way once?). Alan's wife doesn't mind him going off to the woods--he even makes a mental note to tell her before he leaves. Oh, and the interview scene with the guy applying for Night Supervisor at the grocery store (he was harrassed at his last job by his boss because he was openly gay. Of course.) is simply riveting.

"The Winter of His Discontent" by Darlene F.--a very long post-Seattle, post-4th season story. Yet another Roger/Frank/Vinnie story by the lady who gave us all TS. Actually, it does have some pretty nice bits in there and I do like her use of Prescott Wilson (you know, the guy who owned Dawn Valley, Utah, in the D.C. arc). And Vinnie isn't half the wuss he is in TS. All in all a little too sappy on some stories, just a little too lame on others, with a few glimmers here and there. 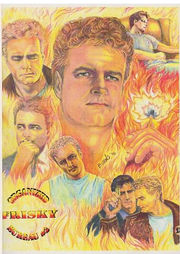 cover of issue #2 by Maureen B.

Organized Frisky Bureau 2 was published in 1996 and has 160 pages. It has a color cover by Maureen B..

In 1996 a fan submitted the following review to the Virgule-L mailing list. It is reposted here anonymously:

"Standard disclaimer: this is a review. Strictly my opinions and my biases. If reviews bother you -- STOP reading NOW. I know some of the authors mentioned below are on this list. If my review of your work offends you, I apologize in advance. <end disclaimer>

Organized Frisky Bureau 3 was intended to be published as a stand-alone zine but its contents were later published in Once, Twice, Three Times a Frisky.