Lie Perdu is a Jim/Blair story by Sihaya Black. It has a sequel, Lock 'n' Load

It was published in Extra Touchy Frisky #10 and is online. 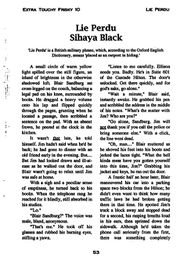 Sihaya Black approaches the relationship between Jim and Blair from roughly the same direction as Legion, and her sex scenes are just as steamy and the underlying affection and tenderness just as palpable. She does prefer, however, to show Blair on top and call attention to Jim's emotional - and often physical - vulnerability during sex play. During sex, Jim's walls crumble and Blair - and the reader - can look directly into his heart. The initial setting of "Lie Perdu" requires a bit of a suspension of disbelief since the situation seems a bit too much construed, but the author's prose and the clear affection for the characters shine through. [1]

In “Lie Perdu,” Blair receives a call one night from an unknown man who says: "Listen to me carefully. Ellison needs you. Badly. He's in Suite 601 of the Cascade Hilton. The door's unlocked. Get there quickly, and for god's sake, go alone."

With an opening like that, anything could have happened. Blair rushes out into the night, not knowing if he’s headed into a trap, and ends up helping Jim out of a very compromising position. What follows is a steamy premise, leading to masturbatory fantasies, and finally to more blisteringly hot sex. And there’s even more of the hot and steamy in its sequel, “Lock ‘n’ Load.”

Not only is this a scorcher of a story, but it’s a wholly believable one, as well. Jim’s mortification at Blair’s having to rescue him from the situation he’s placed himself in is sharp and totally in character. And Blair walks a very fine line which demarcates friendship and what’s above and beyond the call of duty. Sihaya Black’s a talented writer with a knack for characterizations that are right on the money. On top of that, she totally gets that it’s not about subs and doms, but that it’s about trust.

Jim filled with longing for Blair. Mmmm, shiver. Jim so desperate for his Guide that he sleeps with someone else and tries to pretend it's him. Big, big shiver. Jim all tied up, at Blair's sensual mercy. Dead faint. [3]

This is one of the first stories of this type I ever read and it introduced me to the incomparable writing of Sihaya Black. I had never been a fan of stories with kink, but this changed my mind. It's a first time story, a rescue story, a bdsm story and was probably the first story I read in which an author explores the side of Jim Ellison that might want to be tied up and dominated. Sihaya Black does this on more than one occasion, but this introduction remains the story I have gone back to re-read the most. [4]