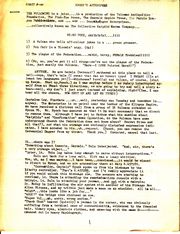 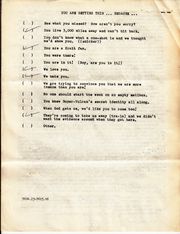 back page, You are Receiving this Zine Because

Spock's Arthropods is a 14-page parody of the Star Trek Kraith universe written by a group of Star Trek fans and mailed to US fans in June 1976.

From the first page:

"The following is a joint.....is a production of the Tolemac Antiquities Foundation, the Plak-tow Press, The Emerald Empire Press, The Purple Dragon Press, and.....and.....Doppelganger Enterprises....collectively known as The Collective Katydid Karma Company."

In the upper left corner the story was numbered "KRAITH #-00" in reference to the Kraith series byzantine numbering scheme.

From Boldly Writing: "Eileen Roy and Signe Landon got an idea for a parody of Kraith, and with the help of other fans put together a small (13 paged) photocopied booklet called Krait—Spock's Anthropods. As a take-off on Kraith's numbering system (examples: IIa, IIIb), the number of this installment was the symbol for infinity."

I have no idea [if Jacqueline Lichtenberg knew about our parody of Kraith called Kraith: Spock’s Anthropods ]. I certainly hope so! I mean, you know – Again, she was writing for fandom. She wasn’t a professional, published author getting paid big bucks or money or anything. She was writing in fandom. She was a fellow fan, and no one took themselves too seriously, or hardly anyone did. A lot of the fun we had was parodying Star Trek, parodying Star Wars, parodying that got too big in fandom and Kraith was certainly a big thing there. Writing filk songs, which were horrible parodies, oh my God. And a lot of them were filthy, too. [laughs] I find it hard to imagine now, maybe times are different now, but I find it hard to imagine that she wouldn’t have known about it, and she wouldn’t have been offended if she did. I think she would have laughed her head off because it was very, very funny. I’ve done a lot of them. I mean, these weren’t written because we didn’t like something; they were written because we loved it, and we were poking fun at it in the most loving, possible way, you know. [1]